It was raining in Sakon Nakhon as of 6pm Thailand time, July 25, but the actual tropical storm was still in Vietnam. Thus, there is a lot more rain still to come. / Weather Underground

The Meteorological Department has just reported that tropical storm “SONCA” made landfall over Dong Hoi, Vietnam at 4pm. The Department of Disaster Prevention and Mitigation (DDPM) warned 43 provinces in upper Thailand to brace for the impact of the storm.

The Meteorological Department has just reported that tropical storm “SONCA” made landfall over Dong Hoi, Vietnam at 4pm. It is moving westward slowly with maximum sustained wind about 65 km/hr. It is forecast to downgrade to tropical depression over Laos then move through northeastern Thailand.

Here are the Thai provinces that should be affected in some way over the next two days:

The Meteorological Department warned Monday that tropical storm Sonca will trigger torrential rain in much of Thailand Tuesday and Wednesday, while the Department of Disaster Prevention and Mitigation (DDPM) warned 43 provinces in upper Thailand to brace for the impact of the storm.

Centred in the South China Sea close to Vietnam Monday, Sonca was expected to taper into a tropical depression and then a low pressure cell as it moves past neighbouring Laos into Thailand's North and the Northeast, said the department.

Sonca is the fourth tropical storm in the South China Sea so far this year.

Certain provinces in the North, Northeast and the East were likely to be hit by Sonca today and tomorrow.

A smaller number of them will still be affected on Thursday and Friday, the department said.

People living in these provinces are being advised to prepare for possible flash floods.

The DDPM also warned 43 provinces to stay on high alert around the clock for possible natural disasters that may occur until Thursday as a result of Sonca.

People living at the foot of a hill, in low-lying areas and in coastal areas are being warned to prepare for evacuation when necessary, said Chatchai Phromlert, director-general of the DDPM.

Meanwhile, water in the Mekong River in many districts of Nakhon Phanom, Bung Kan and Kalasin was diverted to smaller waterways Monday, to prepare for more rain from the tropical storm. Those living near river banks are advised to keep a close watch for rising water levels.

In Chiang Rai, certain parts in Muang, Mae Fa Luang and Phan districts have already experienced flooding and landslides. Floods about 20 centimetres to 1 metre deep were reported in tambon Bua Sali in Muang district as run-off continued to flow into those districts. 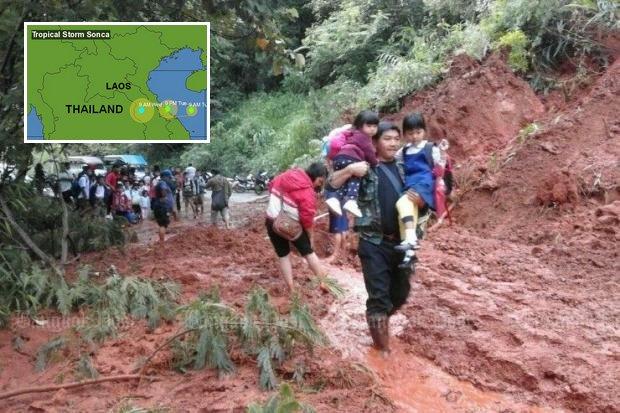 A man carries his daughters to higher ground as heavy rains in Chiang Rai province cause landslides and floods. (Post Today photo)

Suchat Charoensri, director of the 12th Royal Irrigation Office in Chai Nat, said a rise in water coming into the Chao Phraya dam pointed to the need for the dam to release water at a higher rate. That is expected to lead to a rise in water levels downstream of between 15cm and 25cm.

People living in Ang Thong and Ayutthaya provinces in particular are being warned to prepare to deal with possible flooding.