Napapa “Patt” Tantrakul is surrounded by news reporters as she arrives at the Criminal Court for the final time on Monday. (Photos by Pornprom Satrabhaya)

Actress Napapa “Patt” Tantrakul reported to the Criminal Court for the final time on Monday after prosecutors dropped charges against her of money-laundering and involvement in drug smuggling. 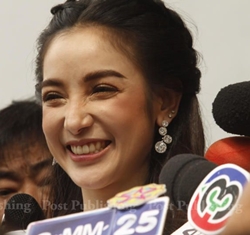 A smiling Ms Napapa said her worries had 50-60% disappeared.

Actress Napapa “Patt” Tantrakul reported to the Criminal Court for the final time on Monday after prosecutors dropped charges against her of money-laundering and involvement in drug smuggling.

Ms Napapa was in May summonsed to report to the Narcotics Suppression Bureau (NSB) after 1.9 million baht was found to have been wired to her bank account in installments by her husband Akarakit Worarojcharoendet, who faces trial for helping launder money for the alleged drug smuggling ring led by Lao national Xaysana Keopimpha.

She was subsequently charged by police.

The prosecutors announced last Thursday they would not  indict Ms Napapa on the charges because the police case report presented no solid evidence of any wrongdoing.

A smiling Ms Napapa said her worries had  50-60% disappeared. Previously she had to report to the court every 12 days, although she had spent her life normally after being investigated.

Her lawyer Arkhom Kongsawat said they would now wait for a decision by national police chief Chaktip Chaijinda whether he would appeal the prosecutors’ decision.

If the police chief decided to challenge the decision, the case would be forwarded to the Office of the Attorney-General for a final determination.

Ms Napapa has been returned her 500,000 baht bail surety.

Ms Napapa took her 6-month-old son to the court on Monday, and the family had an opportunity to meet there. Mr Akarakit, who is being held in custody, was at the court for the pretrial examination of evidence and witness lists.