The uncovering of this new hotel building, with its unusual design, sparked fears it could be about to fall. (Photos by Patipat Janthong)

A social media alert that a high-rise under construction near Ploenchit intersection appeared to be leaning over stirred brief panic on Tuesday.

A social media alert that a high-rise under construction near Ploenchit intersection appeared to be leaning over stirred brief panic on Tuesday, but it was just the unusual design being revealed as the contractor removed the covering. 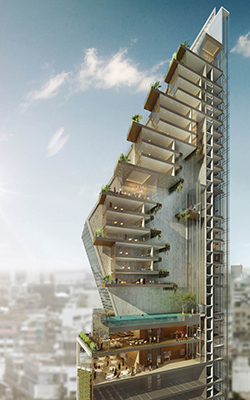 An artist's impression of the building. (Supplied photo)

A Twitter user posted photos of the Pathumwan building with a hashtag for JS100 traffic radio, saying that it appeared to be leaning towards the adjacent high-rise condominium building, Noble Ploenchit.

The images were rapidly shared, along with people's comments on the "leaning" building.

According to a report in Thai media, the panic ensued after some scaffolding collapsed and workers ran from the site. People looking from outside gained the impression the building was leaning over.

However, the project engineer later told reporters the architect designed it that way, to reflect the hand movement of the wai.

The 33-storey building is being developed by Rende Ploenchit Hotel Co, will be known as Rosewood Bangkok, have 159 rooms and is scheduled to open in 2019, according to its website.

Pathumwan district director Morakot Sanittangkul said officials were sent to check the building and found no indication it was actually leaning over or subsiding. It was the building's design.

She said the building was designed with a slope from the 10th floor up to the 33rd floor. The contractor, Ritta Co, had merely removed the protective scaffolding from around the building, and some people had wrongly jumped to the conclusion it might collapse. 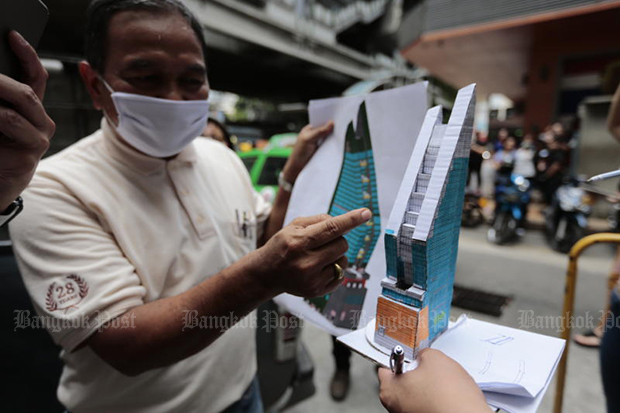 A Ritta employee shows a model of the building.

Noppadol Chaipanya, director of building control at the city's Public Works Department, said the building had construction approval. The slope was only on the exterior, and the interior was a normal building structure.

Officials from Pathumwan district inspected the construction every 15 days to ensure it followed the approved blueprint, he said.