Has the recently finished restoration of the stupas at the Temple of the Dawn really diminished their traditional beauty as some social media critics claim? Photos by Patipat Janthong

The restoration at Wat Arun has removed its familar dark-green colour because it was actually caused by stains left by moss.

The Fine Arts Department and the assistant abbot of the Temple of Dawn or Wat Arun deny claims the latest restoration of its iconic stupas have diminished the traditional beauty of the structures.

Department chief Anandha Chuchoti insisted yesterday the post-restoration white facade of the stupas was no different from what appeared after the previous restoration during the reigns of King Rama IV and V.

Assistant abbot Phra Sakkaya Puttiyawong explained the dark-green colour which was familiar to visitors to the famous temple resulted mainly from "stains left by moss" which was removed after the five-year restoration revealing the white exterior of the stupas. 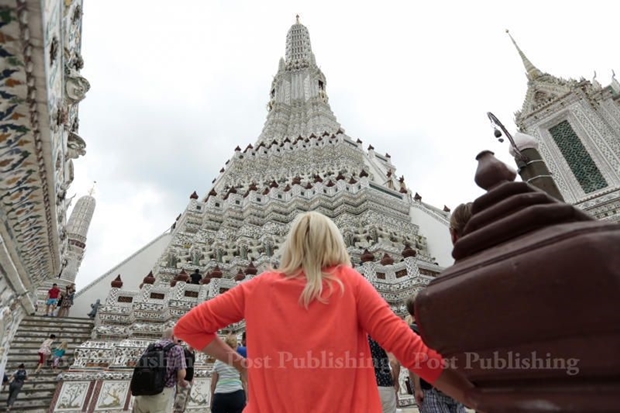 They were responding to criticism in social media about the quality of the restoration. The temple, built during the Ayutthaya period, has undergone many repairs, but the latest effort that started in 2013 was the biggest restoration project in 100 years, according to Phra Sakkaya Puttiyawong.

The stupas were surrounded by scaffolding as workers repaired sculptures of mythological figures around and on the stupas, replaced decorative tiles and re-paved parts of the stupas' surface with lime. "They cleaned moss-tainted stupas and restored the surface," the assistant abbot said. "This whitened the stupas, returning them to their original beauty," he added.

The Temple of Dawn, formally known as Wat Arun Ratchawararam, has five stupas standing on the banks of the Chao Phraya River. The main stupa is the tallest one surrounded by smaller stupas that form four corners. 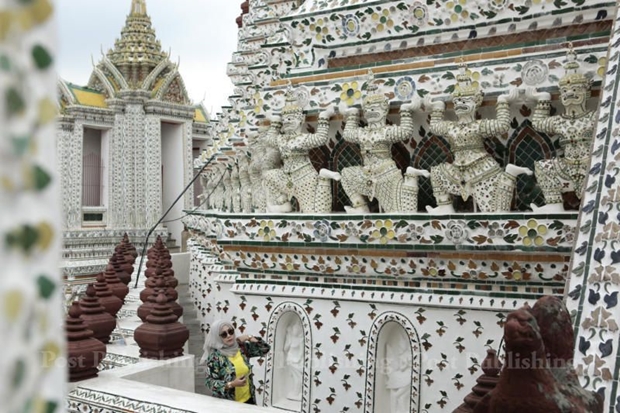 Experts said the landmark is not only a sacred place for Buddhist worshippers, but it is also an iconic Bangkok attraction. Many visitors climb the steep stairs of the stupas for a panoramic view of surrounding landmarks. "This is why the Fine Arts Department made sure it worked carefully on the restoration which was completed this year," Mr Anandha said.

The department's experts first surveyed the ancient stupas, collecting information about decorative patterns on the tiles as well as colours, to preserve as much of the integrity of the original design and look as possible. During the restoration, about 40% of deteriorated tiles, or about 120,000 out of the total of 300,000 pieces, were replaced with new ones. This means 60% of the old tiles are still intact, Mr Anandha said.

"But we can't deny some surfaces had to be reworked which may have affected the original patterns, which has left certain exterior spots visibly unclear," he said. His department will re-examine some spots which may need further repairs, he added.