Houston flooding nightmare to get even worse (Updated)

This is what a Bangkok freeway could look like during a storm like Harvey. Downtown Houston and submerged highways are seen August 27, 2017 as the city battles with tropical storm Harvey and resulting floods. / AFP PHOTO / Thomas B. Shea

What would happen if Bangkok were to be hit by 600 millimetres of rain in one day? Low-lying Houston, Texas is struggling to survive as tropical storm Harvey stalls and rain is expected throughout the week.

Harvey is one of those nightmare storms that might or might not be related to climate change. The storm hits land with ferocious winds and unleashes torrents of rain as it slowly moves inland and then stalls. It is unclear how much longer Texas, Louisiana and Arkansas residents will have to put up with the storm, but forecasters say it will be at least until Friday.

The Associated Press says that flood prevention reservoirs are rapidly filling, requiring water to be released to prevent dams from collapsing. You might remember the same thing happened in Thailand during the great floods of 2011. 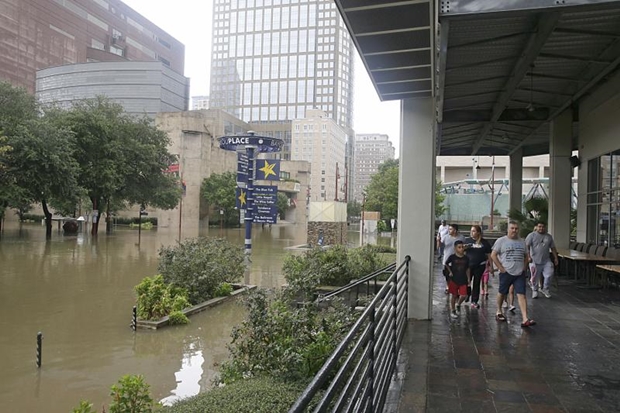 AP – Residents living near the Addicks and Barker reservoirs designed to help prevent flooding in downtown Houston, were warned Sunday that a controlled release from both reservoirs would cause additional street flooding and could spill into homes. Rising water levels and continuing rain was putting pressure on the dams that could cause a failure without the release.

The Army Corps of Engineers early Monday started the water releases at the reservoirs ahead of schedule after water levels increased dramatically in a few hours' time, a Corps spokesman said. The timetable was moved up to prevent more homes from being affected by flooding from the reservoirs, Corps spokesman Jay Townsend said. He added that water levels were rising at a rate of more than six inches (15cm) per hour in both reservoirs.

The city's two main airports suspended all commercial flights and two hospitals were forced to evacuate patients. A local television station also was knocked off the air.

At least three people have been killed so far, with reports of other fatalities still unconfirmed.

The National Hurricane Center called the flooding "unprecedented" and said the storm, which crashed ashore late Friday as a huge Category 4 hurricane, would move into the Gulf of Mexico before doubling back midweek, bringing more rain.

Rising waters from Harvey inundated roads throughout the Houston area, affecting every major freeway and hamstringing efforts to move people to safety. 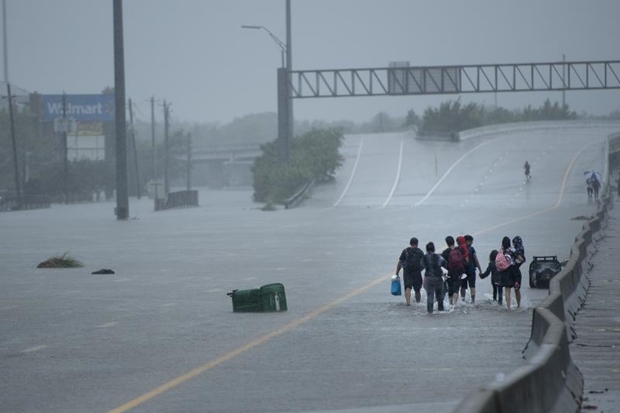 Evacuating residents from the Meyerland area walk onto an I-610 overpass for further help during the aftermath of Hurricane Harvey August 27, 2017 in Houston, Texas. / AFP PHOTO / Brendan Smialowski

"It's crazy to see the roads you're driving on every day just completely under water," Houston resident John Travis told AFP.

Another city resident, Brit Dreger, said: "It doesn't look like we're going anywhere for a while."

Overwhelmed emergency services warned residents to head for high ground or climb onto rooftops – not into attics – so they could be seen by rescue helicopters. More than 1,500 rescues had been made so far.

Emergency 911 operators in Houston received 56,000 calls in a 15-hour span – seven times more than in a usual full day.

"The number of evacuees is increasing. The number in harm's way will increase also with the rain that is forecast to come," Texas Governor Greg Abbott said, adding that the storm had already inflicted billions of dollars in damage. 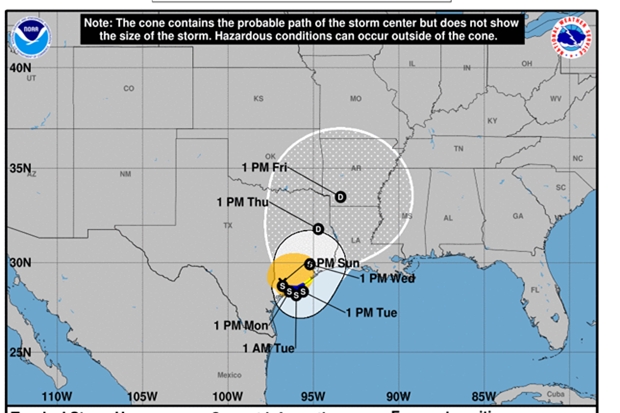 Weather forecasters expect little movement from the storm over the next few days as the Gulf of Mexico continues to feed in moisture. / US National Hurricane Center

The National Weather Service said more than two feet (600 millimetres) of rain fell in Houston and nearby Galveston in a 24-hour period. Another 20 inches (500 millimetres) were expected .

Flooding was expected to worsen as Harvey, the most powerful storm to hit the United States mainland since 2005, lingers over the area.