The home of K-Pop is an anxious place these days as South Koreans increasingly question the country's dependence on the US for defence.

Pyongyang on Sunday triggered global alarm with by far its most powerful test to date, after it claimed it had successfully tested a hydrogen bomb that could be mounted onto a long-range missile, which analysts say is a major advancement in its nuclear programme.

The South, which hosts 28,500 US troops to defend it from the North, is banned from building its own nuclear weapons under a 1974 atomic energy deal it signed with the US, which instead offers a "nuclear umbrella" against potential attacks.

But growing nuclear and missile threats from its belligerent northern neighbour is prompting some in the South to call for its own nuclear armament. 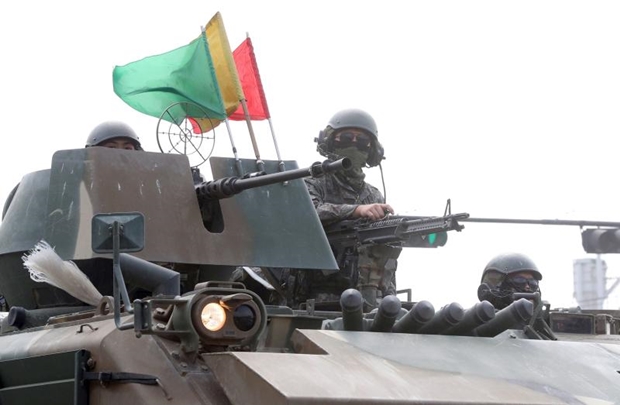 South Korean soldiers sit on the top of a military armoured vehicle on the road in the border city of Paju on September 3, 2017. The "artificial quake" in North Korea on September 3, thought to be its sixth nuclear test, was five to six times more powerful than the tremor from Pyongyang's fifth test, the South's weather agency said. / AFP PHOTO / DONGA ILBO

"As nuclear weapons are being churned out above our heads, we can't always rely on the US nuclear umbrella and extended deterrence," the mass-circulation Donga Ilbo newspaper said in an editorial Monday.

The US stationed some of its atomic weapons in the South following the 1950-53 Korean War, but withdrew them in 1991 when the two Koreas jointly declared they would make the peninsula nuclear-free.

That pact was no longer binding, the editorial said, and added: "There is no reason for us to cling onto the declaration when it has become the 'denuclearisation of South Korea', not the denuclearisation of the Korean peninsula".

The Seoul government should not "hesitate" in reintroducing US tactical nuclear weapons as well as building its own atomic devices.