Hurricane Irma ripped through the Caribbean on Friday, leaving a trail of devastation and killing 12 as it barreled towards the United States where up to a million people were told to flee.

Hurricane Irma ripped through the Caribbean on Friday, with its violent winds and torrential rains leaving a trail of devastation and killing 12 as it barreled towards the United States where up to a million people were told to flee.

With the monster storm expected to reach the American south by the weekend, coastal areas of Florida and Georgia were battening down and carrying out the biggest evacuation since 2005. 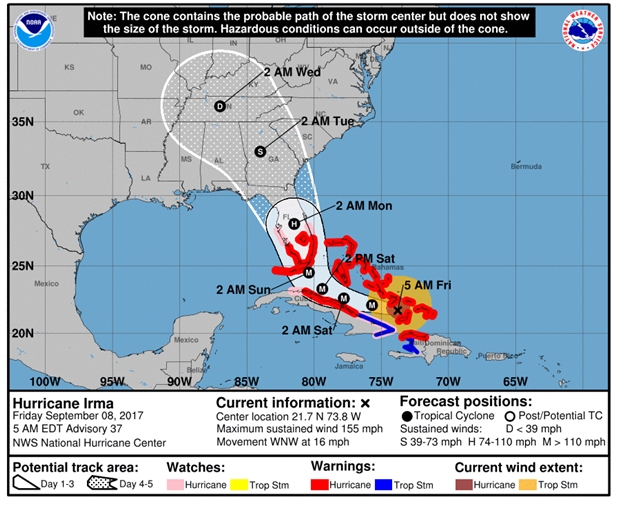 Those red lines are warnings, not the path the storm is expected to take. (Graphic from US National Hurricane Center)

"The entire southeastern United States better wake up and pay attention," warned US federal emergency chief Brock Long. "It will be truly devastating."

Barreling across the Caribbean, the rare Category Five storm laid waste to a series of tiny islands like St Martin, where 60 percent of homes were wrecked, before slamming the US Virgin Islands and Puerto Rico.

As it raged westwards, Irma packed winds of up to 295 kilometers per hour, an intensity it sustained for 33 hours – the longest of any storm since satellite monitoring began in the 1970s.

On many islands, violent winds had ripped roofs or facades off homes and businesses, tossing cars and even shipping containers aside like matchsticks.

The storm gets worse and worse as it pummels the Virgin Islands.

So far, 1.2 million people have been affected by Irma, the International Red Cross said.

But that number looks set to rise – possibly reaching as many as 26 million.

Florida is expecting to face the brunt of the hurricane from Sunday, with forecasters warning of storm surges of up to 25 feet (almost eight meters) above normal tide levels. 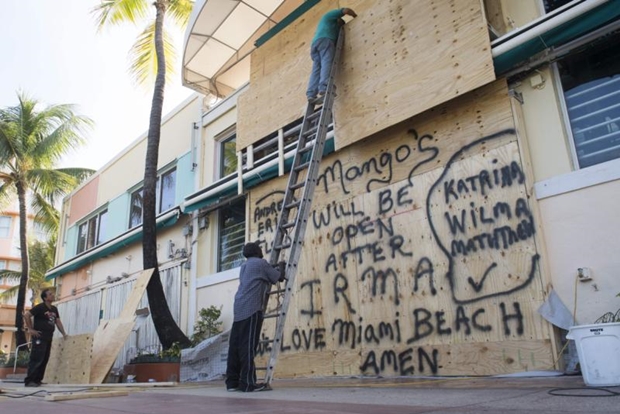 Workers hang plywood in front of doors and windows at Mango's, a salsa club, following mandatory evacuation orders in Miami Beach, Florida, September 7, 2017, ahead of Hurricane Irma. Hurricane Irma will have a "truly devastating" impact when it slams into southern coastal areas of the United States, the head of the US emergency agency said. / AFP PHOTO / SAUL LOEB

Tourists in the popular Key West islands were packing their bags on a mandatory evacuation order, with a similar order for residents due to follow.

"We can't save you once the storm starts," Governor Rick Scott told a press conference.