After killing at least nine people in the Caribbean, Maria slammed into Puerto Rico's southeast coast at daybreak before churning across the US territory which is home to 3.4 million.

As tens of thousands of people hunkered down in shelters in the capital San Juan, Mayor Carmen Yulin Cruz broke down in tears as she spoke of the utter devastation she had witnessed. 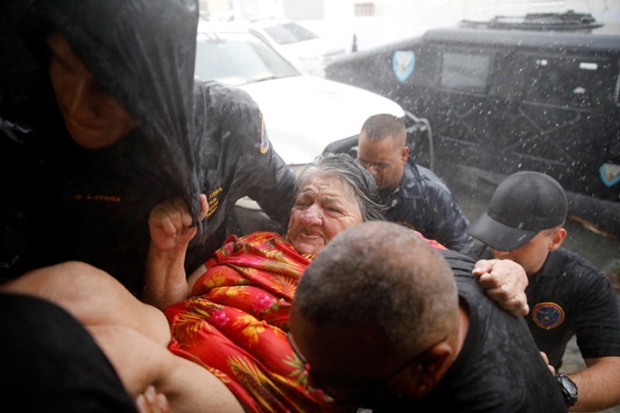 Rescue workers carry a woman into the Emergency Operation Centre after the the area was hit by Hurricane Maria in Guayama, Puerto Rico September 20, 2017. REUTERS/Carlos Garcia Rawlins

"Many parts of San Juan are completely flooded," Yulin Cruz told reporters in one of the shelters whose roof swayed as she spoke.

"Our life as we know it has changed... There is a lot of pain and a lot of devastation."

Maria made landfall as a Category Four storm on the five-point Saffir-Simpson scale, initially packing winds of a little over 240 kph before easing slightly as it powered towards San Juan.

"The wind sounds like a woman screaming at the top of her lungs!" Mike Theiss wrote on Twitter, sheltering in a safe room in the eye of the storm.

"We are getting absolutely hammered right now."

Imy Rigau, who was riding out the storm in her apartment in San Juan, said water had "cascaded" through her ceiling.

"We are taking refuge in the hallway as there is about a foot of water in my apartment," she told AFP.

"I boarded up the windows but with all of this, it seems they are going to be blown away. One of them was smashed up, so we are here in the hallway where there are no windows."

Many of the most vulnerable of Puerto Rico's residents took cover in the 500 shelters set up around the island, with officials warning of life-threatening floods.

"There is no power on the island and there is very little communications," according to Ricardo Castrodad, a public health official with the US Coast Guard's San Juan sector.

The US and British Virgin Islands – still struggling to recover from the devastation of Irma – are also on alert, along with the Turks and Caicos Islands and parts of the Dominican Republic. 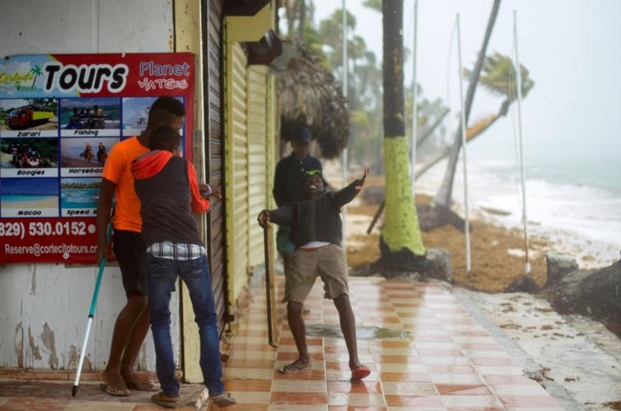 Young men take cover as winds lash the coastal city of Punta Cana, in the Dominican Republic, the eastermost tip of the La Espanola island it shares with Haiti, as Hurricane Maria approaches on September 20, 2017. / AFP PHOTO / Erika SANTELICES

Maria has already torn through several Caribbean islands, leaving at least seven people dead on the island of Dominica.

Communications to Dominica have been largely cut, and its airports and ports have been closed.

But an advisor to Prime Minister Roosevelt Skerrit, who spoke to the premier by satellite phone, painted a picture of devastation on an island that is home to around 73,000 people.

"It's difficult to determine the level of fatalities but so far seven are confirmed, as a direct result of the hurricane," Hartley Henry said in a statement.