A boy carries a durian fruit at a durian market in Bangkok. REUTERS/Sukree Sukplang/File Photo

Scientists in Singapore say they have mapped the genome of the durian and can now answer why it is the world's smelliest fruit.

Secrets of the durian yield to science

WASHINGTON, Reuters – Scientists have answered one of nature's most pungent questions: what gives the world's smelliest fruit its distinctive aroma.

Scientists in Singapore said on Monday they have mapped the genome of the durian, known throughout Southeast Asia as the "king of fruits" for its unique smell, flavour and formidable spiny appearance.

They identified a group of genes responsible for odour compounds called volatile sulphur compounds, and found that these genes become highly activated as the fruit ripens, driving its unusual smell.

"The durian smell has been described as a mix of an onion-like sulphury aroma with notes of sweet fruitiness and savoury soup-seasoning. A key component of the durian smell are volatile sulphur compounds, or VSCs, which have been characterised as decaying, onion-like, rotten eggs, sulphury and fried shallots," said geneticist Bin Tean Teh, deputy director of the National Cancer Centre Singapore, co-leader of the study published in the journal Nature Genetics.

Unlike other plant species that typically have one or two copies of these genes, this species boasted four copies, demonstrating that VSC production is, as Teh put it, "turbocharged" in durian fruits.

The researchers said this odour may be important to the durian in the wild, helping to attract animals to eat it and disperse its seeds.

The scientists sequenced the genome of the Musang King variety of durian, discovering it has about 46,000 genes, nearly double the number in the human genome.

They were able to trace the evolution of the fruit back 65 million years, finding an ancient relationship to the cacao tree, whose seeds produce chocolate. 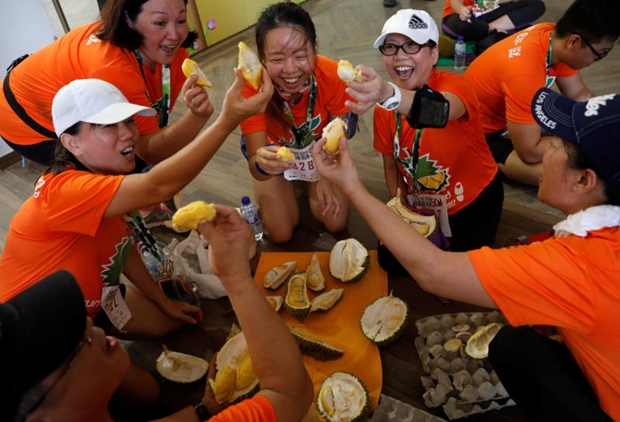 "Most of us in Singapore have grown up with the durian, and we are very familiar with it," said geneticist Patrick Tan, a professor at Duke-NUS Medical School in Singapore. "However, even within the same family, there are individuals that love the taste, while others have learned to simply tolerate it, especially during durian season. For those who have never experienced durian before, it can indeed elicit opposing emotions of devotion and revulsion."

The researchers said there are at least 30 other durian species, some edible, some inedible, and some with other distinctive features. Several are endangered.