A California Highway Patrol handout aerial image of one of the ongoing wildfires near Santa Rosa, California, USA, 09 October 2017 (issued 10 October 2017). Multiple wildfires are scattered through out Napa, Sonoma and Mendocino counties, leaving at least 10 people dead and destroying homes and businesses in their path. EPA-EFE/CALIFORNIA HIGHWAY PATROL

Newly homeless residents of Northern California took stock of their shattered lives Tuesday while the blazes that have killed at least 17 people and destroyed more than 2,000 homes and businesses kept burning.

SANTA ROSA, Calif. (AP) — The flames that raced across California wine country left little more than smoldering ashes and eye-stinging smoke in their wake. House after house is gone, with only brick chimneys and charred laundry machines to mark sites that were once family homes.

The wildfires burned so hot that windows and tyre rims melted off cars, leaving many vehicles resting on their steel axles. In one driveway, the glass backboard of a basketball hoop melted, dripped and solidified like a mangled icicle.

Newly homeless residents of Northern California took stock of their shattered lives Tuesday while the blazes that have killed at least 17 people and destroyed more than 2,000 homes and businesses kept burning. Hundreds more firefighters joined the battle against the uncontained flames.

The wildfires already rank among the five deadliest in California history, and officials expected the death toll to increase as the scope of destruction becomes clear. At least 185 people were injured during the blazes that started Sunday night. Nearly 200 people were reported missing in Sonoma County alone.

Seventeen wildfires raged Tuesday across parts of seven counties. Fire crews and other resources were being rushed in from other parts of the state and Nevada.

More than 240 members of the California National Guard helped ferry fuel to first responders because so many gas stations were without power. Guard members were also helping with medical evacuations and security at evacuation centers, said Maj. Gen. David Baldwin. 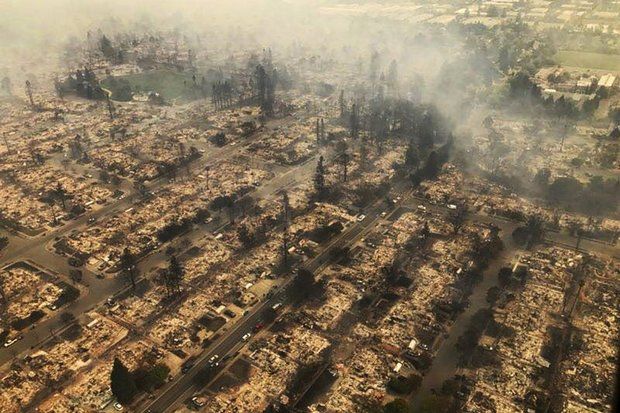 This aerial photo provided by the California Highway Patrol shows some of the hundreds of homes destroyed by the wildfire burning near Santa Rosa. (CHP Golden Gate Division via AP)

The fires that started Sunday night moved so quickly that thousands of people were forced to flee with only a few minutes of warning. Some did not get out in time.

``It's literally like it exploded. These people ran out of their homes literally with minutes notice, barely with the clothes on their back,'' Ken Pimlott, chief of the California Department of Forestry and Fire Protection, said, adding that authorities didn't have time to give more notice. ``They burned so quickly, there was not time to notify everybody.''