Victims reportedly paid more than 500 million baht to at least three scam artists who convinced them that Ganesha (above) and other 'sacred' talismans were authentic and specially blessed. (Photos by Thiti Wannamontha)

The CSD has arrested three suspects who allegedly lured people into buying what they claimed were talismans from India and Myanmar, in a scam that incurred more than 500 million baht in damages.

The Crime Suppression Division (CSD) has arrested three suspects who allegedly lured people into buying what they claimed were talismans from India and Myanmar, in a scam that incurred more than 500 million baht in damages.

They advertised on the Facebook page of one of the suspects, Sumali Loetwilai, a range of objects including statues of Ganesha (a Hindu god with an elephant head) and kritsana (agarwood) and jade pendants said to have been made sacred in a seven-day ritual. However, the objects they sold turned out not to be what they claimed, according to CSD investigators.

The valuable wood they advertised was just "bamboo and bean plants" while the jade was not authentic, deputy CSD chief Pol Col Chakhrit Sawatdi said Monday, referring to inspections conducted by experts from the Royal Forest and Mineral Resources departments. 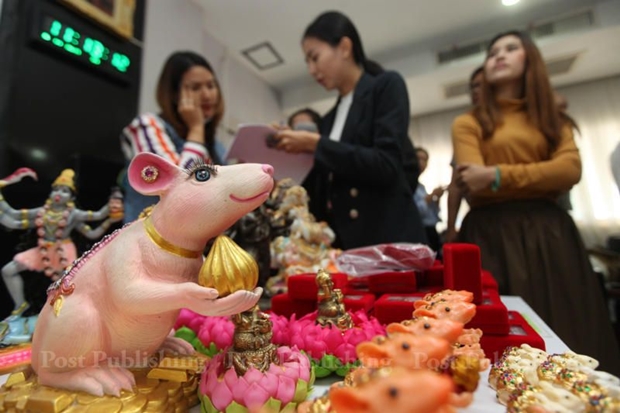 Officers tracked down their online activities and whereabouts after receiving complaints from many people who bought the objects for good luck and resale purposes.

The suspects include a couple – Sumali Loetwilai, 32, and Prachuap Sunaphot, 34 – arrested in Chiang Rai's Muang district, and another woman identified as Phanit Malithong, 40, nabbed in Chumphon's Muang district.

According to an initial investigation, the couple allegedly colluded to run the scam while Ms Phanit helped them open bank accounts that were used in transactions.

Officers charged them with cheating people and violating the Computer Crime Act, but the trio denied the allegations.

One victim Prawinnut Chaprasoet, 33, said she was lured in by an advertisement on Sumali Loetwilai's Facebook page selling a Ganesha statue at 3,990 baht, boasting of it as a "wealth booster".

That was how she came to know Ms Sumali, who later suggested she become a sales representative. Ms Prawinnut agreed to the deal in which she would buy talismans from Ms Sumali in bulk and resell them for a profit of about 1000 baht each.

She spent several million baht buying the objects from Ms Sumali for this venture. She later opened a Facebook page called "Pumpuy Apple Shop" to sell the objects and based her shop in Phuket, her home province.

Ms Prawinnut, who sold the products to many of her relatives and friends, said she felt guilty when she learned they were fake. She had been reselling the talismans for seven months, causing more than 10 million baht in damages.