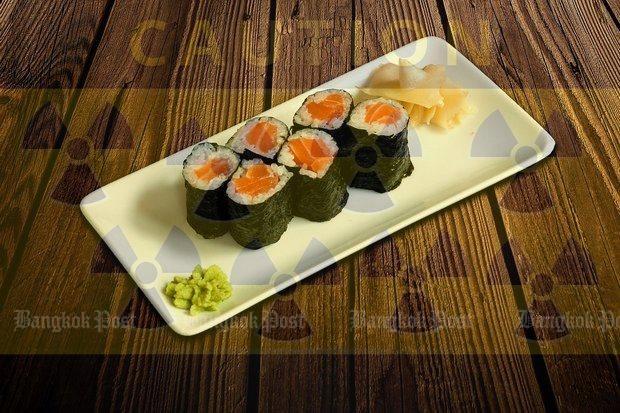 Everyone says it's perfectly safe, but just to be sure, consumer groups want the names of Bangkok restaurants serving sushi made from fish caught in the area of the Fukushima nuclear plant disaster in 2011.

Consumer advocacy groups have called on the authorities to give the names of 12 Japanese restaurants that serve fish imported from Fukushima in Japan for the sake of public safety.

The demand came despite Thai authorities asserting that the imported fish is safe for human consumption.

According to a recent news report by the Japan Times, Thailand is the first country to import fish from the area since the March 2011 nuclear crisis in the area.

A 110kg shipment of fresh flatfish was sent to Thailand from a port in Soma on Friday, to be served at 12 Japanese restaurants in Bangkok.

The shipment is the first such export since the nuclear crisis, according to the report which raised concerns about radioactive contamination.

The Stop Global Warming Association has urged the Food and Drug Administration (FDA) to protect consumers by revealing the names of importers and restaurants and calling on those eateries to put up a sign that they serve "fish from Fukushima".

"This is to help diners make an informed decision. If no action is taken, the association will consider taking legal action against the parties involved," it said.

Saree Ongsomwang, secretary-general of the Foundation for Consumers, also called on authorities to reveal the names of the restaurants and re-examine the imports as well as urged the restaurants to delay further shipments from Fukushima.

The FDA and the Fisheries Department jointly held a press conference to insist on the safety of the imported catches.

FDA secretary-general Dr Wanchai Satayawutthipong said the FDA has a set of strict regulations on the import of radiation-tainted food including safety limits and certificates of origin requirements.

The FDA has worked closely with the Japanese health authorities to ensure the safety of imported food, he said.

According to Dr Wanchai, the Japanese Health Ministry last year examined 7,408 fish samples taken from the sea in Fukushima and found only eight samples that had excess amounts of radioactive contamination.

They were cherry salmon and white-spotted char.

However, these species were not among those imported for sale or consumption in Thailand, he said.

Click "play" to listen to Fukushima fish cause a big stink and "Download" to keep this file for educational purpose.

catch : the fish that fishermen catch in one day or journey -

consumer : someone who buys and uses goods and services - ผู้บริโภค

contamination : the process of making something dirty, polluted, or poisonous by adding a chemical, waste, or infection - การปนเปื้อน

diner (noun): someone who is eating a meal, especially at a restaurant - คนที่มารับประทานอาหารในร้านอาหาร

isotope (noun): one of two or more forms of a chemical element which have the same number of protons but a different number of neutrons in their atoms. They have different physical properties (= characteristics) but the same chemical ones - ไอโซโทป, ธาตุที่มีคุณสมบัติทางเคมีเหมือนกัน โดยมีจำนวนโปรตอนในนิวเคลียสเหมือนกันแต่จำนวนนิวตร

nuclear (adj): using, producing or resulting from nuclear energy - a powerful form of energy produced by converting matter into energy splitting the nuclei (= central parts) of atoms. It is used to produce electricity. -

radiation : powerful and very dangerous rays that are sent out from radioactive substances - รังสี, พลังงานจากรังสี

radioactive : sending out harmful radiation caused when the nuclei (= central parts) of atoms are broken up - เกี่ยวกับกัมมันตภาพรังสี

shipment : a load of goods that are sent from one place to another - ปริมาณสินค้าที่ขนส่งในครั้งหนึ่ง ๆ