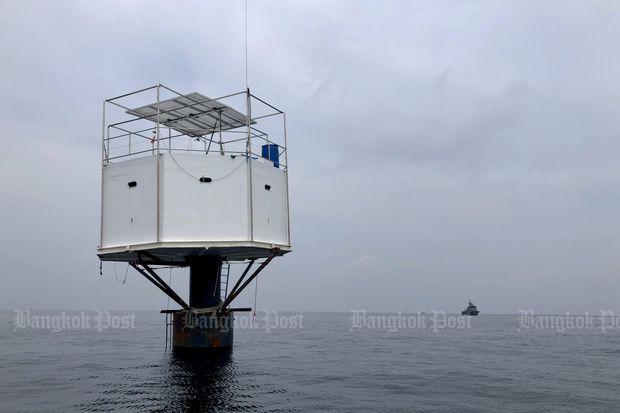 An April 13, 2019 photo provided by Royal Thai Navy shows a floating home lived in by an American man and his Thai partner in the Andaman Sea, off Phuket island. (Royal Thai Navy via AP)

Authorities have raided a floating home in the Andaman Sea belonging to an American man and his Thai partner who sought to be pioneers in the "seasteading" movement, which promotes living in international waters to be free of any nation's laws.

It filed a complaint against them with police in Phuket. Thai authorities said they have revoked Mr Elwartowski's visa.

Mr Elwartowski said in an email Thursday that he believes he and Supranee -- also known as Nadia Summergirl -- did nothing wrong.

"This is ridiculous,'' he said in an earlier statement posted online. "We lived on a floating house boat for a few weeks and now Thailand wants us killed.''

The couple, who have gone into hiding, had been living part-time on a small structure they said was anchored outside Thailand's territorial waters, just over 12 nautical miles from shore. They were not there when the navy carried out their raid on Saturday.

The Thai deputy naval commander responsible for the area said the project was a challenge to the country's authorities.

"This affects our national security and cannot be allowed,'' Rear Adm Wintharat Kotchaseni told Thai media on Tuesday. He said the floating house also posed a safety threat to navigation if it broke loose because the area is considered a shipping lane.

Seasteading has had a revival in recent years as libertarian ideas of living free from state interference -- such as by using crypto-currency including bitcoin -- have become more popular, including among influential Silicon Valley figures such as entrepreneur Peter Thiel. Mr Elwartowski, an IT specialist, has been involved in bitcoin since 2010.

Several larger-scale projects are under development, but some in the seasteading community have credited the Andaman Sea house with being the first modern implementation of seasteading.

"The first thing to do is whatever I can to help Chad & Nadia, because living on a weird self-built structure and dreaming of future sovereignty should be considered harmless eccentricities, not major crimes,'' Patri Friedman, a former Google engineer who heads The Seasteading Institute, said on his Facebook page.

The floating two-storey octagonal house at the centre of the controversy had been profiled and promoted online by a group called Ocean Builders, which touted it as a pilot project and sought to sell additional units.

The group describes itself as "a team of engineering focused entrepreneurs who have a passion for seasteading and are willing to put the hard work and effort forward to see that it happens".

In online statements, both Mr Elwartowski and Ocean Builders said the couple merely promoted and lived on the structure, and did not fund, design, build or set the location for it.

"I was volunteering for the project promoting it with the desire to be able to be the first seasteader and continue promoting it while living on the platform,'' Mr Elwartowski told The Associated Press.

"Being a foreigner in a foreign land, seeing the news that they want to give me the death penalty for just living on a floating house had me quite scared,'' Mr Elwartowski said. "We are still quite scared for our lives. We seriously did not think we were doing anything wrong and thought this would be a huge benefit for Thailand in so many ways.''

Asked his next step, he was more optimistic.

"I believe my lawyer can come to an amicable agreement with the Thai government,'' he said.

anchor (verb): to fix something firmly in position so that it cannot move - ยึดติด, ยึดติดอย่างมั่นคง

controversy : a disagreement that a lot of people have strong feelings about - ความขัดแย้ง

credit : to believe or say that somebody/something is responsible for doing something, especially something good - ให้เกียรติ, ยกย่อง, ให้เครดิต

eccentricity : something strange about a person's behaviour or habits -

endanger : to put in danger - ทำให้ตกอยู่ในอันตราย

filed a complaint : made an official statement that someone has done something wrong - ยื่นคำร้อง

implementation : the process of making something such as a plan, system, idea or law start to work and be used - การบังคับใช้ (กฎหมาย)

libertarian (noun): a person who strongly believes that people should have the freedom to do and think as they like - ผู้สนับสนุนหรือยึดถึงหลักแห่งเสรีภาพ

nautical mile : a unit of distance used at sea which is equal to 1852 metres -

pioneer : a person who is the first to study and develop a particular area of knowledge, culture, etc. that other people then continue to develop; one of the first people to go to a particular area in order to live and work there - นักบุกเบิก, ผู้บุกเบิก

raid (verb): to use force to suddenly enter a place - บุกเข้า

revival (noun): to bring back into use something that has not been used for a period of time - การนำมาทำใหม่, การทำให้มีพลังใหม่

sovereignty : the right of a country to rule itself - อำนาจอธิปไตย อำนาจเด็จขาดเหนือพื้นที่

territorial waters : the parts of a sea or an ocean which are near a country's coast and are legally under its control - เขตน่านน้ำของแต่ละประเทศ

tout : to try to persuade people that somebody/something is important or valuable by praising them/it - ชักชวน, ชักจูง