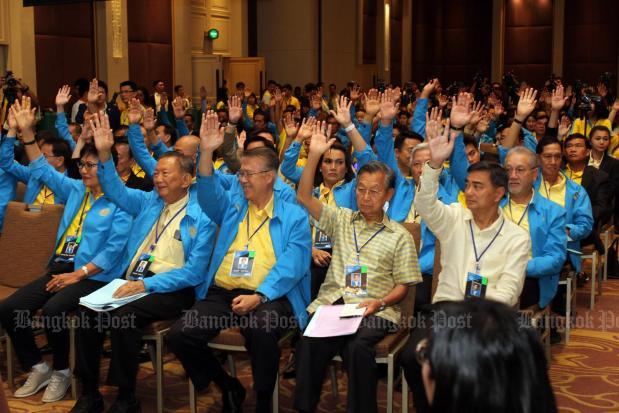 The pro-regime Palang Pracharath Party's (PPRP) chances of forming a coalition government have been thrown into doubt as concerns mount that the Democrat Party under its newly elected leader may switch sides and join an alliance led by the Pheu Thai Party.

The Democrats on Wednesday elected acting party leader Jurin Laksanavisit to be their new leader.

The first major decision for the party and its new board of executives is to decide whether to partner with the PPRP, which has nominated Prime Minister Prayut Chan-o-cha as its prime ministerial candidate, or work as an independent opposition.

However, several Democrat MPs want to join the PPRP-led alliance and set conditions to bargain for key cabinet seats to push for their election campaign pledges, a Democrat Party source said.

"We are weighing up which option is best for the party. We seem to be on the horns of a dilemma whether we join the PPRP-led alliance or the Pheu Thai-led bloc. But if we choose to be an independent opposition, we don't know if the people will agree with this," another source who sits on the newly elected executive board said.

Another source from the party said that following Mr Jurin's win, the PPRP has become jittery that the Democrat Party, which has been speculated to be the PPRP's potential ally, may ditch the PPRP-led alliance.

This is because Mr Jurin and his key supporters -- former leader Abhisit, Chuan Leekpai, who is the party's chief adviser, and Banyat Bantadtan, another former party leader, made it clear the Democrat Party should not back the PPRP's bid to set up a government led by Gen Prayut, he said.

Instead, they agreed the Democrat Party should join the Pheu Thai Party and the Future Forward Party (FFP) in forming another alliance to compete against the PPRP in the race to set up a new government.

The parties share a common aim of amending the current constitution, which is widely seen as a tool to help Gen Prayut prolong his grip on power.

Click "play" to listen to Democrats face major decision and "Download" to keep this file for educational purpose.

acting : doing the work of the usual person in a particular job while they are not there, or until a new person starts - ที่รักษาการแทน

alliance : a coalition; an arrangement to work together - พันธมิตร

ally : a person who helps and supports somebody who is in a difficult situation, especially a politician - คนหรือประเทศที่อยู่ในกลุ่มเดียวกัน, พันธมิตร

dilemma : a situation which makes problems, often one in which you have to make a very difficult choice between things of equal importance - สภาวะหนีเสือปะจรเข้,สภาวะที่กลืนไม่เข้าคายไม่ออก,สถานการณ์ที่ลำบาก

jittery : feeling nervous and upset, and sometimes being unable to keep still because of this - ที่กระวนกระวายใจ, ว้าวุ่นใจ, กังวลใจ

nominated : officially suggested for a job or position - แต่งตั้ง

opposition (noun): a team, group, etc. you are competing against - คู่ต่อสู้

prolong : to cause to continue for a long time - ยืดเวลาออกไป