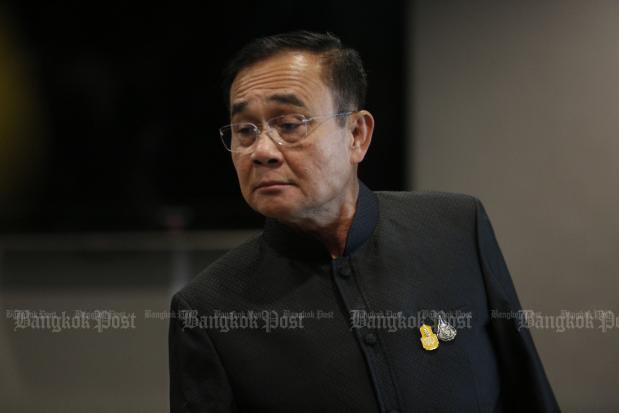 MPs and senators voted for Gen Prayut Chan-o-cha to be the prime minister in their joint meeting on Wednesday. (Photo by Pornprom Satrabhaya)

Prime Minister Prayut Chan-o-cha won parliamentary votes to reclaim the prime minister role on Wednesday night after he faced the first test of his political career when MPs from the Pheu Thai-led coalition questioned his qualifications, focusing on his role as a coup-maker.

Still, the Palang Pracharath Party (PPRP)-led coalition -- together with the junta-picked senators -- queued up to defend him, saying that this time, Gen Prayut was assuming power by democratic means, based on the 2017 constitution.

The combined members of the House of Representatives and Senate cast 500 votes for Gen Prayut, well ahead of Thanathorn Juangroongruangkit's 244.

House speaker Chuan Leekpai, who also serves as parliament president, allowed MPs and senators to discuss the qualifications of the prime ministerial candidates.

Mr Thanathorn did not take part in the debate and the prime ministerial vote, because he is suspended as an MP, pending a ruling by the Constitutional Court on his alleged illegal holding of shares in a media company.

Pheu Thai and FFP MPs zeroed in on Gen Prayut having led the May 2014 coup, saying that fact alone made him unfit to be prime minister.

FFP secretary-general Piyabutr Saengkanokkul criticised Gen Prayut's frequent use of Section 44 and numerous attempts to prolong his stay in power.

He reiterated his call for the 250 senators, handpicked by the regime, not to vote in the prime ministerial selection process.

PPRP MP Waipot Apornrat argued Gen Prayut was nominated for the post because the PPRP received a mandate from the people.

Outside the TOT auditorium, Mr Thanathorn held a press conference to outline his vision after a motion calling for the candidates to discuss their visions and plans for the country was dropped.

"Coups will only lead Thailand to a dead-end ... We must make parliament a place of honour, not a place where people's faith goes to die," Mr Thanathorn said.

Click "play" to listen to Prayut wins the PM vote and "Download" to keep this file for educational purpose.

candidate : a person who is trying to win an elected position - ผู้สมัคร

faith : trust in somebody's ability or knowledge; trust that somebody/something will do what has been promised - ศรัทธา

House of Representatives : the largest part of Congress in the US, or of the Parliament in Australia and Thailand - สภาผู้แทนราษฎร

mandate : an official order to do something - คำสั่ง

prolong : to cause to continue for a long time - ยืดเวลาออกไป

reiterate : to repeat something in order to emphasise it - พูดซ้ำ ย้ำ

Senate : one of the two groups of politicians who make laws in some countries, for example in the US, Australia, Canada and Thailand - วุฒิสภา

vision : the ability to imagine how a country, society, industry, etc. could develop in the future and to plan in a suitable way - วิสัยทัศน์