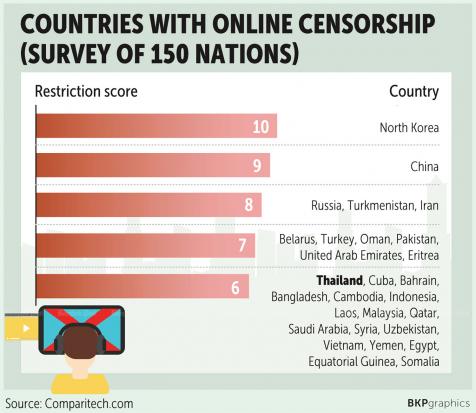 Thailand has received a score of 6 out of 10 for internet censorship, on par with various regional peers, according to UK-based tech research firm Comparitech.

A score of 6 was given to 17 countries, including Cambodia, Indonesia, Laos, Malaysia and Vietnam, out of 150 countries surveyed.

The higher the score, the greater the censorship. A score of 10 is the harshest internet censorship.

Singapore received a score of 5, while Myanmar and the Philippines were given a 4.

The score given to each country is based on five criteria, each worth two points. One point is earned if the content -- news media, social media, virtual private networks (VPNs), torrents, pornography  --- is restricted but accessible and two points if banned entirely.

"Censorship inhibits freedom of speech and public access to information," Mr Bischoff said. "Censorship silences voices that oppose authorities. This can lead to oppression or persecution of government critics, dissidents and activists. It gives authorities too much power to silence dissent."

The worst internet censorship score was given to North Korea -- the maximum score of 10.

According to the company's report, users in North Korea are unable to use social media, use torrents or VPNs, or watch pornography.

"All of the political media published in the country is created by the Korean Central News Agency [KCNA] -- the only source permitted to publish news," the report said.

Receiving a score of 9 was China, where Comparitech said Western social media, VPNs and pornography are blocked and political media is heavily restricted.

Journalists in China often face severe prison sentences if they publish anything against the government. Members of the public could risk being jailed for sharing or commenting on news posts, based on new online regulations.

Russia, Turkmenistan and Iran received a score of 8.

"These countries heavily censor political media but have different laws when it comes to all other areas," Comparitech said.

A score of 7 was given to Belarus, Turkey, Oman, Pakistan, the United Arab Emirates and Eritrea, all of which, according to the research firm, have similar approaches to internet censorship.

Political media is heavily censored and pornography is banned or blocked in all of these countries.

A total of 39 countries received a score of 1, including Switzerland, Canada, Ghana, Liberia, Peru and New Zealand.

Click "play" to listen to Thailand's internet censorship rates 6/10 and "Download" to keep this file for educational purpose.

ban : to officially say that someone is not allowed to do something   - ห้ามอย่างเป็นทางการ

block : to prevent from being seen - ปิดกั้น

censorship : removing the parts of a book, film/movie, internet content, etc. that are considered to be offensive, immoral or a political threat - การเซ็นเซอร์, การตรวจสอบสื่อต่างๆ เพื่อตัดส่วนที่ไม่เหมาะสมออก

criteria : a standard that is used for judging something or for making a decision about something - บรรทัดฐาน

dissent : strong disagreement, especially with those in power - ขัดแย้ง

dissident : someone who disagrees publicly with the policy of an organisation they belong to, especially a political party - ผู้คัดค้าน, ผู้ขัดแย้ง, ผู้ไม่เห็นด้วย

firm : a business or company - บริษัท

inhibit (verb): to prevent something from happening or make it happen more slowly or less frequently than normal - ยับยั้ง, ขัดขวาง, กั้นขวาง

oppression : bad, cruel and unfair treatment of someone by a person or government - การกดขี่, การปกครองที่บังคับกดขี่

peers : people who are the same age or have the same social position or the same abilities as other people in a group - เพื่อน

persecution : unfair or cruel treatment over a long period of time because of race, religion, or political beliefs - การกลั่นแกล้ง, การข่มเหง, การข่มเหงรังแก

torrent (noun): a large amount of water flowing rapidly and violently; a large of amount of something that is suddenly released - กระแสน้ำเชี่ยว,การไหลพุ่