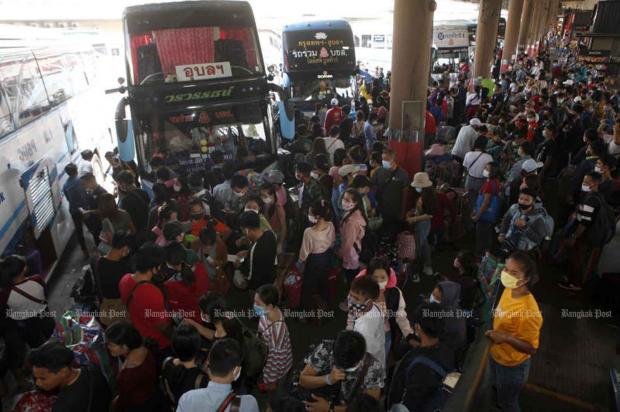 Travellers wait to board their buses at the crowded Mor Chit bus terminal in Bangkok on Sunday. The exodus is believed to be triggered by the closures of 26 business types in Bangkok and five other provinces for three weeks to tackle the spread of Covid-19. (Photo: Nutthawat Wicheanbut)

Almost 200 new infections were reported on Sunday, and a "soft Lockdown" prompted thousands of people to leave Bangkok.

After the announcement of a Bangkok "soft lockdown", thousands of people flocked to bus stations to leave the city and the country.

The number of Covid-19 cases rose to 599 with most of the new cases in Bangkok, said Public Health Ministry spokesman Thaveesilp Wisanuyothin. Dr Thaveesilp reported an increase of 188 new confirmed cases.

Responding to speculation of a full lockdown, Deputy Prime Minister Wissanu Krea-ngam said on Saturday the government had considered several measures to tackle the spread of the novel coronavirus.

He said whether these measures would be implemented depended on an evolving situation but noted that people "would be given a heads-up".

"Still, the government will have to consider people's safety as well as their convenience."

Following the closure orders by Bangkok and five other provinces, the national committee on communicable diseases stressed the need to screen passengers before boarding, to practise social distancing while away, and to clean and disinfect vehicles before and after the trips.

Speaking at the daily news briefing on Sunday, Dr Thaveesilp said, of the rise in Covid-19 cases in Thailand, two groups were identified.

The remaining cases were being investigated.

When asked if there would be additional measures to tackle the spread of the virus, Prime Minister Prayut Chan-o-cha said briefly: "We're working on it."

additional : more; more than was first mentioned or is usual - ที่เพิ่มขึ้น

adjacent : very near, next to, or touching - ติดกัน

communicable disease : a disease that can spread from one person or animal to another - โรคที่สามารถติดต่อได้

convenience : the quality of being suitable for your purposes and needs and causing the least difficulty - ความสะดวกสบาย

distance (noun): the amount of space between two places or things; being far away - ความห่างไกล

followed suit : did the same thing as someone else - ทำตาม