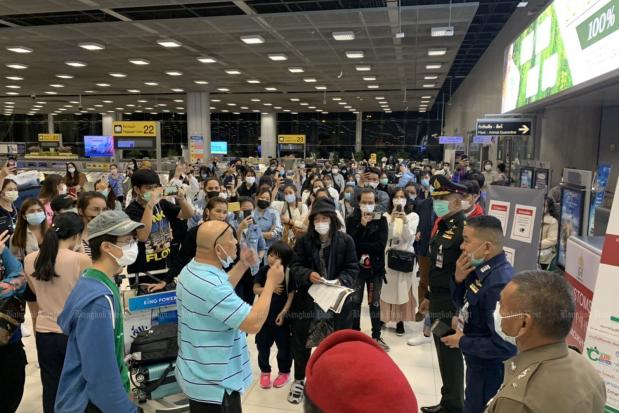 Prime Minister Prayut Chan-o-cha has ordered 152 Thais who landed at Suvarnabhumi on Friday night and refused to enter state quarantine to report themselves to authorities before 6pm on Saturday.

A total of 158 Thais — 103 from Japan, 11 from Qatar and 44 from Singapore — landed at the airport on Friday night, Dr Taweesin Visanuyothin, spokesman of the government's Centre for Covid-19 Situation Administration, said on Saturday.

But only six of them agreed to be sent to a place prepared by authorities, which is a hotel in Bangkok.

The remaining 152 refused, saying they had not been informed about it in advance, and went home.

After a meeting on Saturday, the Centre for Covid-19 Situation Administration said they must contact the Emergency Operation Centre at Suvarnabhumi or the authorities in their provinces.

Dr Taweesin stressed the government had their personal information and could track them down and warned about legal action.

He also urged people close to them to self-isolate for 14 days.

The group were Thais who could fly home because they had obtained all the necessary documents — fit-to-fly certificates issued within 72 hours before boarding and letters from embassies confirming they are Thai nationals seeking to return home — when they boarded planes on Friday.

Gen Prayut announced on Thursday evening all travel to the kingdom by both Thais and foreigners would be banned until April 15, effective immediately. After that period, he said all arrivals must be quarantined at state facilities.

As a result, when this group of Thais landed and were told they must be quarantined at state facilities, they protested, saying they had not been informed beforehand by Thai embassies that this was part of the requirements.

While recognising the importance of quarantine, they assumed they could do it at home. Some even claimed to have already booked hotel rooms for the purpose.

A passenger told The Standard online news outlet that after an argument with the group of returnees at the airport on Friday night, a major general allowed the group to go home and told them to strictly self-isolate for 14 days.

beforehand : earlier; before something else happens or is done - ล่วงหน้า,เสียก่อน

general (noun): an officer of very high rank in the army, the air force, the marines or the police - พลเอก, นายพล

protest : to make a strong complaint or disagreement - ประท้วง