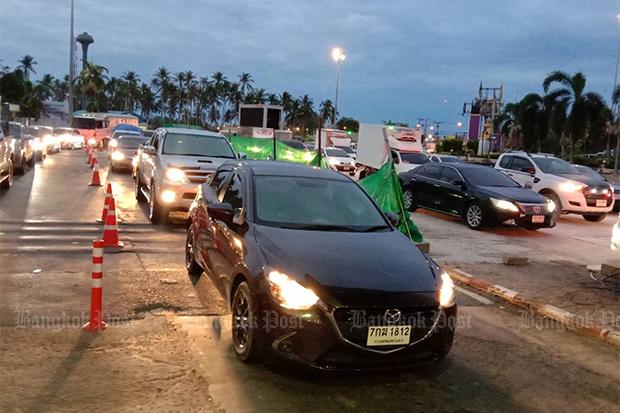 Motorists wait their turn to cross the bridge at Tha Chatchai and leave Phuket island for the southern mainland early on May 1, 2020. (Photo by Achadtaya Chuenniran)

The mass exodus of people leaving Phuket has renewed fears of an increase in Covid-19 infections after four new infections were found on the island on Sunday.

The coronavirus outbreak has forced the closure of all tourism-related businesses in Phuket, putting numerous people out of work. Those who wanted to return to their home provinces were until recently unable to do so due to restrictions imposed on travel.

However, Phuket remains under close watch because between 10,000-20,000 people have left since the nationwide lockdown was eased on May 3, Taweesilp Visanuyothin, spokesman of the Centre for Covid-19 Situation Administration (CCSA), said on Sunday.

Phuket has the second-highest number of confirmed cases in the country, after Bangkok. Four new Covid-19 cases were also reported on Sunday.

The four new cases take the island's total to 224. Of the 224 confirmed cases there, 191 patients have been discharged from hospital, three people died while 29 others are still receiving treatment.

The Interior Ministry has instructed all provincial governors and the Bangkok governor to place returnees from Phuket under quarantine.

A health minister said that more than 30,000 people registered for fit-to-travel certificates, which they needed to make the inter-provincial journey to their homes.

The CCSA spokesman said that despite his statement to the contrary during Saturday's briefing, a shopping mall will not in fact reopen for a two-day trial on Thursday and Friday.

Only the centre's full board has the authority to make that decision, he said, and the issue will be decided on Friday.

On Saturday, Dr Taweesilp said a mall will reopen for a two-day trial run to assess the effectiveness of safe distancing rules, in preparation for some shopping centres' return to business next Sunday.

In Sunday's briefing, he stressed that the types of places which will be allowed to reopen, as well as the dates they can do so, will be determined on Friday, before adding that health and safety would be prioritised over economic concerns.

Click "play" to listen to More Phuket virus fears; no Bangkok mall trial and "Download" to keep this file for educational purpose.

board : a group of people who have the responsibility of managing important business or government activities - คณะกรรมการ

contrary : completely different or opposed to something else - ตรงข้าม

ease : to make a problem, situation or pain less severe or serious - บรรเทา

effectiveness : the ability to produce the result that is intended - ประสิทธิผล

preparation : things that you do to get ready for something or make something ready - การตระเตรียม

restriction : a rule, action or situation that limits or controls someone or something - การจำกัด, การควบคุม