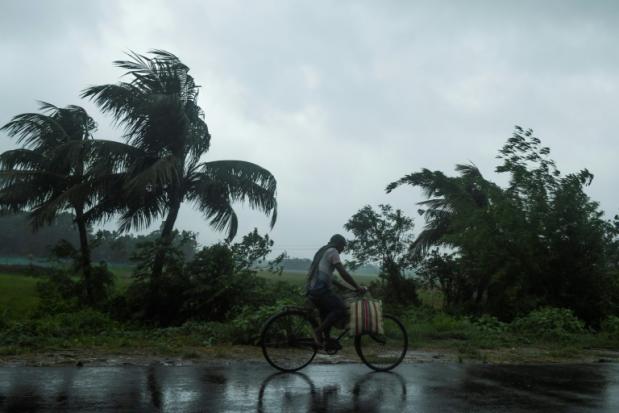 Authorities have scrambled to evacuate people away from the path of Amphan.

KHULN, Bangladesh: Several million people sheltered and prayed on Wednesday as one of the fiercest cyclones in moved roared towards Bangladesh and eastern India, with forecasts of a deadly storm surge.

A few hours ahead of the predicted arrival of Amphan, the Bangladeshi Red Crescent reported the first death, after one its volunteers drowned when strong winds capsized a boat.

Authorities have evacuated low lying areas in the storm's projected trail of destruction, but their task is complicated by the need to follow precautions to prevent the spread of coronavirus.

Amphan is only the second "super cyclone" to form over the Bay of Bengal since records began, and the first since 1999.

At midday (1.30pm in Thailand) the vast vortex -- visible from space -- was 125 kilometres offshore and forecast to hit the coast in the afternoon or evening.

Gusts of 185 kilometres per hour were predicted when it does with a storm surge of several metres, forecasters said.

Such walls of water can travel several kilometres inland, and are often the main killers in any cyclone, typhoon or hurricane.

The Indian met office warned of possible flying objects, "extensive" damage to communications and power lines, and trees being ripped out of the ground by the wind.

Kolkata was battered by heavy rain and the Hooghly river was rising, while in the coastal resort of Digha, large waves were pounding the shore.

capsize : (of a boat or other object) to turn over in the water - คว่ำ, พลิกคว่ำ

cyclone : a violent tropical storm in which strong winds move in a circle - พายุหมุนไซโคลน

gust : a sudden strong increase in the amount and speed of wind that is blowing - ลมพัดแรงทันที

pound : to hit something/somebody hard many times, especially in a way that makes a lot of noise - ตีกระหน่ำ, โจมตีต่อเนื่อง

predict : to say that an event or action will happen in the future, especially as a result of knowledge or experience - คาดการณ์ว่า พยากรณ์จากสถิติว่า

shore : the land along the edge of the sea or ocean, a lake or another large area of water - ชายฝั่ง

storm surge : a sudden increase in the height of waves in the sea during a storm - น้ำทะเลหนุน

vortex (noun): a mass of air, water, etc. that spins around very fast and pulls things into its centre - กระแสลมหรือกระแสน้ำที่หมุนวน