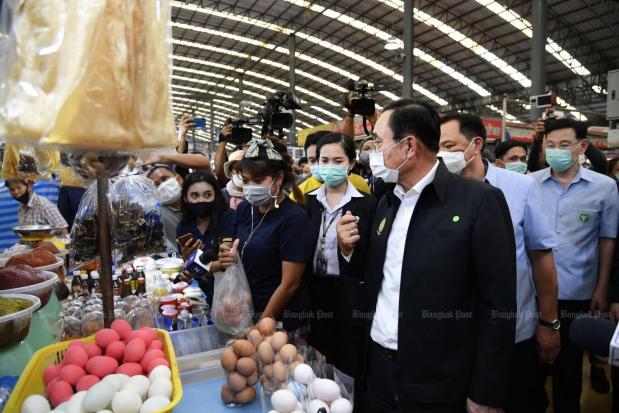 Prime Minister Prayut Chan-o-cha told residents in Rayong to resume their normal lives while the Health Ministry confirmed no local transmissions in the province after an infected Egyptian soldier stayed there without being quarantined.

The premier on Wednesday travelled to Rayong from Bangkok by helicopter.

The prime minister apologised to the people of Rayong and promised them this kind of event "would not happen again", referring to the infected soldier who was not in quarantine while staying in the province.

He called on people to remain confident in the public health system and doctors, asserting there would be no more VIPs going astray and that everyone must be tested for the virus.

Prayut said he would take responsibility for the incident and urged everyone to treat the Rayong event as a lesson. The premier called on the media to avoid running news reports that stir up nationwide panic and suggested they focus on reporting the fact that there have been no new local transmissions in the country.

Meanwhile, business people and members of the general public in Rayong on Wednesday went to Government House to submit a petition to the prime minister, asking for the cancellation of 14-day quarantine exemptions for foreign visitors.

"The people of Rayong have lived without much income for the past four to five months but we accepted the situation and complied with every measure," one businesswoman said.

"We do not want an apology. We want the government to respond to what happened and treat everyone equally."

Click "play" to listen to PM urges return to 'normality' after scare and "Download" to keep this file for educational purpose.

astray (adv): to go in the wrong direction or to have the wrong result - หลงทาง

confident : certain; having trust in people, plans, or the future - มั่นใจ

entourage : a group of people who travel with an important person - คณะผู้ติดตามของบุคคลสำคัญ

exemption : permission to not have to do something, such as making a payment, following a rule, etc. - ข้อยกเว้น

panic : a sudden strong feeling of fear or worry that causes you to be unable to think clearly or calmly - ความตื่นตกใจ

petition : a request of someone in authority to do something - คำร้อง

responsibility : deserving to be blamed for something that has happened - ความรับผิดชอบ

treat : to behave in a particular way towards somebody/something - ปฏิบัติ(ต่อ)