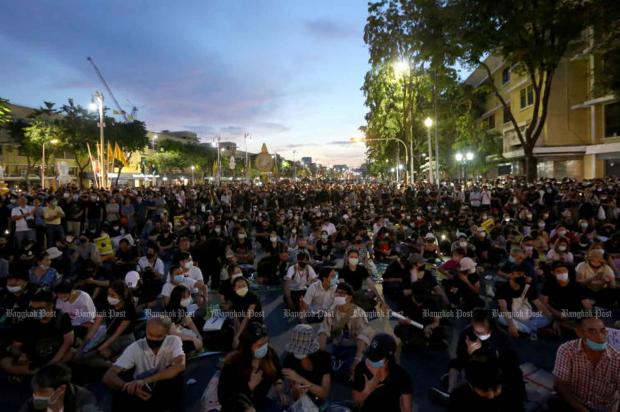 Confrontation between anti-government protesters and royalists is feared as both sides plan rallies outside parliament this morning.

The anti-government movement is led by the Free People and the Student Union of Thailand, while the royalist movement is headed by the Archeewa Chuay Chart (Vocational Students Helping the Nation) group and another group calling itself the Association of Students of Thailand.

The two sides have both announced their plans to rally outside parliament at 10am today.

The anti-government side is demanding the government stop threatening people who come out to exercise their democratic rights and freedom.

The group has criticised injustice and disparities in society, urged a rewrite of the constitution and House dissolution.

The other side, meanwhile, accuses the first side of having a hidden agenda, which targets the high institution, and warning anti-government protesters to stick to their claimed goal of finding a way out of the country's "political crisis".

The anti-government side has asked its supporters to rally outside parliament the morning before they gather again at Thammasat University's Rangsit campus at 5pm when thousands of people, mostly university students, are expected.

Human rights lawyer Arnon Nampa, who was released on bail in a sedition case brought against him in connection with a July 18 anti-government gathering at the Democracy Monument, has vowed the Aug 16 rally will be at full steam no matter what will happen.

He was arrested on Friday along with Panupong Chadnok, known as "Mike Rayong", one of the young people who held posters denouncing Gen Prayut when the prime minister visited his hometown of Rayong.

Mr Arnon, who has represented several pro-democracy activists in the past, earlier created a stir when he gave a speech at a rally near the Democracy Monument on Aug 3.

In the speech, he mentioned the relationship between the monarchy and the constitution.

While anti-government rallies took place in Chiang Mai, Nakhon Ratchasima and Maha Sarakham on Sunday, the Student Union of Thailand posted on Facebook that three protest leaders in Phitsanulok had been missing since Sunday at noon.

They were believed to have been in border patrol police custody in the province to prevent Sunday's rally from succeeding.

Click "play" to listen to Rally rivals set to face off and "Download" to keep this file for educational purpose.

denounce : to criticise someone or something severely in public - ประณาม, ติเตียน

full steam (idiom): with as much speed or energy as possible - เร่งให้รุดหน้าอย่างมากที่สุด

high institution (noun): (noun) the monarchy; the king or queen of a country and their family - ราชวงศ์, พระบรมวงศานุวงศ์

House (of Representatives) : the largest part of Congress in the US, or of the Parliament in Australia and Thailand - สภาผู้แทนราษฎร

House dissolution (noun): the ending of the current term of the House of Representations, followed by a new election - การยุบสภา

human rights : the basic rights which it is generally considered all people should have, such as justice and the freedom to say what you think - สิทธิมนุษยชน

rally : to join a public meeting that a lot of people go to in order to support someone or protest against someone or something - ชุมนุม

right : something that you are morally or legally allowed to do or have - สิทธิ

royalist (adj): giving support to the royal family of a country -

stir (noun): a lot of interest or excitement or anger - ความตื่นเต้น, การปลุกเร้า