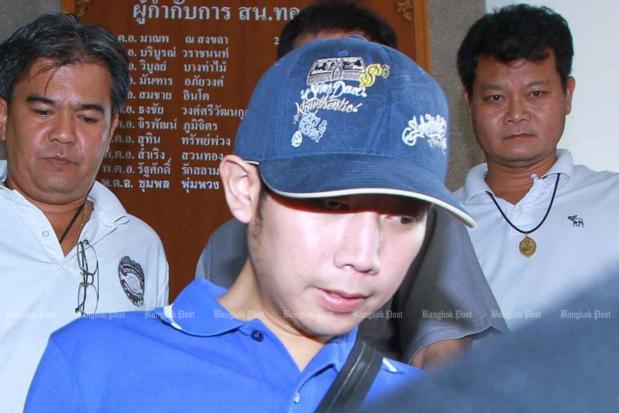 Vorayuth Yoovidhya is with police after his hit-and-run crash in Bangkok on Sept 3, 2012. (Photo: Somchai Poomlard)

Deputy Attorney-General Nate Naksuk, who approved the dropping of the reckless driving charge against Red Bull scion Vorayuth "Boss" Yoovidhya, was a no-show on Sunday at a hearing of a sub-panel examining the prosecutor's handling of the case.

The sub-panel -- which is headed by Borwornsak Uwanno, former chairman of a constitution drafting group, and under the independent inquiry committee set up by the prime minister to look into the case -- summonsed Mr Nate to give statements, but he failed to show up.

To date, there have been three committees formed to look into the dropping of the reckless driving charge against Mr Vorayuth, after the decision sparked a public outcry.

One was set up by Prime Minister Prayut Chan-o-cha and the other two were launched by the Office of the Attorney-General (OAG) and the Royal Thai Police Office to look into their roles in the case.

Only deputy spokesman of the OAG Prayuth Phetkhun and a group of prosecutors involved in the case attended Sunday's hearing, which lasted about five hours. Mr Prayuth appeared before the Borwornsak panel in his capacity as a member of the prosecutors' panel looking into the case.

Mr Borwornsak said on Sunday the panel would make sure Mr Nate shows up to clarify the issue. "He will have to appear before the panel eventually," he said.

While declining to discuss Mr Nate's judgement, Mr Borwornsak said the hit-and-run case exposed what were deemed as weaknesses in the OAG's justice administration process.

Click "play" to listen to Man who dropped 'Boss' charge a no-show at hearing and "Download" to keep this file for educational purpose.

deputy : a person who is given the power to do something instead of another person, or the person whose rank is immediately below that of the leader of an organisation - รอง, ตัวแทน,ผู้รักษาการแทน

draft : to write a document, plan, etc. that may be changed before it is finally accepted - ร่าง

hearing (n): an official meeting at which the facts about a crime, complaint, etc. are presented to the person or group of people who will have to decide what action to take -

inquiry : an official examination of a problem, crime,  accident, etc. in order to get information or the truth - การไต่สวนหาข้อเท็จจริง การไต่สวน

no-show (noun): not coming to an event or appointment - การไม่ปรากฏตัว

recklessness : doing something dangerous and not worrying about the risks and the possible results - ความชะล่าใจ,ความเสี่ยง,ความไม่ยั้งคิด