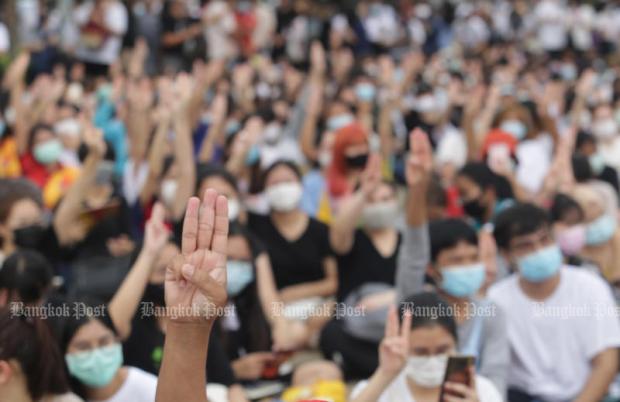 The anti-government rally at Thammasat University on Monday night is thought to have risked offending the monarchy, sparking fears that it could trigger violent confrontations between the royalist movement and its opponents.

Comments made by protesters at the university's Rangsit Campus in Pathum Thani have potentially violated Section 112 of the Criminal Code, also known as the lese majeste law. Students announced a set of 10 demands which included changes in the country's highest institution, including Section 112 and royal prerogatives.

Prime Minister Prayut Chan-o-cha on Tuesday said that the government had been closely monitoring the situation and admitted he was worried about it. However, he refused to comment on the protesters' demands.

Meanwhile, Thammasat University on Tuesday issued a statement distancing itself from the rally and apologised for the rally that took place on its campus.

The university said that the organisers had asked for permission to hold the rally to push for their three original demands: constitutional amendments, the dissolution of the House and an end to the intimidation of critics of the government.

However, the university said that during the rally the protesters had acted and spoken beyond permitted bounds, particularly on issues which were delicate and sensitive to the feelings of the public at large.

Police will take legal action against all involved, particularly those who are not Thammasat University students. The university says it is willing to cooperate and ensure justice for all sides.

The university has also banned political activities that risk violating the law.

Senator Kamnoon Sidhisamarn told parliament that the demands made by protesters during the rally were unprecedented and their comments were the most violent he'd ever heard.

On Oct 6, 1976, soldiers, police and members of far-right groups surrounded the Thammasat University campus in Tha Prachan and killed scores of student activists who had gathered to oppose the return of Field Marshal Thanom Kittikachorn, who was overthrown and fled the country after the October 1973 uprising.

Click "play" to listen to Students 'crossed the line' and "Download" to keep this file for educational purpose.

dissolution of the lower house : formally end the House of Representatives, usually leading to a general election - การยุบสภา

distance : to act in a way that shows that you are not connected with someone or something - เขยิบออก

high institution (noun): (noun) the monarchy; the king or queen of a country and their family - ราชวงศ์, พระบรมวงศานุวงศ์

intimidation : deliberately making someone feel frightened, especially so that they will do what you want - ขู่ขวัญ

prerogative : a right that a particular person or group has - สิทธิพิเศษ, อภิสิทธิ์

sensitive : easily upset by the things people say or do - รับความรู้สึกได้ง่าย

uprising : a political situation in which a large group of people opposes and tries to defeat the government or a ruler - การลุกฮือขึ้นก่อการปฏิวัติ