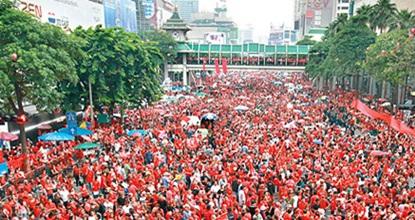 Red shirt rallies in Bangkok and up-country to mark the fourth anniversary of the Sept 19, 2006 coup yesterday were large and peaceful.

Red shirt rallies in Bangkok and up-country to mark the fourth anniversary of the Sept 19, 2006 coup yesterday were large and peaceful. 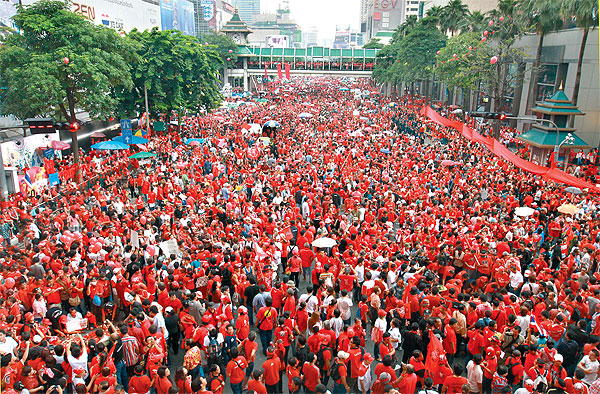 Large numbers of red shirt supporters led by the United Front for Democracy against Dictatorship turn up for a mass gathering at Ratchaprasong intersection to mark the fourth anniversary of the Sept 19, 2006 coup yesterday. It was their first major rally since they dispersed from the area on May 19. THITI WANNAMONTHA

No violence amid sea of red 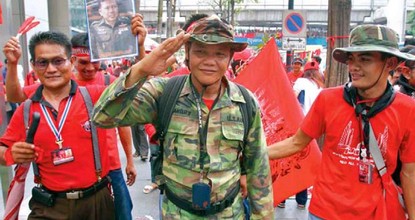 Red shirt rallies in Bangkok and up-country were large and without incident and even featured a Seh Daeng lookalike. PRAKIT CHANTAWONG

Mass red shirt gatherings in key cities throughout the country have gone off without major incidents. The biggest turnout yesterday was reported at Bangkok's Ratchaprasong intersection, the former focal point of the group during protests in April and May.

Despite the day being free of incidents, the return of about 10,000 red shirts to Ratchaprasong has alarmed authorities that the anti-government movement could be regaining power.

The red shirts timed the gathering, the group's strongest show of force since troops moved in to disperse their rally at Ratchaprasong on May 19, to coincide with the fourth anniversary of the Sept 19, 2006 coup that led to the ouster of Thaksin Shinawatra, seen as the UDD's main supporter.

The UDD organisers said the gathering was meant to commemorate the 91 people, mostly red shirt protesters and security forces, who died in clashes between authorities and the anti-government group during the protests.

Security authorities were on the alert for civil unrest or sabotage by third parties, but the gatherings were mostly peaceful.

Most activities yesterday followed a set pattern. Key UDD figures addressed the crowds, as members tied red banners at the venues. They then laid wreaths outside army installations before dispersing in the early evening.

Sombat Boonngam-anong, leader of the Red Sunday Group which arranged the Ratchaprasong gathering, said it was called off an hour early at 6.30pm because so many people had come and it was difficult to manage them without loudspeakers, which are banned under the emergency decree.

He said he was pleased with the turnout which brought traffic at Ratchaprasong intersection to a halt yesterday.

''The roads were closed due to so many red shirts being there. The turnout was greater than I expected,'' he said.

UDD supporters released red balloons over the intersection, lit candles and laid roses at the adjacent Pathum Wanaram temple where some of the group's members were shot dead on May 19 by unidentified gunmen.

In Chiang Mai, UDD supporters rallied at the Municipal Sports Stadium as 400 policemen stood by.

Red shirt supporters from northern provinces arrived at the stadium in the afternoon. Some also arrived by car from Bangkok.

An exhibition featuring information about the protest was set up and a play was staged mocking the military's containment of the the Ratchaprasong protest.

People from seven northeastern provinces in pink shirts gathered as part of a group they said was intended to protect the monarchy.

Mongkol Surasajja, chief of the provincial administration department, told the crowds on the grounds of Thung Sri Muang that their duty was to help forge national unity and honour the monarchy.

You can read the complete story here: http://bit.ly/crSlMj

United Front for Democracy Against Dictatorship (UDD) – the group originally formed to demonstrate against the 2006 coup and which supported the previous governments against the PAD and which is now leading the fight against the current government. They are known for wearing red shirts แนวร่วมประชาธิปไตยต่อต้านเผด็จการแห่งชาต
mass gathering – mass rally; a very large public coming together of people to support someone or to protest against something การชุมนุมใหญ่
intersection – a place where roads, lines, etc., join or cross each other สี่แยก
mark – to show respect for or to remember ระลึกถึง
anniversary – a date when you celebrate something that happened in a previous year that is important to you วันครบรอบ
disperse – (of a crowd) to cause to separate and move in different directions, i.e., to end being a crowd สลาย (การชุมนุม)
violence – physical force with the deliberate intention of causing damage to property or injury or death to people ความรุนแรง
amid – at the same time as ท่ามกลาง
stage – to organise an event or activity จัด
incident – something that happens, usually something bad เหตุการณ์
turnout – the number of people who come to an event or take part in an activity  ผู้ที่เข้าร่วม
focal point – the most important, interesting, or attractive part of something, that you concentrate on or pay particular attention to จุดโฟกัส, จุดสนใจ
alarm – to cause worry or fear that something unpleasant or dangerous might happen or is happening ทำให้กังวล
authorities – the police or people in official organisations who have the legal power to make people obey laws or rules เจ้าหน้าที่ (ตำรวจ หรือผู้มีอำนาจ)
regain – to get back something that was lost or taken away ได้กลับมา
converge – to come from different directions to reach the same point ไปยังจุดหมายเดียวกัน
stronghold – an area where there is a lot of support for a political party, a government or other group  ฐานเสียง, ฐานที่มั่น, ขุมกำลัง
troops – soldiers, especially in large numbers กองทหาร
coincide with – to happen at the same time as something else  เกิดขึ้นพร้อมกับ
ouster – forcing someone out of a position of power  ขับออกจากอำนาจ
commemorate - to remember someone or something officially การระลึกถึง
clash – a fight or battle between two groups of people การต่อสู้ด้วยกำลัง
on alert – ready to deal with a dangerous situation เตรียมพร้อม อย่างเต็มที่
civil unrest – angry or violent behaviour by people who are protesting or fighting against something สถานการณ์ที่ไม่สงบ
sabotage – deliberate damage that is done to an enemy or opponent การบ่อนทำลาย
set pattern – carrying out an activity in the same way each  time
key – most important  ที่สำคัญ
figure – someone who is important in some way บุคคลสำคัญ
address – to speak publicly to a group of people  กล่าวปราศรัย
banner – a wide piece of cloth or paper with a message on it  แถบผ้า ป้าย
venue – the place where an activity or event happens  สถานที่ที่จัดงาน
wreath – a circle of flowers or leaves that you put on a grave to show that you are remembering the dead person พวงหรีด
army installation – a building or structure, especially one that is important for an army, industry, or government ค่ายทหาร, ที่ทำการกองบัญชาการ
call off – to decide to stop something that is already happening; to decide that something will not happen – บอกเลิก
loudspeaker – a piece of electrical equipment that allows sounds or voices to be heard loudly at a distance เครื่องกระจายเสียง, ลำโพง
banned – officially not allowed ถูกห้าม
emergency decree – a situation where the government takes on special powers in a dangerous situation and the rights of the people are often limited in some way ประกาศภาวะฉุกเฉิน
halt –stop หยุดนิ่ง
release – to let something move freely ปล่อย
adjacent - very near, next to, or touching ติดกัน
unidentified – not known (who someone is) ซึ่งไม่สามารถระบุได้
exhibition – a public show where art or other interesting things are put so that people can go and look at them นิทรรศการ
mock – to  laugh at someone or something or make fun of them in an unkind way หัวเราะเยาะ, เย้ยหยัน
containment – the process of controlling a situation or substance that could become harmful or dangerous การควบคุมไว้
meanwhile – at the same time ในเวลาเดียวกัน
rival – of a person, group, team or business that competes with another ที่เป็นคู่แข่งกัน
forge – to work hard to achieve something สร้างอย่างมานะพยายาม
unity – a situation in which people, groups, or countries join together or agree about something ความเป็นเอกภาพ, ความเป็นอันหนึ่งอันเดียวกัน
the monarchy – the king or queen and their family in a particular country สถาบันกษัตริย์