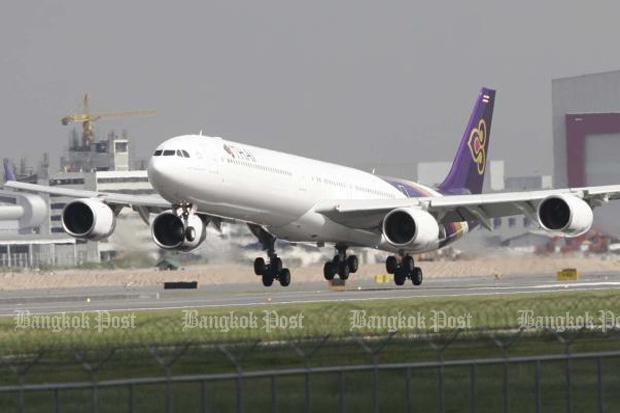 A Thai Airways Airbus A340-600 touches down in a landing test in Bangkok in 2005. (Photo by Somchai Poomlard)

Some employees of Thai Airways International (THAI) became unusually rich from a major plane procurement deal struck in 2003-2004, according to a police-led investigation team set up by the Transport Ministry.

Mr Thaworn said he was assigned by Transport Minister Saksayam Chidchob to announce the results of the investigation to parliament on Wednesday.

He said the focus of the investigation was on the factors that played a major part in landing the struggling airline deep in the red. THAI has run up debts exceeding 244 billion baht.

Mr Thaworn said the probe team discovered that between 2003 and 2004, THAI had purchased 10 Airbus A340 aircraft. The planes were to be used on direct flights linking Bangkok with New York and Los Angeles.

Two years after the Bangkok-US services were launched, the airline recorded losses of 12 billion baht. The losses widened to 39 billion baht after the same aircraft were flown on other routes.

The direct flights to the US went ahead despite the Office of the National Economic and Social Development Council objecting to THAI buying those type of planes. The agency questioned the feasibility of operating the planes profitably.

Mr Thaworn said the Charnthep team's findings will be forwarded to the National Anti-Corruption Commission and he would give further details of the probe later this month.

"Corruption had definitely occurred," he said.

conclusion : something that you decide is true after consider all the evidence and thinking about it carefully - การสรุป,บทสรุป

ill-gotten (adj): of money or property that someone obtained in an illegal or dishonest way - โดยทุจริต, โดยมิชอบด้วยกฎหมาย

loss (noun): money that has been lost by a business or an organisation - การขาดทุน

object : to disagree with - คัดค้าน

procurement : the process of buying supplies or equipment for a government department or company - การจัดซื้อวัสดุ เครื่องมือสำหรับบริษัท หรือหน่วยงานของรัฐ