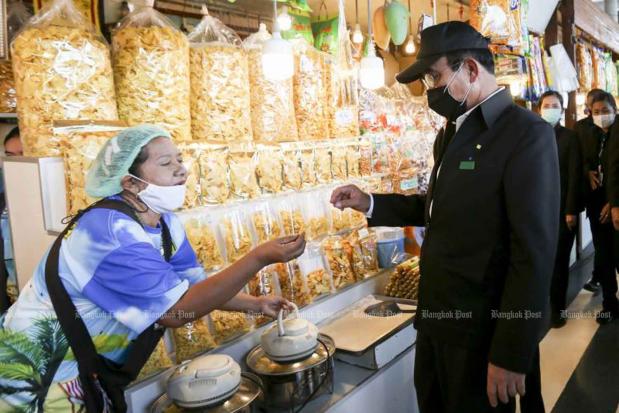 Prime Minister Prayut Chan-o-cha tries durian chips during his visit to Rayong province on Tuesday. He said the country needed to welcome back foreign tourists, for the survival of its economy. (Photo by Pattarapong Chatpattarasill)

Thailand needs to attract foreign tourists and have a welcoming system of disease control in place, Prime Minister Prayut Chan-o-cha said on Wednesday.

The return of foreign visitors would begin with only a limited number of arrivals, to test the country's disease control measures, which would be comprehensive, he said.

He sought to allay concerns that tourists could bring with them a new wave of coronavirus disease.

"There will be forms to fill in. Flights must be traceable. When they reach their destinations their whereabouts will have to be confirmed and they will be isolated from others," the prime minister said.

Prayut said the return of tourists was essential for the country. "If nothing is done, things will get worse. Premises will be shut down. Employees will be laid off. How can the government afford to help them all?" he said.

He gave an assurance that visitors would be monitored, and said he hoped local people would welcome them back.

"Local people will have to take care [of the visitors] because the benefits will go to them, not the government," Prayut said. "Please rest assured that if [the disease] is detected, we will be able to contain it," he said.

Areas in need of urgent relief will be prioritised, he said. He mentioned, for instance, the resort island of Phuket where local opinion is split over a proposal to let in foreign tourists. He said small groups of tourists will be allowed to come in under a sandbox concept (pilot project).

Hotel operators in Phuket are trying to allay local concerns by insisting on strict rules for villa quarantines while not allowing foreign tourists to travel freely.

At present there are just two alternative state quarantine (ASQ) hotels in the province, but 56 more have applied and are awaiting inspection and approval. But some rules in Phuket's villa quarantine scheme have been relaxed, such as allowing guests who tested negative during the first five days to sunbathe on the hotel beach under social distancing rules.

Click "play" to listen to Prayut backs return of tourists and "Download" to keep this file for educational purpose.

benefit : an advantage you get from a situation; a helpful or good effect, or something intended to help - ผลประโยชน์, ข้อได้เปรียบ, ผลดี

comprehensive : complete and including everything that is necessary - ที่ครอบคลุม

laid off : when someone to lose their job, usually because there is not enough work for them to do - การปลดคนงาน

limited : intended only for certain people who have been given special permission/qualification - จำกัด

pilot project : a plan, product or system that is used to test how good something is before introducing it - โครงการ นำร่อง

trace : to follow the evidence to find out something - ตามรอย ตามทาง