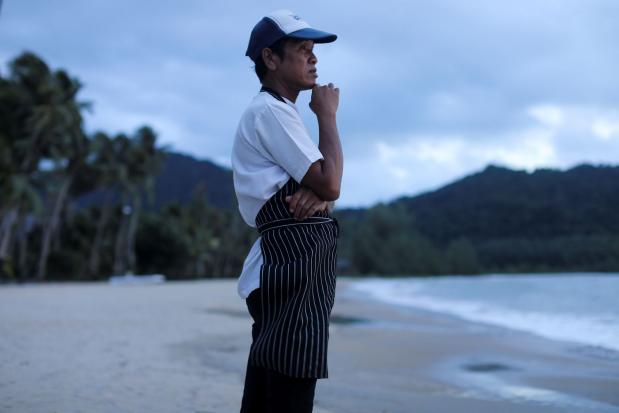 A chef stands on an empty beach as he waits for customers on Koh Chang in Trat on July 31. (Reuters photo)

Authorities are finalising a plan that would make it possible for retired, sun-seeking foreigners to spend the coming winter months in Thailand in an effort to save the ailing tourism industry, says a prominent hospital executive.

Although the country’s borders have been closed to most foreigners since late March to fight the pandemic, the government is proposing to grant visas to foreigners who want to stay in Thailand for up to nine months, said Boon Vanasin, chairman of Thonburi Healthcare Group Plc, the country’s third largest private hospital firm, which runs hospitals and retirement homes.

These long-term visitors would begin their stay with a mandatory 14-day quarantine and frequent virus tests in of Phuket. After three weeks on the island and negative test results, they would be free to travel to other regions of the country, according to Dr Boon, who said he has direct knowledge of the government’s plan and expects the arrivals to begin before winter.

Tourism and Sports Minister Phiphat Ratchakitprakarn reiterated on Saturday that he supported the idea of a long-stay tourist visa for selected groups.

Speaking at a news conference during a tour arranged for several ambassadors in Samut Prakan, Mr Phiphat said the initial visa would be for 90 days and could be extended twice more for a total of 270 days.


Traisulee Traisoranakul, deputy spokeswoman in the Prime Minister’s Office, said earlier that while the government had approved the plan in principle, it is still finalising measures to reduce the risk of virus infections.

The opening-up would offer a lifeline to the devastated tourism and hospitality industry, which is struggling to survive after five months without foreign visitors. Although Thailand has been one of the world’s most successful countries in curbing Covid-19 — it has not had a locally transmitted case for more than three months — the tourism-reliant economy has been one of the worst-hit globally, projected to shrink by a record 8.5% this year.

The country reported one imported coronavirus infection on Saturday, and none on Sunday.

ambassador : someone who is considered to represent an activity, organization, company etc - ตัวแทน, ผู้แทน

in principle : in general terms without knowing the details or whether something is really possible - โดยหลัก

lifeline : something that is very important for somebody and that they depend on - วิถีทางจรรโลงชีวิต

reiterated : repeated something in order to emphasise it or make it very clear to people - ยืนยันตามเดิม