Spreading Theravadan Buddhism to rest of the world

A conference to be held in Bangkok will ponder the question of how to take a more proactive stance to spreading the word of the Lord Buddha to other countries.

Many people from the US and Europe make their way to Thailand and Burma every year by themselves to learn about Buddhism.

Many of them spend a month or so in a many meditation centers learning Vipassana meditation.

The Theravadan Buddhism practiced in Thailand, Burma, Cambodia, Laos and Sri Lanka does little to evangelize or spread the religion.

This might change soon if the ideas discussed in a conference soon to be held in Bangkok take root.

That is the subject of today's article. For the full version of the article with all the conference information see here. 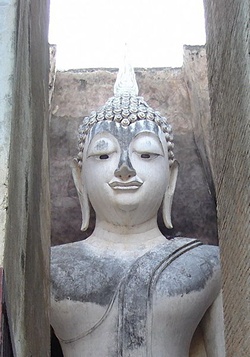 ...it is noticeable that the influence of Theravada Buddhism, which on the global scale seemed for a while to predominate over that of other forms of Buddhism, has recently been somewhat eclipsed by the resurgence and popularisation of Mahayana and Vajrayana Buddhism.

This has made scholars question the methods by which Theravada is being disseminated, and seek reasons for its comparative lack of success.


When they arrive abroad, Theravada missionaries from Sri Lanka, Burma and Thailand set up temples and monasteries which become cultural centres and provide religious services for the diaspora populations from their own countries, rather than aiming their efforts at the local populations of the host countries. The modern world has been described as a "world without frontiers", but how true is this.

Prof Dr Richard Gombrich, whose academic excellence is in Sanskrit and Pali, will deliver a keynote speech on "The Dissemination of Theravada Buddhism in the 21st Century.

He has authored hundreds of academic articles on Buddhism and many books which became the references of Theravada Buddhist Studies. These include Theravada Buddhism: A Social History From Ancient Benares to Modern Colombo and the latest, What the Buddha Thought.


Dr Keshab Shakya is a renowned developer of Nepal with many international development projects to his credit. He is a former vice chairman of Lumbini Development Trust who was responsible for Lumbini, the Buddha's birthplace under the government of Nepal. Recently, he is the president of a political party for indigenous rights in Nepal. He will present his paper on "Renaissance of Theravada Buddhism in Nepal.


Ven Prof Dr Dhammapiya is a Mahasi Vipassana meditation master who has been teaching and conducting meditation in Malaysia and the USA. He is delivering a paper on "The Role of Mahasi Vipassana Meditation Tradition in Dissemination of Buddhism in the World After World War II.

Dr Titus Leber has produced a world-class interactive media under the title of "What Did the Buddha Teach?" Currently, he is working on another big multimedia project entitled "Borobudur: Paths to Enlightenment". At the conference, he will show the power of multimedia with his "Role of Multimedia in Dissemination of Buddhism" presentation.


Rev Dr Gregory Sharkey SJ's specialty is Buddhist-Christian interreligious dialogue and he is going to speak on the important topic of "Christian Reflections on Buddhist Missions". Dr Sharkey is a research professor at Boston College who earned an MA in Sanskrit and a PhD in Oriental Studies from Oxford University.

Equally challenging and interesting topics are papers by Dr Dion Oliver Peoples, who will give a rare reflection on "Possibilities for the Dissemination of Theravada Buddhism in Islamic Nations", and Ven Dr Anil Sakya who will present "Thai Dhammaduta in the World.

century - a period of one hundred years ศตวรรษ
renowned - famous and admired for a special skill or achievement ที่มีชื่อเสียง
world-renowned - famous all over the world
scholars - someone who studies a university subject in great detail and knows a lot about it
international - between countries ระหว่างประเทศ
in honour of - to show honour and respect for a great person
Supreme Patriarch - the head and leader of the Buddhist religion in Thailand
influence - the power to have an effect on people or things อิทธิพล
Theravada Buddhism - Theravadan lineages of Buddhism - the oldest surviving school of Buddhism founded in India, for many centuries the main religion of Sri Lanka and most of mainland Southeast Asia (Thailand, Cambodia, Laos, Burma), it is relatively conservative, and generally closest to early Buddhism (See Wikipedia)
global - throughout the world ทั่วโลก
scale - size (relative size)
global scale - size around the world
predominate - to have more power, importance and influence than other people or things
X eclipsed by Y - X has become more important than Y
resurgence - a new increase of activity or interest in a particular subject or idea which had been forgotten for some time การฟื้นคืน, การกลับสู่สภาพ
popularisation - the process of making many people like something (that usually only a small number of people like)
Mahayana Buddhism - the form of Buddism that stresses the role of the Boddhisatvas, this type of Buddhism "spread from India to various other Asian countries such as China, Japan, Vietnam, Korea, Singapore, Taiwan, Nepal, Tibet, Bhutan, and Mongolia. Major traditions of Mahāyāna Buddhism today include Zen / Chán, Pure Land, Tiantai, and Nichiren, as well as the Esoteric Buddhist traditions of Shingon and Tibetan Buddhism" (See Wikipedia)
Boddhisatva - a person who takes "bodhisattva vows" to defer or even give up their own enlightenment to help others gain enlightenment,  life in this world is compared to "people living in a house that is on fire. People take this world as reality pursuing worldly projects and pleasures without realising that the house is on fire and will soon burn down (due to the inevitability of death). A bodhisattva is one who has a determination to free sentient beings from samsara and its cycle of death, rebirth and suffering" (See Wikipedia)
Vajrayana Buddhism - Tantric buddhism which stresses more esoteric aspects of Buddhism, forms the basis of Tibetan Buddhism (See Wikipedia)
esoteric - secret knowledge or mysteries known by a small group of elect few
disseminate - spread
lack - does not have ขาดแคลน
comparative lack of success - not successful compared to others

missionaries - people sent to a place by a religious organization to teach the people who live their about a religion (sent to convert people in other places to their religion)
religious services - religious worship in a group listening to a priest talk about a religious subject (example: funeral services were held for the recently deceased man)
diaspora - the movement of large numbers of people from their home country to other countries in the world (examples: the Jewish diaspora, the Chinese diaspora...etc)
diaspora populations - groups of people in a country who have moved there from their home country (so they often have a different religion and native language)
efforts - people trying to accomplish something, achieve a goal ความพยายาม
local - in the area or country that you live in ท้องถิ่น
host country - the foreign country where a foreigner is living (outside of his or her home country)
Richard Gombrich - a British scholar of Sanskrit, Pāli, and Buddhism, was the Boden Professor of Sanskrit at the University of Oxford from 1976 to 2004 (See Wikipedia)
academic - someone who teaches at a college, or who studies as part of their job นักวิชาการ
excellence - the quality of being extremely good ความเป็นเลิศ
Sanskrit - the ancient language of India, used for almost all ancient Indian poetry, literature and religious books (See Wikipedia)
Pali - the ancient Indian language used to write the sacred books of Theravadan Buddism (See Wikipedia)
keynote speech - the important speech at the beginning of a conference or meeting
dissemination (noun) - the spreading of something such as ideas, beliefs, texts, books, etc

renowned - famous, well-known
development - the gradual growth and formation of something
to his credit - good projects or activities which he was responsible for and completed
Lumbini - the place where the Buddha was born, now an important piligrimage site for Buddhists (See Wikipedia)
pilgrimage (noun) - a journey to a holy place as part of practicing a religion (See Wikipedia on Buddhist pilgrimage)
Lumbini Development Trust - "administers and coordinates the on-going effort to restore Lumbini. That effort, led by Government of Nepal, includes technical assistance from the United Nations Development Programme as well as international contributions from many nations" (See website and description)
political party - a political grouping of politicians working together to win elections, "a political organization that typically seeks to attain and maintain political power within government, usually by participating in electoral campaigns, educational outreach or protest actions. Parties often espouse an expressed ideology or vision bolstered by a written platform with specific goals, forming a coalition among disparate interests" (See Wikipedia)
indigenous - being the first people to live in a place before people arrived from other places เกี่ยวกับชนพื้นเมือง
rights - what the law allows you to have and do, things that people are entitled to and should get สิทธิ์ (See Wikipedia)
indigenous rights - the rights of people who were living in a place first (other groups may have moved there and become more numerous and may dominate because of their large numbers, examples: Tibet, Palestinians, Maoris in New Zealand, Australian aborigines)
renaissance - rebirth, become strong and successful once again

meditation - the form of concentration and mental self-control that forms the core of higher Theravadan Buddhist practice (See Wikipedia on Buddhist meditation)
Mahasi Vipassana meditation - meditation as taught by the Mahasi Sayadaw (See below)
Vipassana - a type of Buddhist meditation based on the Satipatthana Sutta  (See Wikipedia also on Vipassana movement)
Satipatthana Sutta - the most important Theravadan Buddhist writing on meditation, "Cattāro satipaṭṭhānā is the Four Foundations of Mindfulness, bases for maintaining moment-by-moment mindfulness and for developing mindfulness through meditation. Buddha taught satipatthana as the direct path to Enlightenment" (See Wikipedia)
Mahasi Sayadaw - a famous Burmese Buddhist monk (1904-1982) and meditation master "who had a significant impact on the teaching of Vipassana (Insight) meditation in the West and throughout Asia. In his style of practice, the meditator anchors the attention with the sensations of the rising and falling of the abdomen during breathing, observing carefully any other sensations or thoughts that call the attention," nowadays many of the Buddhist meditation centers around the world follow his approach (See Wikipedia)
master - a man who is very good at something ปรมาจารย์
interactive - of a system or computer program which is designed to involve the user  ซึ่งมีการสื่อสารระหว่างกัน
media - radio, television, newspaper, magazines, the Internet considered as a group สื่อ
multimedia - computer programs that combine media: sound, video, pictures, animation, and text
entitled - having the title..., named...
power - energy in the form of electricity produced in large quantities and used to operate lights, machines, and heating
Borobudur - "a 9th-century Mahayana Buddhist monument near Magelang, Central Java, Indonesia. The monument comprises six square platforms topped by three circular platforms, and is decorated with 2,672 relief panels and 504 Buddha statues. A main dome, located at the center of the top platform, is surrounded by 72 Buddha statues seated inside perforated stupa" (See Wikipedia)