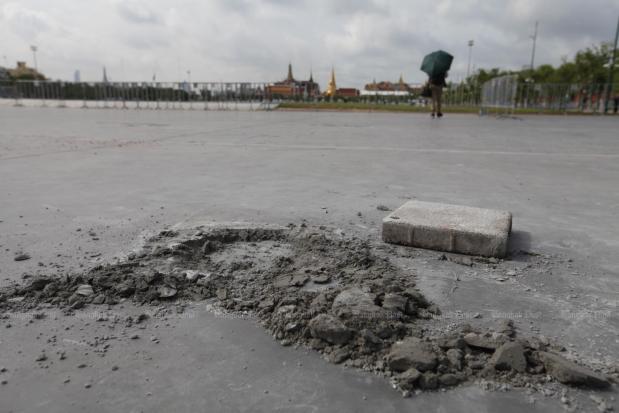 The pro-democracy, or second Khana Ratsadon plaque, is seen removed less than a day after it was fitted by anti-government protesters at Sanam Luang on Sunday morning. The new plaque was intended to replace an old one commemorating Siam's transition from absolute monarchy to a constitutional one under a democratic system in 1932. Photo by Arnun Chonmahatrakool

Two police complaints have been filed against student protest leaders -- which include an accusation of lese majeste -- after the weekend protest at Sanam Luang.

The assistant commissioner of the national police force, Pol Lt Gen Piya Utayo, said one complaint accused the protest leaders of lese majeste. The other is centred around the installation of a pro-democracy plaque at Sanam Luang, or Royal Ground, and the renaming of it as Sanam Ratsadon, or People's Ground.

Tul Sittisomwong, the leader of the so-called "multi-coloured shirts movement" who filed the lese majeste complaint, said the protest leaders had once again crossed the line.

"I don't mind if they talked about politics, the prime minister or the constitution because they have the right to do so, but not about the monarchy," he said.

Meanwhile, one of the protest leaders, Parit "Penguin" Chiwarak downplayed the removal of the plaque, saying the movement will simply recast and distribute similar plaques to be planted at public places across the city.

The plaque was confiscated and sent to forensic investigators.


The protesters also announced a plan to hold another rally on Thursday at the parliament building.

Click "play" to listen to Rally leaders face charges and "Download" to keep this file for educational purpose.

break into : enter by using force -

confiscate : to take away - ยึด

cross the line : to go beyond what is allowed or acceptable -

downplay : to make something seem less important or less bad than it really is - แสดงหรืออธิบายถึงสิ่งใดสิ่งหนึ่งโดยแสร้งว่าไม่สำคัญหรือไม่แย่นัก

plaque : a flat piece of metal, stone, wood or plastic with writing on it which is fixed to a wall, door or other object - แผ่นจารึกตัวหนังสือหรือภาพ

so-called : used for saying that a particular word is usually used for referring to someone or something - ที่เป็นที่รู้กัน