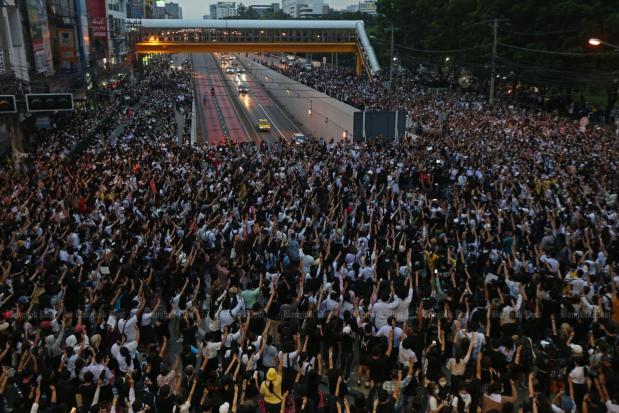 Anti-government protesters, mostly students, fill Ngam Wong Wan and Phahon Yothin roads at Kasetsart intersection in the capital, one of many locations in the country where they gathered on Monday. (Photo by Varuth Hirunyatheb)

Media organisations and academics have called on the government not to violate the freedom of the press after reports emerged that five online outlets face legal action for breaching the state of emergency.

The government is also said to be planning to block the Telegram messaging app as anti-government protesters switched to it after police moved to shut down their Facebook accounts.

Several local media organisations spoke out after the leaking on Monday of an order issued by the government's joint Centre for the Resolution of Emergency Situation (CRES).

In their joint statement, the local media organisations said they were opposed to any forms of media freedom suppression by any side and urged the government not to abuse the law by silencing the media.

They warned that restricting people's access to information could prompt more people to join the protests and make the political situation more delicate and susceptible to violence.

They condemned any use of media outlets to distort facts or provoke violence and urged their peers to make sure that their coverage of the political situation was comprehensive and without bias.

The Foreign Correspondents' Club of Thailand (FCCT) also join the opposition, saying it was "deeply concerned" by the censorship threat, and that it "makes the government appear heavy-handed and unresponsive to criticism, and could stir up even more public anger".


Their concern was echoed by lecturers at Thammasat University's faculty of journalism and mass communications. It issued a statement opposing the government move, insisting that access to information was a basic right and the government should let the media do its job independently.

DES Minister Buddhipongse Punnakanta said none of the named five media outlets - Voice TV, Prachatai.com, The Reporters, The Standard and Free Youth movement - had been banned or taken off the air following the order.


He also explained that live-streaming of anti-government protests was not banned but that broadcasting controversial speeches and defamatory remarks should be avoided. Asked if they would face closure as penalty, he said any action would be taken step by step.

Click "play" to listen to Media groups warn govt and "Download" to keep this file for educational purpose.

abuse : the use of something in a bad, dishonest, or harmful way - การใช้ในทางที่ผิด

avoid : to try to prevent something from happening - หลีกเลี่ยง

bias : an attitude that you have that makes you treat someone or something in a way that is unfair — - อคติ, ลำเอียง, เดียดฉันท์

block : to prevent from being seen - ปิดกั้น

censorship : removing the parts of a book, film/movie, internet content, etc. that are considered to be offensive, immoral or a political threat - การเซ็นเซอร์, การตรวจสอบสื่อต่างๆ เพื่อตัดส่วนที่ไม่เหมาะสมออก

defamatory : saying or writing something bad about someone that is not true and makes other people have a bad opinion of them - ทำลายชื่อเสียง

distort : to change something such as information so that it is not longer true or accurate - บิดเบือน

journalist : a person who writes news stories or articles for a newspaper or magazine or broadcasts them on radio or television - ผู้สื่อข่าว

leak : telling private or secret information to journalists or to the public - การเปิดเผยความลับ

provoke : to cause a reaction - ก่อให้เกิด

susceptible : easily influenced or affected by something - อ่อนแอ,หวั่นไหวง่าย