A study from Silpakorn University indicates that industrial chemicals will continue to pose health hazards to villagers.

Many projects in the Map Ta Phut industrial estate in Rayong were shut down last year due to health and environmental impacts on local communities.

Some have argued that delays in these projects would reduce foreign investment and have a severe impact on Thailand's economy.

Others have argued recently that perhaps Thailand should move away from heavy industry (Read article).

The environmental and health impact assessment studies for Map Ta Phut have been released for public review and they clearly list the hazards that villagers will continue to face. 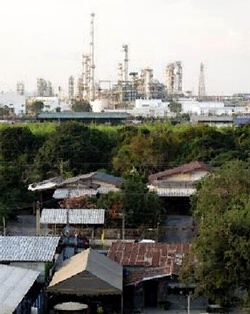 At least 35 of 76 industrial plants suspended last year in Map Ta Phut industrial estate will use hazardous chemicals that can cause several ailments - from respiratory diseases to cancer - in their production process, environmental and health impact studies have found.

Renu Vejaratpimol, of Silpakorn University's faculty of science, has checked the environmental and health impact assessment studies carried out by the operators of the 35 projects

The operators carried out the studies after the Administrative Court ordered the suspension of 76 projects at Map Ta Phut in Rayong at the request of local villagers, who argued the plants were operating illegally.

The court ruled last month that most of the suspended projects could now start work, but the residents have appealed against the decision.

Ms Renu has examined the reports, which were put up for public review between April and July, and found 21 plants would use carcinogenic substances in their production process.

Other toxic substances to be deployed at the factories include chemicals that are harmful to the respiratory system (34 projects), neurological system (24 projects), reproductive system (10 projects), foetus (4 projects), blood system (18 projects), liver and renal (25 projects), skin and eyes (33 projects).

The chemicals are common in petrochemical factories, the academic said.

Map Ta Phut has been declared a pollution control zone, which means pollution emissions must be limited, she said. Ms Renu said she would send her findings to the independent four-party panel working on Map Ta Phut pollution issues.

The panel, chaired by former prime minister Anand Panyarachun, wrapped up its work in June but will meet again on Wednesday to check the progress on the government's pollution reduction scheme.

hazard (noun) - a dangerous thing that can cause damage or accidents สิ่งที่เป็นอันตราย
hazardous (adjective) - dangerous, especially to people's health or safety
indicates - shows that
pose - create some bad situation (examples: pose a hazard, pose a problem)
heavy industry - industry using heavy machines and large factories to produce materials such as steel, coal, cars and ships (See Wikipedia)
process - a series of actions that you take in order to achieve a result แนวทางปฏิบัติ, กระบวน, วิธีการ
environmental and health impacts - effects of a project on health and the environment
impact - an effect or influence ผลกระทบ
assessment - the process of making a judgment or forming an opinion, after considering something or someone carefully การประเมิณสถานการณ์
environmental and health impact assessment studies - See next two items below
Environmental Impact Assessment (EIA) - a report that details the likely positive and negative effects a project may have on the environment (See Wikipedia)
Health Impact Assessment (HIA) - procedures to judge the potential effects of a construction or industrial project on the health of a population (See Wikipedia)
review - studying a policy, idea or situation to decide whether it is suitable or satisfactory, 2. looking carefully at all the information relevant to a situation
public review - when everyone in the country (who is qualified and has an interest) can study a policy and suggest changes

come clean - tell the truth (about something that was hidden before)
plants - factories โรงงาน
suspended - stopped for a period of time (temporarily)
faculty - a group of departments in a college which specialize in a particular subject or group of subjects คณะ
operators - businesses running some kind of business
Administrative Court - a court that solves disputes concerning the exercise of public power and government administration, often settles disputes between the private sector and government agencies ศาลปกครอง (See court website, history of Thailand's administrative court and Wikipedia on administrative law)
Map Ta Phut Industrial Estate - one of Thailand's largest industrial estates located in Rayong (See interactive map)
industrial estate, industrial park - a special area especially for factories with special facilities (roads, transportation, water, electricity, waste disposal) (See Wikipedia)
suspension - stopping for a period of time (temporarily)
local - in or related to the area that you live, or to the particular area that you are talking about ท้องถิ่น

residents - people who live in an area ผู้อยู่อาศัย
appeal - to request a law court to change its decision or retry the case ขออุทธรณ์
decision - a legal decision by a court of law (examples: that a person is guilty or innocent of a crime, that one party is responsible for damage caused another and should pay them, etc )
examine - look at something carefully to learn about it
put up for public review - made available to everyone who wants to read and comment on them
carcinogenic - can cause cancer
toxic - poisonous and harmful to people, animals or the environment เป็นพิษ
deployed - prepare a resource so that it is ready to be used
respiratory - involving breathing เกี่ยวกับการหายใจ
respiratory system - the part of the body related to the process of breathing air in and out [and the parts of the body carrying the air from mouth to lungs] (See Wikipedia)
neurological system - related to the nervous system (brains, spinal chord, nerves) (See Wikipedia)
foetus - the baby inside his or her mother's body before birth, after the "embryo" stage, also spelled "fetus" (See Wikipedia)
reproductive system - the parts of the body a man and a woman use to create babies (See Wikipedia)
renal - related to the kidneys

common - found often, happening often
petrochemical - chemicals made from oil ปิโตรเคมี
academic - someone who teaches at a college, or who studies as part of their job นักวิชาการ
pollution control zone - an area where special measures to control pollution are taken
emissions - amounts of gas, heat, light, etc. that are sent out การปล่อยออกมา
emissions - gases released into the air (from cars, factories, etc)
findings - what was discovered, the facts uncovered through research or by a special committee
independent - free from outside influence เป็นอิสระ (which includes not taking help or money from other people พึ่งตนเอง)
party - one of the people or groups of people involved in an official argument, arrangement or similar situation คู่กรณี
panel - a group of people brought together to discuss, investigate, and give advice on a subject
issues - subjects that need to be considered ประเด็น
wrapped up - finished
progress - completing tasks that move you towards achieving a goal พัฒนาการ advancing, going forward ก้าวหน้า  improving and developing over time ความก้าวหน้า
scheme - a plan that is developed by a government or large organisation in order to provide a particular service for people แผนการ โครงการ