We can test out our new vocabulary list with a story on a storm that hit Koh Chang and nearby areas yesterday. 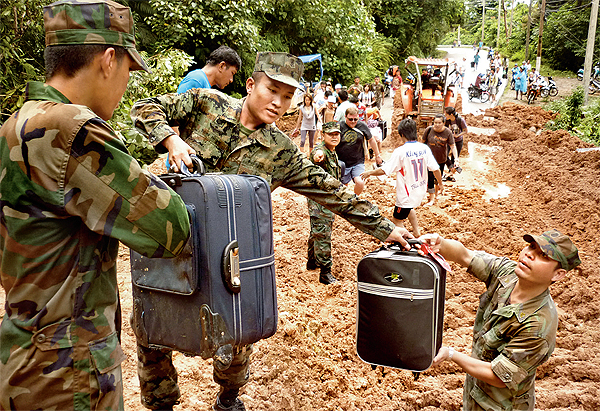 Navy personnel help Thai and foreign tourists with their luggage as they are evacuated to safety yesterday after a mudslide was triggered by heavy rain and flooding on the resort island of Koh Chang in Trat. JAKKRIT WAEWKRAIHONG

Flooding and landslides caused by heavy rain have battered the popular tourist island of Koh Chang in Trat, leaving one dead and one injured.

The island was hit by heavy rain from Sunday night until early yesterday.

Strong winds knocked down at least 20 high-voltage power poles, resulting in a blackout across the holiday island.

Houses and shops near White Sand, Kai Bae and Klong Son beaches were damaged by flash floods and mudslides.

White Sand beach, located closest to the island's ferry pier, is the most badly affected area.

A landslide buried a two-storey building at Little Chang resort near the beach at 3am yesterday, killing Naree Koke, 43, a Cambodian national who worked at the resort.

Another Cambodian worker, known only as Rin, who was Naree's husband, was buried under concrete debris and mud for more than 10 hours before he was pulled out by rescue volunteers. He was conscious but exhausted.

Kampon Chareonkajornkul, head of the rescue team, said officials were unable to provide early help due to the rain and lack of heavy equipment.

The worst part was in front of KC Grand Resort and Spa where the road was covered with mud for 100 metres.

Hundreds of local and foreign tourists yesterday faced difficulties leaving the holiday island. They had to walk along the muddy road to catch a charter bus to the ferry pier.

However, many regarded the trip as an adventure and took photos of themselves with the mounds of dirt.

Officials in Trat were assisted by the navy in rescue and relief efforts.

Parts of the road covered by mud and rubble were expected to be cleared for traffic by yesterday afternoon.

The electricity on Koh Chang will be back on today, authorities said.

The overnight rainfall was also reported to have triggered flooding and damaged a weir in Laem Ngop district in Trat.

The golf course is located on top of a hill near Wat Dhammaros in tambon Pa Yoob Nai.

Flash floods from the reservoirs devastated the temple and more than 100 houses down the hill.

Nuan Chuaklangyai, 46, a nun who lives at Wat Dhammaros, was reported missing in the flood.

Local officials and villagers are searching for her. They found her white attire 20 metres from the reservoirs.

An inspection would be made to see if the reservoirs met construction standards, Mr Tawatchai said.

batter – to hit repeatedly with great force ทุบตีติดต่อกัน
blackout – a sudden loss of electrical power ไฟดับ
isle – island
evacuate – to cause to leave a place because it is not safe เคลื่อนย้ายออกจาก
landslide – a large amount of earth, mud (a mudslide) or rocks falling down the side of a mountain or hill  แผ่นดินถล่ม
injured – hurt in an accident or attack ซึ่งได้รับบาดเจ็บ
flash flood – a flood that happens suddenly without warning น้ำที่เกิดท่วมในที่ต่ำโดยฉับพลันทันทีและไหลลดลงอย่างรวดเร็ว
mudslide – a large amount of mud falling down the side of a mountain or hill a large amount of wet earth that falls down a hill and may cause damage and kill people ทะเลโคลนที่มาจากภูเขาทำลายบ้านเรือนและผู้คน
ferry - a boat for taking passengers across an area of water, especially as a regular service เรือรับส่งข้ามฟาก
pier – a platform sticking out into water which people walk along or use when getting onto or off boats สะพานที่ยื่นออกไปในน้ำ
buried – covered completely by something, especially soil, mud, etc.
debris – broken pieces that are left when something large has been destroyed  เศษ ซากปรักหักพัง  ซากสิ่งของที่ถูกทำลาย
rescue – to save someone form a dangerous or unpleasant situation ช่วยชีวิต
volunteer – someone who is not paid for the work that they do อาสาสมัคร
conscious - aware ที่ตระหนักได้
exhausted – extremely tired เหน็ดเหนื่อย
block – to stop something from moving through or along something else ปิด กีดขวาง
adventure – an unusual, exciting and possibly dangerous activity such as a journey or experience, or the excitement produced by such an activity การผจญภัย
mound – a pile of something, such as earth or stones กองดิน กองหิน
relief – help; assistance การช่วยให้พ้นภัย
rubble – debris; broken pieces of stone and brick from building, walls, etc., that have been destroyed ซากปรักหักพัง
authorities – people who have the power to make decisions or enforce the law เจ้าหน้าที่ผู้มีอำนาจ
trigger – to cause กระตุ้น
weir – a place in a river or stream where a wall has been built across it to control the flow of water เขื่อนเล็กๆ
reservoir – a natural or artificial lake where water is stored อ่างเก็บน้ำ
devastated – badly damaged or destroyed (noun: devastation) ถูกทำลายล้าง
attire – the clothes that someone is wearing เครื่องแต่งกาย
volume – an amount of something ปริมาณ
embankment – thick walls of earth or sandbags intended to prevent water from a river or the sea from flooding the area เขื่อน,มูลดิน,ตลิ่งทาง,การสร้างเขื่อนกั้น
inspection – the act of looking closely at something or someone and to check that everything is as it should be; examination การตรวจสอบอย่างละเอียด
standard – a level of quality or achievement, especially one that people generally consider normal or acceptable มาตรฐาน