Student chefs from Thailand won a special prize for style at a recent culinary competition held in South Korea.

The students study at the famous International Culinary School of Suan Dusit Rajabhat University. The competition is the LG Life Tastes Good Championship.

Cooking is a manual skill highly sought after in the job market acquired more often in vocational schools and on-the-job apprenticeships than in universities. Highly skilled welding is another example.

Many young people have are starting to realize that these manual skills can lead to fulfilling careers and that university is not the only option available (Read previous articles #1 and #2). 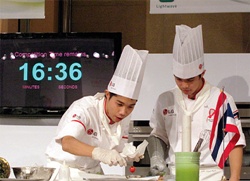 At 6pm on September 29, the convention hall of Grand Hilton Hotel in Seoul was filled with culinary sparkles.

The spacious ballroom had been transformed into a state-of-the-art live cooking forum where 40 amateur chefs from 22 countries gathered to showcase their kitchen talents, using some of the world's latest cooking technologies through smart cooking appliances in LG Life Tastes Good Championship Global Final 2010....

...''Duck of Harmony'' by Siwawut Sriprapha and Khunuch Chanyudhasatr, two students from the International Culinary School of Suan Dusit Rajabhat University, triumphed over some 200 recipes at the preliminary rounds in Thailand.

Smartly representing the exquisite character of Thai cuisine, this slightly adapted version of gaeng phed ped yang, or roasted duck in red curry, earned the Thai team the ''Stylish Chef Prize'', one of the seven awards at this global final championship.

Because a typical gaeng phed ped yang usually includes fresh fruit, we saw it as a good opportunity to have fun with the colours, textures and tastes of tropical fruit.''

Unlike an ordinary form of the curry dish, of which shredded pieces of roast duck and fragments of fruit come bathed in curry, Siwawut and Khunuch's version looked sleeker and more westernised.

It presented neat slices of duck meat, previously pan-seared, glazed and oven-roasted, beautifully displayed on a bed of grilled pineapple wedges with thick red curry as a dressing.

The spiciness of the curry was toned down by the sweet and refreshing taste of grapes, cherry tomatoes and lychee juice, while the velvety blue-coloured jasmine rice gave an awe-inspiring look to the creation.

''Our blue rice seemed to get the most attention from fellow contestants and the judges. Many of them came to ask where we got the blue colour from. We told them it's from dok anchan (butterfly pea), which is a Thai flower, and they were thrilled,'' said Khunuch.

The LG Life Tastes Good Championship is the only international cooking competition for amateur chefs that is endorsed by renowned organisations such as the World Association of Chefs' Societies (WACS) and Le Cordon Bleu culinary institute with support from top-star chefs.

A ''smart cooking'' factor was also considered. This was to look at the minimum use of artificial flavour, and whether the dish was low in fat and cholesterol. Also considered was the use of animal products, waste of ingredients and nutritional balance.

''I think our team was awarded the Stylish Chef prize because our presentation of the dish stood out,'' said Khunuch. ''We've gone through a lot of rehearsals and luckily we have a good team of experts from our university to help polish up our creation.''

chef - a trained professional cook in a restaurant (See Wikipedia)
culinary - connected with cooking or kitchens เกี่ยวกับการทำอาหาร
International Culinary School of Suan Dusit Rajabhat University - established as the first official home science school in Thailand in 1934 to instruct women about home science for 4 years curriculum  (See website)
recipe - instructions for how to prepare food (See Wikipedia)
luscious - food that tastes, looks and smells especially good
LG Life Tastes Good Championship - a major international cooking competition sponsored by the Korean conglomerate LG (See website and videos)
sponsor - pay part of the money needed for an event, usually in exchange for advertising ผู้อุปถัมภ์conglomerate - a large company that owns many smaller companies doing many different kinds of businesses
LG -  "South Korea's second largest conglomerate that produces electronics, chemicals, and telecommunications products and operates subsidiaries like LG Electronics, LG Display, LG Telecom and LG Chem in over 80 countries" (See Wikipedia)
manual - using your hands to perform job tasks sought after - many people are looking for it, trying to find it X acquired at Y  - you can get X at Y vocational schools - schools that teach practical work skills (See Wikipedia)apprenticeships - learning a job skills by actually working under a skilled worker for a period of time (See Wikipedia)welding - the practice and art of joining materials together such as metal (See Wikipedia)
realize - arrive at an understanding about something
fulfilling - happy and satisfied because you are using all your abilities and doing something important (being all you can be)
option - one choice among many possible choices
available - able to get or use something

convention - a large formal meeting of people who do a particular job or have a similar interest, or a large meeting for a political party การประชุม
sparkles - 1. tobe bright lively and interesting, 2. to shine with small points of light
spacious - large and with a lot of space กว้างใหญ่,มีเนื้อที่มาก
ballroom - a very large room used for dancing (balls) or large meetings
transformed - changed
state-of-the-art - equipment or technology that uses new and advanced ideas and features

live - when a show is presented or broadcast as it happens, without being scripted or planned a lot beforehand
forum - a place where people discuss and debate issues, where people can express their ideas and opinions การประชุมแสดงความคิดเห็น
showcase - to show the best qualities or parts of something แสดงจุดเด่นของสิ่งของหรือคน
talent - being skilled in some task or activity, doing some task well ความสามารถพิเศษ, พรสวรรค์

harmony - a situation in which people live and work together in a peaceful way ความสามัคคี
triumph - win
preliminary - an early part of a competition happening before the finals; an event or action that introduces or prepares for something else ขั้นต้น, ขั้นแรก
preliminary rounds - early parts of a competition (to reduce the number of competitors)
smart (adjective) - looking tidy, clean and fashionable
smartly (adverb)
exquisite - very beautiful; delicate สวยงาม, วิจิตร, งดงาม, อ่อนช้อย
adapt - change to meet a new situation version - a form of something different from the original and other forms that have been produced (example: the latest version of the software product)
slightly adapted version - changed slightly into a new form
global - throughout the world ทั่วโลก

opportunity - a situation when it is possible to do something that you want to do (See glossary)
texture - the way something feels when you touch it (also the way food feels in your mouth when you eat it)
tropical - relating to the hottest area of the Earth, between the Tropic of Cancer and the Tropic of Capricorn ในเขตร้อน
shredded - cut into very small narrow pieces
fragments - little pieces of something
bathed in - covered in some liquid
sleek - 1. attractive and fashionable in design, smooth and shiny
westernised - made to be like something found in Europe, the US, Australia, etc...

sear - to burn the surface of something with extreme heat
pan-seared - burn the surface of food being cooked in a pan with extreme heat
glazed - food that has a smooth shiiny top layer for decoration or protection (example: glazed pastries)
roast - to cook meat or vegetables in an oven or over a fire
oven - a machine that heats, bakes or dries things, used in cooking and pottery (See Wikipedia)
bed - layer of food with other food on top of it
grilled - cook with very strong heat underneath, with a flame underneath ย่าง
wedge - has a shape like a piece of pie or cake, wide at one end and thin at the other end (See Wikipedia) ซึ่งมีลักษณะเป็นลิ่ม
dressing - a liquid that you pour over food (example: a dressing of oil and vinegar poured over the salad)

tone down - make less strong or intense
refreshing - giving you energy after feeling tired (because of the eat or boredom, for example)
velvety - very soft and smooth
jasmine rice - Thai Hom Mali rice, a variety of rice discovered in Thailand, a long-grain variety of rice that has a nutty aroma and a special taste (See Wikipedia on Jasmine rice)
awe - feeling of great respect (admiration, looking up to someone)
inspire - to make someone feel in a certain way
look - the way something appears to people looking at it
awe-inspiring look - when people look at it they feel great respect and admiration
creation - something that someone created (with their imagination)
attention - lots of people looking at and interested in something
fellow - used for talking about people who are similar to you or are in the same situation เพื่อนร่วมชะตากรรม
contest - a competition in which the greatest skill wins
contestant - a person competing in a contest
thrilled - very pleased and excited about something

factor - a fact or situation which influences the result of something ปัจจัย
minimum - the smallest amount possible
artificial - not natural, made by humans จำลอง ที่มนุษย์สร้างขึ้น, ที่ประดิษฐ์ขึ้น
cholesterol - a chemical found in food, consuming high quantities over time is associated with heart disease (See Wikipedia)
ingredients - foods that are used with other foods in the preparation of a particular dish ส่วนประกอบ
nutrition - providing the materials necessary to your body so it can grow and be healthy, many common health problems can be prevented or alleviated with good nutrition (See Wikipedia)
nutritional balance - eating food that has all the materials you need to be healthy (not to much of any one thing)
stand out - easy to see and notice because it is different
rehearsal - practicing for a play or musical performance, practice before the "live" performance in front of an audience
polish up - improve a skill by practice