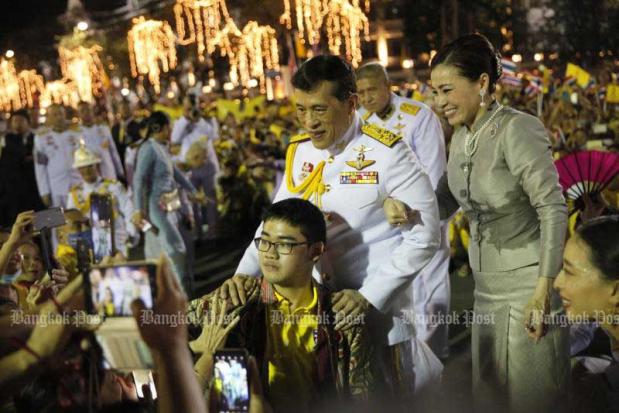 Their Majesties the King and the Queen are greeted by a yellow-shirt crowd outside the Grand Palace who turned out to show their respect and love for the monarchy on Sunday. (Photo by Wichan Charoenkiatpakul)

His Majesty the King called Thailand the "land of compromise" on Sunday, and declared "love" for all Thais after months of protests calling for reform of the monarchy.

On Sunday, thousands wearing yellow shirts -- the royal colour -- waited near the Grand Palace holding portraits of Their Majesties the King and the Queen.

The monarch was stopped by a reporter with Britain's Channel 4 who asked him about protesters calling for reform.

"We love them all the same," he told the reporter repeatedly according to a clip posted on Channel 4's official Twitter account.

When asked if there is room for compromise, he said: "Thailand is the land of compromise."

As His Majesty moved through the crowd, royalists chanted "Long live the King!"

His Majesty has been in Thailand in recent weeks to mark a Buddhist holiday and the anniversary of HM King Bhumibol's passing.

The visit has coincided with non-stop demonstrations from mostly young activists, who have staged rallies drawing thousands to Bangkok's intersections as a show of defiance.

While the movement is leaderless, they are united in their demand for the removal of Prime Minister Prayut Chan-o-cha.


Controversially, the students have also called for a clear accounting of the palace's finances -- which the extremely wealthy king took control of in 2018 -- and for the monarch to "stay out" of politics.


So far, the anti-government protests have remained peaceful.

But scores of students and activists have been arrested and charged -- some with the serious crime of sedition.

Over the weekend three high-profile student leaders were released on bail, only to be swiftly accosted as authorities attempted to re-arrest them on another charge.

A scuffle with plainclothes police landed them in hospital.

accost : to go up to somebody and speak to them, especially in a way that is rude or threatening - ทัก (ด้วยท่าทีที่ไม่สุภาพหรือขู่ให้กลัว)

accounting : the preparation of financial records for a company, organisation or person - การบัญชี

anniversary : a date when you celebrate something that happened in a previous year that is important to you - วันครบรอบ

coincide : to happen at the same time as something else - เกิดขึ้นพร้อมกับ

compromise : a way of solving a problem or ending an argument in which both people or groups accept that they cannot have everything they want - ประนีประนอม

defiance : the refusal to obey - การขัดขืน

portrait : a painting, photograph, drawing, etc. of a person - ภาพวาดหรือภาพถ่ายคน

reform (noun): improving a system, an organisation, a law, etc. by making changes to it - การแก้ไข, การปรับปรุง,

scuffle : a short and sudden fight, especially one involving a small number of people - การต่อสู้กันอุตลุด