The worst floods in decades continue to ravage parts of the Northeast and Central plains. 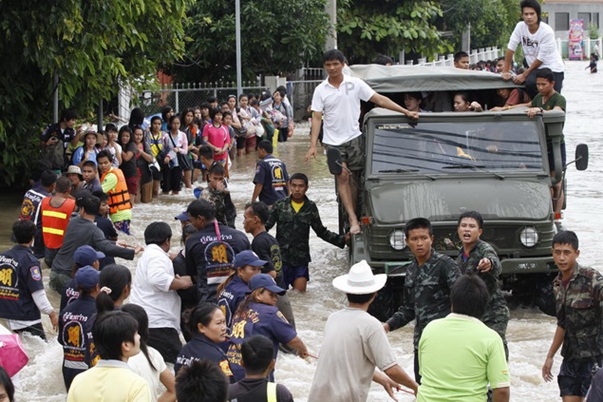 The flash flood reached a critical level, leading the army to deploy soldiers to speed up evacuations. SAROT MEKSOPHAWANNAKUL 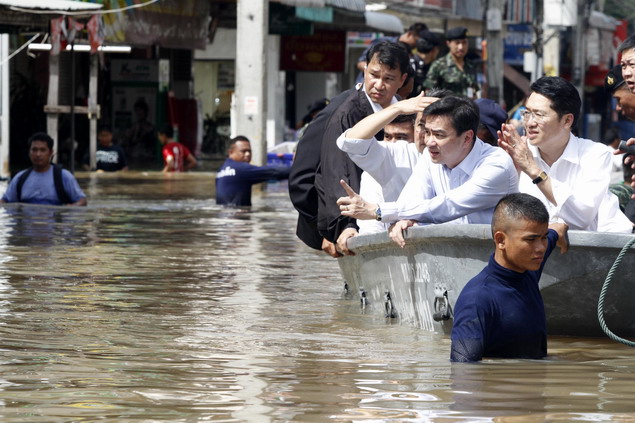 Nakhon Ratchasima and its provincial capital have been ravaged as flash floods wreak havoc in the Northeast and Central Plains following heavy weekend monsoon rains.

Swirling currents which swept through the province’s Muang district have crippled government and private businesses and forced hospitals to close.

The flooding is most critical in Pak Thong Chai and Muang districts. Five people have been killed in Korat. One person was found dead in Pak Chong district, two in Sung Noen and two in Dan Khun Tho, officials said.

Locals asked him to speed up distribution of survival kits as relief operations have not reached many areas.

Heavy military trucks and flat-bottom boats were used to evacuate people from flooded areas and deliver food and water to affected communities.

Most roads in the provincial town were under water. Many cars and pickup trucks were submerged and left on the street because their owners were unable to move them to higher ground before the deluge hit.

‘‘I’ve never seen a flood disaster this big in my entire life. I remember there was a big flood in 1959, but that was much less devastating than this one,’’ said a woman in her 50s as a rescue worker evacuated her mother from their flooded home in Muang Nakhon Nayok municipality to safety.

Before the rescue unit arrived, residents joined forces to help each other. Men carried the young and old on their backs to safety through the swirling currents.

Other villagers struggled desperately to retrieve their belongings from the surging waters.

‘‘Please help me build a [flood] barrier,’’ a woman who owns a sports equipment shop in the municipality asked a journalist as she tried to create a wall of sandbags in front of her shop.

The floods yesterday hit three hospitals in the province, leaving thousands of staff, patients and visitors stranded on the higher floors. 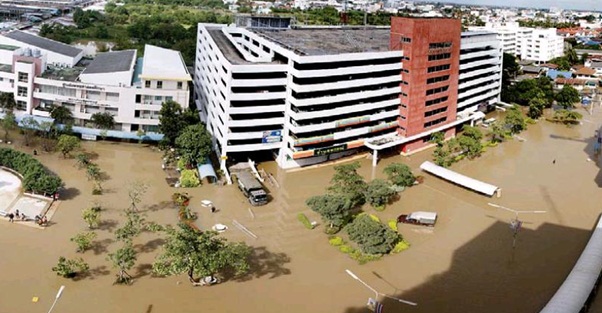 Thousands were stranded yesterday at Maharat Hospital in Nakhon Ratchasima's Muang district as the hospital and a vast area surrounding it were inundated. SAROT MEKSOPHAWANNAKUL

At Maharat Hospital in Muang district, the floodwaters in the hospital were about 1.5 metres high yesterday afternoon.

The hospital was ill-prepared for the inundation and the bodies of six patients who had died and were being kept on the ground floor were seen floating in the mortuary.

The hospital has set up a temporary service centre outside the hospital to serve patients and relatives.

About 250 patients at the nearby Psychiatric Nakhon Ratchasima Ratchanakharin Hospital fled to higher floors after the ground floor was flooded.

At St Mary’s Hospital off Mittraphap Road, the ground floor was also flooded. All hospital staff, patients and their relatives were stranded.

Officials said about 6,000 people were trapped at Maharat and St Mary’s hospitals. They asked for donations of food, drinking water and other essential items for those trapped.

Affected villagers say what is most needed is cooked rice as they have no electricity or cooking utensils. Many villagers want sandbags to try to block floodwaters from entering their homes.

flash flood – a flood that happens suddenly without warning น้ำที่เกิดท่วมในที่ต่ำโดยฉับพลันทันทีและไหลลดลงอย่างรวดเร็ว
critical – very serious วิกฤต
deploy – (of police or soldiers) to put in place ready for action ส่ง (ทหารตำรวจ) ประจำการ
evacuate (noun form: evacuation) – to cause to leave a place because it is not safe เคลื่อนย้ายออกจาก
batter – to hit repeatedly with great force ทุบตีติดต่อกัน
troops – soldiers, especially in large numbers กองทหาร
rescue – to save someone form a dangerous or unpleasant situation ช่วยชีวิต trapped – to be in a dangerous or unpleasant situation from which it is difficult or impossible to escape ถูกกับดัก
death toll – the number of people killed ยอดผู้เสียชีวิต
ravage – to destroy something or damage it very badly ทำให้เสียหาย, ทำลาย, ล้างผลาญ
monsoon – the season of heavy rain during the summer in hot Asian countries มรสุม
wreak havoc – to create great disorder and confusion ทำลาย
swirling – moving quickly in circles หมุนวนอย่างเร็ว
sweep – to move or spread quickly through an area; to move something or someone with powerful force  เคลื่อนไปอย่างรวดเร็ว, พัดพาเอาไป
crippled – damaged and prevented from working properly ที่พัง ที่ใช้การไม่ได้
volunteer – someone who is not paid for the work that they do อาสาสมัคร frantically – behaving in a wild and uncontrolled way because you are frightened or worried; done in a very urgent way อย่างไม่สามารถความคุมอารมณ์ได้
residents – people who live in a particular area ประชาชนที่อาศัยในท้องที่
operation – a planned activity involving a lot of people, especially soldiers, police officers or rescue workers การปฏิบัติการ
hamper – to stop someone or something from making progress or developing; to hinder ขัดขวาง, เป็นอุปสรรค
currents – the steady flowing motions of the water in rivers, lakes or the sea กระแสน้ำ
inspect – to look at something carefully ตรวจสอบ
municipality – a town, city or district with its own local government เทศบาล
distribution – the process of giving something out to many different places  การแจกจ่าย
survival kit – a box or container containing things that you need in order to stay alive if you are in a difficult or dangerous situation in which you are unable to get help
relief – money, food, medicine etc. that is given to help people in places where there has been a natural disaster, war, etc. เครื่องบรรเทาสาธารณภัย
community –  the people who live in an area ชุมชน
submerged – under water; inundated  จมน้ำ อยู่ใต้น้ำ
deluge – a sudden, very heavy rainfall or a sudden flow of a large amount of water ฝนตกหนัก
devastate – to badly damage or destroy (noun: devastation) ทำลายล้าง
struggle – to try hard to do something that you find very difficult พยายาม
desperate – very worried or confused because you do not know how to deal with an unpleasant or dangerous situation อย่างสิ้นหวัง  อย่างหมดหวัง
retrieve – to recover; to get something back, especially something that is not easy to find ได้กลับคืนมา
belongings – the things you own ข้าวของเครื่องใช้
barrier – a wall, pile of sandbags, etc., that prevents water from entering สิ่งกีดขวาง
journalist – a person who writes news stories or articles for a newspaper or magazine or broadcasts them on radio or television ผู้สื่อข่าว
inundate – to flood; to submerge ท่วม, ทำให้จมลงใต้น้ำ
disaster – an unexpected event, such as a very bad accident, a flood or a fire, that kills a lot of people or causes a lot of damage ความหายนะ ความล่มจม ความโชคร้าย
zone – an area that has an important or typical feature; an area where a particular activity is allowed or not allowed พื้นที่, บริเวณ, เขต
patient – someone who is receiving medical treatment คนป่วย, คนไข้
stranded – left somewhere with no way of going anywhere else ปล่อยเกาะ ถูกทิ้งไว้mortuary – a place where a dead body is kept ห้องเก็บศพ, ที่บรรจุศพ
flee (past form: fled) – to leave a place or person quickly because you are afraid of possible danger หนี อพยพ
donation – money or goods that you give to an organisation, especially one that helps people เงินบริจาค
essential – necessary ที่จำเป็น
utensil – something that you use for cooking or eating with เครื่องใช้ในครัว, เครื่องใช้