For years elephants were used by their owners to get money from tourists on Bangkok streets and suffered in many different ways. Things have finally changed. 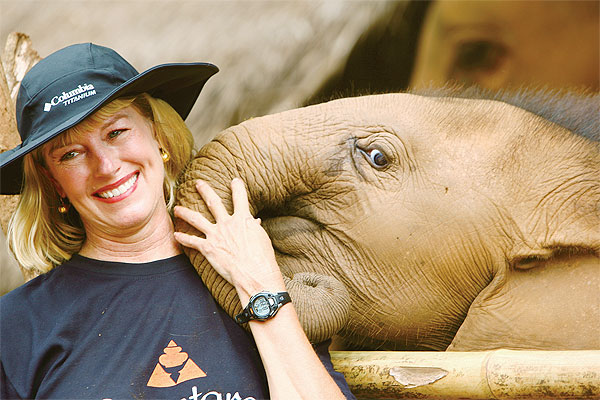 Working in a dangerous habitat far from home some elephants fell down holes in Bangkok streets (See photo in article). Others were electrocuted or were hit by cars.

The city of Bangkok passed laws against this that were eventually enforced.

Where did they go?

Chiang Rai's elephant camp is one destination. Elephants there lead a much more natural life.

Jumbos find a retreat: Elephant camp based at a Chiang Rai resort pays mahouts to keep their animals off the streets by Narisa Leelathawornpanya

Lod Insamran, a mahout from Surin, is paid to keep his elephants off the streets.

Six years ago he joined an elephant camp run by the Golden Triangle Elephant Foundation in Chiang Rai, where he now lives and works.

Previously, he took his elephant to roam the streets of Bangkok begging for food and money. However, he gave that up when the elephant camp asked him to stop, and had his elephant work for tourists instead.

The foundation, in the compound of Anantara Resort Golden Triangle in Chiang Saen district of Chiang Rai, pays him 15,000 baht a month to "rent" his elephant.

He takes his six-year-old elephant "Pluem" to welcome guests at the resort.

Mr Lod said he makes much less than he did when he roamed the streets.

But making a living that way is risky. It is now difficult to make money walking elephants in the city. People are unwilling to help and we are at risk of being arrested," he said.

Elephant bathing is one of the highlights of the activities offered at the Anantara Resort Golden Triangle’s elephant camp.

City Hall has banned elephants from Bangkok's streets and says it will impose fines and jail terms on mahouts found with elephants begging for food.

Mr Lod now works for the foundation. He persuades mahouts roaming city streets with their elephants to join the foundation's elephant camp project.

The foundation provides them with shelter, food and pay.

At present, 20 elephants aged between two and 12 years are under the care of the foundation and 20 mahouts and their families, mostly from Ban Ta Klang in Surin's Tha Tum district, stay there.

The elephant camp is in a resort rich in wild plants and natural water sources, which makes it an ideal habitat for elephants.

The elephants are domesticated and trained to be with humans.

The resort set up an elephant camp, the first of its kind in Thailand, as part of an effort to help ease the problem of elephants roaming city streets.

Initially, four elephants were rented from the Thai Elephant Conservation Centre in Lampang to work and entertain guests at the resort.

The resort offered its guests a course in learning basic commands for dealing with elephants, skills to ride and bathe them, and look after them.

John Roberts, director of the elephant camp, said the course is a hit with guests who are impressed by the charm and cleverness of the animals. They are issued certificates after completing the course.

I am charmed by their way of life, by the way mahouts communicate with their elephants," Mr Roberts said.

A tourist learns how to control an elephant on a mahout training course.

After the success of the course, Mr Roberts set up the foundation in 2005 as part of his efforts to advance elephant welfare. "We have to make an investment to ensure they are well looked after because they are far away from their homes," Mr Roberts said.

natural - 1. a place in the middle of nature with a lot of trees, rivers, mountains around it (not the city), 2. a place where a thing is usually found, where it was first found, a place where it fits
setting - a place where something is (and all the things, people and emotiuons that are part of that place)
electrocuted - dangerous accident when electricity enters body (causing injury and death)

jumbo - another way to say: "elephant"
retreat - a nice place that people can go away to in order to relax (examples: a house in the country, a resort) mahout - a person skilled in riding and looking after elephants ควาญช้าง,  คนเลี้ยงช้าง
Golden Triangle Elephant Foundation - the organization that runs the elephant camp to keep elephants off the streets that is discussed in the article (See website)
roam - to move or travel around in no particular direction เดินโดยปราศจากจุดหมาย
foundation - an organisation that provides money for things such as medical research or for a charity มูลนิธิ
compound - an area enclosed by a fence or wall in which people work or live บริเวณ
Anantara Resort Golden Triangle - the luxury resort at the Golden Triangle in Chiang Rai Thailand with the elephant camp described in the article (See resort website and elephant camp webpage)
rent - to pay money for the use of something for a period of time เช่า

risk - the possibility that something dangerous or unpleasant might happen ความเสี่ยง
risky - involving the possibility of danger, harm or failure เสี่ยงอันตราย
highlights - one of the important and noticeable things in an acticity or event
banned - officially not allowed to do something ถูกห้าม, ห้ามอย่างเป็นทางการ ถูกตัดสิทธิ
impose - to force someone to accept something กำหนด,บังคับ
impose - to introduce something such as a new law or new system and require people to accept it การกำหนด, นำกฎหมายมาบังคับใช้
fine - the punishment of paying a crime when a person breaks the law
jail terms - when a criminal is punished by staying in jail for a period of time

persuade - say things to make people believe or do something  ชักชวน
shelter - a house or apartment to live in, a place where people are protected form danger or bad weather ที่หลบภัย ที่พักชั่วคราว
rich - interesting, with a lot of different qualities, experiences or events อุดมไปด้วย
wild plants - plants growing by themselves (not planted by humans), usually growing in a forest not a garden or farm
natural - found in nature (not made in a factory by humans) ตามธรรมชาติ
water sources - places where water comes from in nature such as rivers, streams or lakes (not the government water supply)
ideal - the best possible ดีที่สุด, ที่เป็นอุดมคติ
habitat - the type of place that a particular animal usually lives in or a particular plant usually grows in ถิ่นที่อยู่ของพืชหรือสัตว์

domesticate - train an animal to live with or work for humans
effort - an attempt to do something ความพยายาม
skills - a type of work or task requiring special training and knowledge ทักษะ ความสามารถเฉพาะทาง
bathe - wash ชำระล้าง
X is a hit - many people really like X
impressed - looking up to, admiring, thinking that someone is very good because of some quality, achievement or skill   ติดตาติดใจ
charm (noun) - when a person (or animal) has pleasant, nice, attractive things about them that attract others to them เสน่ห์, ความเย้ายวนใจ
clever (adjective) - good at learning and understanding things, understands and picks things up quickly and easily, smart, bright  เฉลียวฉลาด
cleverness (noun) - the condition or state of a person being "clever"
impressed - admiring someone or something very much because of an unusually good quality or achievement ประทับใจ
issued - made available ออกใหม่
issued certificate - gave a piece of paper (official document) that is proof that you have skills or attended a course
charmed (verb) - when
training - to teach people how to do an activity or job การฝึกฝน
efforts - the work done towards achieving some goal, people trying to accomplish something, achieve a goal ความพยายาม
welfare - good care and living conditions, in this case, for animals ความสะดวกสบาย, ความมีสุขภาพดี, สวัสดิภาพ
investment - taking your money and putting it into projects to make a profit or earn interest or some other benefit (here: protect elephants)
ensure - to make certain that something happens or is done รับรอง ให้ความมั่นใจ
look after - take care of
well looked after - people take care of them well (so they have a good and comfortable life)