It was inevitable. The flood waters in upstream areas had to make their way downstream and now six more provinces are under flood alerts 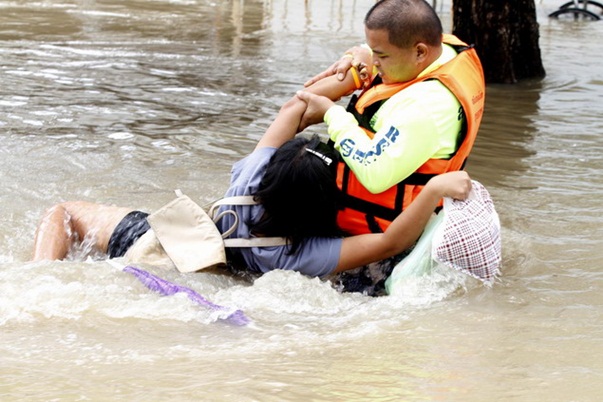 Many people were injured by strong tides that swept them away. Villagers were forced to hold on to safety ropes in order to walk through flooded street. SAROT MEKSOPHAWANNAKUL

When you finish with the story below and feel comfortable with the vocabulary, look before for a television broadcast by Bangkok Post presenters on the same subject.

Six Central Plains provinces have been placed on high alert against heavy flooding expected to be triggered by overflows from the North.

The six provinces would be unable to avoid flooding as a vast amount of water from the North and from Pasak Jolasit Dam in Lop Buri was approaching.

The department is trying to drain as much water as possible from the Chao Phraya River basin before Saturday, when the sea water level will begin to rise because of king tides.

Irrigation officials are worried the rise in the sea water level from Saturday to next Tuesday would worsen the flood situation in the Central Plains as it would hamper drainage.

"We are trying our best to minimise the flood impact but it is impossible to make all areas [in the Central Plains] free from flooding," Mr Boonsanong said.

Bangkok is well prepared for the situation as the capital has the capacity to divert up to 50 million cubic metres of water a day from the city.

Flooding in Nakhon Ratchasima has continued to wreak havoc although efforts have been made to divert waters from flood-hit districts through Chalerm Phrakiat and Chakkarat districts to the Mekong River bordering Ubon Ratchathani.

Although an estimated 400 million cubic metres of water was being released from the spillway of the overflowing Lam Phra Phloeng reservoir, this would not increase flood levels in the two districts as water was being diverted at a rate of 400 cubic metres a second to the Moon River which flows into the Mekong River in Ubon Ratchathani's Khong Chiam district .

Mr Khunpoj said the Moon River was expected to burst its banks today and tomorrow and inundate areas in Satuk district in Buri Ram and Rasi Salai district in Si Sa Ket before reaching Ubon Ratchathani.

Residents in communities near the Moon River should prepare for rising waters, he said.

Nakhon Ratchasima governor Rapee Pongbuppakit said 24 of the province's 32 districts had been flooded. More than 200,000 residents had been affected and about 470,000 rai of land damaged.

The Education Ministry said buildings and equipment at 112 schools and educational institutes in Nakhon Ratchasima had been damaged. Urgent repairs were being made to ensure the schools could open for the new semester in 12 days.

Flooding has also begun to affect areas in other northeastern provinces.

You can read the full story here: http://bit.ly/9ldpL4

inevitable – certain to happen ที่เลี่ยงไม่ได้
basin – a large area of land whose surface water all flows into a particular river or lake ลุ่มน้ำ
brace – to get ready for something unpleasant เตรียม
deluge – a sudden, very heavy rainfall or a sudden flow of a large amount of water ฝนตกหนัก น้ำปริมาณมาก
(on) alert – ready to deal with a dangerous situation เตรียมพร้อม อย่างเต็มที่
trigger – to cause กระตุ้น
overflow – (of a river or body of water)  flooding the land next to it การไหลล้น
vulnerable – easily damaged or harmed ซึ่งถูกทำลายได้ง่าย
irrigation – the process of bringing water to land through a system of pipes, ditches, etc. in order to make crops grow ระบบชลประทาน
vast – extremely large in area, size, amount, etc.  กว้างใหญ่, มหาศาล
drain – to get rid of the water in an area of land (noun form is drainage)  ระบายออก
high tide – the period of the day where the natural rise of the seawater near the shore is the highest น้ำขึ้น (an unusually high tide is a king tide)
hamper – to stop someone or something from making progress or developing; to hinder ขัดขวาง, เป็นอุปสรรค
minimise – to reduce something harmful or unpleasant to the smallest amount or degree ลดให้เหลือน้อยที่สุด
impact – an effect or influence  ผลกระทบ
capacity – the ability to do a particular thing ความสามารถ,สมรรถภาพ
divert – to cause something to change direction เบนเส้นทางเดินน้ำ, เปลี่ยนเส้นทางเดินน้ำ
wreak havoc – to create great disorder and confusion ทำลาย
crisis - a situation that has reached and extremely difficult or dangerous point ช่วงวิกฤต
recede – to move back; to move further away into the distance; subside ลดลง, ถอยหลัง
estimate – to say what you think an amount or value will be, either by guessing or by using available information to calculate it โดยประมาณ
release – to allow a substance to flow out from somewhere ปล่อย
spillway – a structure used to provide for the controlled release of flows from a dam or dyke into a downstream area ทางน้ำล้น
reservoir – a natural or artificial lake where water is stored อ่างเก็บน้ำ
burst its banks – (of a river) – to flood; to have water go over the sides ล้นตลิ่ง
inundate – to flood; to submerge ท่วม, ทำให้จมลงใต้น้ำ
residents – people who live in a particular area ประชาชนที่อาศัยในท้องที่
community –  the people who live in an area ชุมชน
urgent – needing to be dealt with immediately เร่งด่วน
semester – one of the two periods that a school year is divided into in some countries ภาคการศึกษา

The Bangkok Post is responsible for much of the news presented on NBT Channel 11. Here is the section of this mornings broadcast which dealt with the floods: