The situation has improved in the northernmost areas of the flood zone but worsened downstream nearer Bangkok. 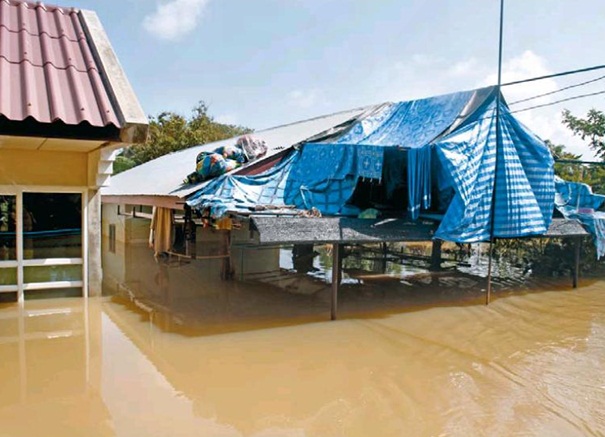 Houses in Ban Takhudkhon, alongside the Mun River in Chalerm Phrakiat district of Nakhon Ratchasima, are still two to three metres under water. Most families have taken refuge on higher ground. SAROT MEKSOPHAWANNAKUL

Flood walls breached in nearby provinces

A massive volume of water from the North has broken through temporary dykes in provinces located immediately upstream of Bangkok.

Flood waters in the Northeast were also surging downstream along the Mun River yesterday.

Thirty-one provinces in the country have been affected by floods this month and parts of 28 remain under water.

Flooding has affected more than 2.4 million people and damaged more than 3,200 square kilometres of farmland nationwide.

The Highways Department reported yesterday that 24 highways had been rendered impassable by flooding in nine provinces, most of them in Nakhon Ratchasima and Lop Buri.

Floods were subsiding in Chaiyaphum, and the province’s governor said he expected flooding to come to an end in two days.

Some 3,000 relief kits provided under the auspices of His Majesty the King were distributed to families there yesterday.

Water which had flowed into the Mun River from Nakhon Ratchasima and Chaiyaphum reached Buri Ram yesterday.

The water level had risen by 30cm to 50cm a day at the weekend and had begun to overflow into Buri Ram’s Khu Muang district.

Irrigation authorities reported that the level of the Chao Phraya in Ayutthaya was rising by 10cm to 15cm daily and was expected to continue to do so until Thursday.

In Suphan Buri, Doembang Nangbuat district was inundated as flood walls collapsed in many areas.

Krasiaw Dam in Suphan Buri’s Dan Chang district overflowed and excessive water came in from Uthai Thani province where floods had reached a depth of 50cm in Muang district.

In the lower Northeast, floodwaters were slowly moving from Pak Thong Chai, Muang and Phimai districts in Nakhon Ratchasima.

Maharat Hospital in Muang district was set to resume services for outpatients today after being closed for a week.

flow – a movement of water การไหล
surge – to increase very quickly เพิ่มขึ้นอย่างรวดเร็ว
breach – to break through something ทำให้แตก
massive – very large ใหญ่มหาศาล
volume – an amount of something ปริมาณ
temporary – done or used for only a limited period of time ชั่วคราว
dyke – a wall built to prevent the sea or a river from covering an area, or a channel dug to take water away from an area เขื่อนกั้นน้ำ
immediately – with no one or nothing between
upstream –along a river, in the opposite direction to which the river is flowing ต้นน้ำ
downstream – in the direction that a river or stream is flowing ตามกระแสน้ำ nationwide – throughout a whole country  ทั่วทั้งประเทศ
rendered – made to be ถูกทำให้
impassable – of a road or path that cannot be travelled on because it is blocked or because of bad weather conditions  ซึ่งผ่านไปไม่ได้
subside – to sink to a lower level; to go back; to recede ลดลง
relief kit – survival kit; a box or container containing things that you need in order to stay alive if you are in a difficult or dangerous situation in which you are unable to get help
under the auspices – with the help and support of a particular person or organisation การอุปถัมภ์,ความอุปการะ
distribution – to give something out to many different places  แจกจ่าย
level – the amount of liquid that there is in a container, which can be seen by how high the liquid is ระดับ
overflow – (of a river or body of water)  flooding the land next to it การไหลล้นdeluge – a sudden, very heavy rainfall or a sudden flow of a large amount of water ฝนตกหนัก น้ำปริมาณมาก
stretch – a continuous area of land or water; lengths or areas of something like a road, water or land
paddy fields – fields planted with rice growing in water นาข้าว
irrigation – the process of bringing water to land through a system of pipes, ditches, etc. in order to make crops grow ระบบชลประทาน
authorities – people who have the power to make decisions or enforce the law เจ้าหน้าที่ผู้มีอำนาจ
inundate – to flood; to submerge ท่วม, ทำให้จมลงใต้น้ำ
collapse – to suddenly fall down ล้มลง
excessive – much greater than is usual; too much of something   มากเกินปริมาณที่พอดี
depth – the distance down below the top surface of something ความลึก
resume – to begin again after stopping for a period of time ดำเนินต่อไปใหม่, กลับมาอีกครั้ง
outpatient – someone who receives medical treatment at a hospital, but who does not stay there for the night คนไข้นอก