Rice sales from government stockpiles have been halted on fears of a shortage. 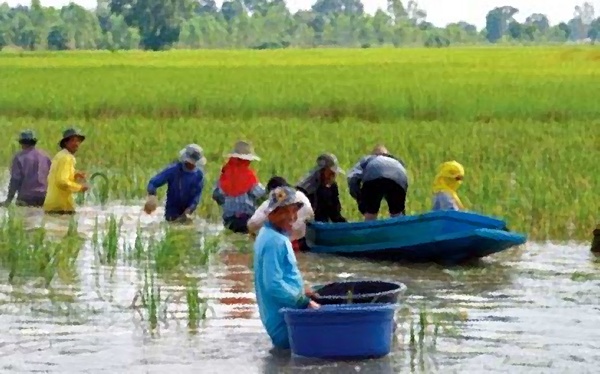 The photo above shows farm workers in Buri Ram salvaging rice from the floods.

Flooding in northern, northeastern and central Thailand is estimated to have cost the manufacturing sector 106.41 million baht in damages, with 259 factories in 32 provinces affected.

The flooding has also prompted the government to halt sales of rice from state stockpiles because of concern about a local shortage ... The government has about 2 million tonnes or rice in its stocks, down from 6 million early in the year.
Preliminary estimates by the Agriculture Ministry show the floods damaged 5.3 million rai, most of it rice land.

Output from the main rice crop may decline by 1.5 million tonnes from 23 million last year...

Flooding has also cut fresh vegetable supplies by about 30 per cent, pushing up prices by 10-20 per cent.

However, the Internal Trade Department said the prices were still lower than during the vegetarian festival earlier this month, when prices typically rise by 30-40 per cent on high demand.

Kasikorn Research Center forecast total flood-related damages between 9.1 billion and 24 billion baht, trimming GDP growth this year by 0.1 to 0.2 points to between 6.8 per cent and 6.9 per cent.

Witoon Simachokedee, permanent secretary for the Industry Ministry, said its survey of ministry offices in 75 provinces showed 165 factories affected by the floods, 51 small and medium enterprises and 16 Otop producers.

...The sugar industry appears to have been spared, though, with only 16,000 rai of cane plantation areas damaged out of a nationwide total of 6 million.

Mr Witoon said cane crushing for the next season would start on schedule in December...

... it could take months for some of the province's affected factories to resume normal operations

Currently most factories are not operating at full capacity. Some don't even have any workers at all, as the water has just subsided for two days...

spared - the bad thing did not happen to them
stockpiles - large amounts of something stored for future use กองสินค้าในโกดัง
stocks - same as "stockpiles"
halt - to stop หยุด, หยุดนิ่ง
shortage - when there is not enough of something การขาดแคลน
salvage - rescue, recover, save, to save things from a building or area that has been damaged (example: salvage personal belongings from the home after the earthquake) การกู้ภัย
put on hold - stopped temporarily, stopped for a period of time (will start again at some in the future)
sector - a part of the economy (public sector = government, private sector = all businesses, household sector = families and consumers, banking sector,...) ภาคเศรษฐกิจของประเทศ (See Wikipedia)
manufacturing sector - all the factories in the economy producing goods for sale within the country or for export
prompted - caused to take some action
state - government รัฐ
concern - a worry ความกังวล
local - in this country preliminary - not final
estimates - guesses or expert calculations of what the size, value, amount, cost, etc. of something might be การประมาณค่า
preliminary estimates - a guess of what an amount, before the final calculation has been made
output - the amount produced by some business (examples: output of a factory, crop output of a farmer)
decline - decrease

typically - usually; normally อย่างเป็นแบบฉบับ
demand - the need and desire to buy goods and services by households and businesses
forecast - what experts believe will happen in the future based on information available now พยากรณ์
GDP - Gross Domestic Product, a measure of economic activity in a country, the value of the country's output of goods and services. GDP is defined roughly as: GDP = Household Consumption + Business Investment + Change in Inventories  + (Government Spending - Taxes)  + (Exports - Imports) (See Economist Glossary)

Kasikorn Research Center - Thailand's top private economic research center (See website)
permanent - happening or existing for a long time or for all time in the future ถาวร
survey - gathering information about what people think about different subjects (public opionion) by asking large numbers of people questions and counting their answers, and then using statistics, graphs, and tables to present results (See Wikipedia) การสำรวจ
ministry - a government department dealing with an area of activity กระทรวง
enterprises - companies
small and medium-sized enterprises - SMEs, companies with revenue, assets, or employees below a certain level, in Thailand 200 million in assets is the limit (See Wikipedia)
OTOP (One Tambon One Product) - a program to promote rural Thai businesses both domestically and internationally, started by former Thai Prime Minister Thaksin, the program modelled itself after Japan's successful One Village One Product (OVOP) program, strove for improvements in local product quality and marketing, the kinds of products promoted included local food products, handicrafts, clothes, accessories, and household items (See Wikipedia)

plantation - a large farm where crops such as tea, coffee, cotton, sugar or, in this case, trees, are grown ไร่ นาขนาดใหญ่
nationwide - throughout a whole country ทั่วทั้งประเทศ
cane - sugar cane, the tall plant crop that sugar is made from (See Wikipedia)
crush - press and push something very hard so that it breaks into small pieces กด, บีบอัด
resume - to begin again after stopping for a period of time ดำเนินต่อไปใหม่, กลับมาอีกครั้ง
resume normal operations - when a business or organization starts working as it usually does every day (after an emergency or disruption)
capacity - the amount of something that can be produced ความสามารถในการ (ผลิต)
operating at full capacity - when a factory is producing the largest amount that it can produce (must make a bigger factory to produce any more)
subside - go down (after rising)
water subsided - the water went down (after rising)