With industrial projects suspended at Map Ta Phut recently, the city of Dawei in Burma near Southern Thailand is looking more attractive for heavy industry projects. 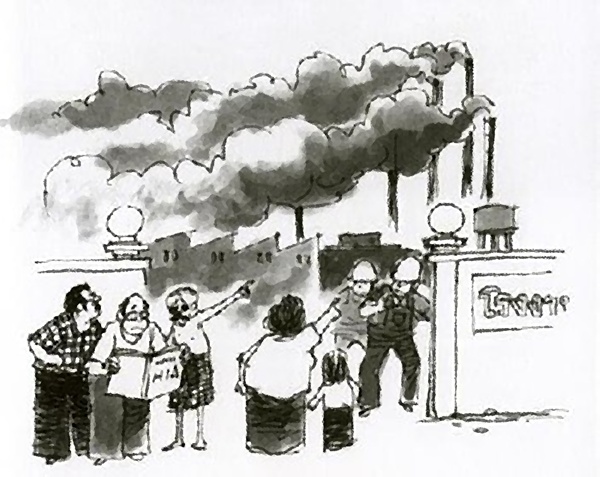 This created a major impasse in Thailand's industrial development.

The problems appeared to be ironed out for now, but some anticipate similar problems to arise again in the future.

One option is to shift polluting heavy industry to Burma.

Dawei on the Isthmus of Kra is the logical choice since the Bay of Bengal on the Burma side and the Gulf of Thailand on the Thai are closest at this point.

However, It is not entirely clear why Thai authorities cannot emulate successful environmental regulation of heavy industry in other countries and thereby keep these projects in Thailand.

The business plans for Burma being made by the two Thai companies Amata Corporation and Siam City Cement are discussed in two additional articles in today's Bangkok Post (Read article #1 and #2).

Thai heavy industry is likely to shift to industrial estates in Burma's western coastal city of Dawei instead of setting up facilities in southern Thailand or Map Ta Phut, warns the government's economic think-tank.

To prepare for massive development, Thailand needs to construct infrastructure to link Dawei to the Eastern Seaboard in Chon Buri.

The Burmese government is promoting the development of a huge port and industrial estate development in Dawei (Tavoy), for which SET-listed Italian Thai Development Plc will be a major contractor. The first-phase contract that ITD has signed for the 10-year project is worth an estimated US$8 billion. The entire project could be worth $58 billion or more.

Dawei isn't much today, but port development could be 10 times that of Laem Chabang in Thailand.

Companies planning to invest in a Dawei industrial estate include PTT Plc, Siam Cement Group and the upstream complex of a Japanese steel company.

Arkhom Termpitthayapaisith, secretary-general of the National Economic and Social Development Board, said the shift to Burma would be a response to environmental issues both in Map Ta Phut and southern Thailand.

It is quite clear, he said, that more heavy industry cannot be located in Map Ta Phut in Rayong, while the agency's survey showed residents in the South disagreed with the establishment of an oil refinery and petrochemical complex.

Thai governments for 20 years have been talking about a southern landbridge spanning Songkhla and Nakhon Si Thammarat as an industrial development area and location for petrochemical complexes, but the talk has come to nothing.

Now the focus has shifted to Burma, and the Transport Ministry will study building a new road link from Dawei via Ban Phunamron in Kanchanaburi to the Eastern Seaboard and Cambodia.

Mr Arkhom said Prime Minister Abhisit Vejjajiva also sought the support of the Chinese government for the Dawei project on the sidelines of the G20 meetings last Friday, encouraging Chinese companies to set up projects in an industrial estate planned by Thailand's Amata Corp.

China also plans to build a rail link from southern China to Dawei to provide another route to the sea.

It is predicted Dawei's wide-ranging infrastructure project will strengthen Thai competitiveness with improved access to raw materials such as natural gas and ore for the steel industry from the Middle East and South Africa.

He expects Thai transport costs would decrease because shippers will no longer need to use the Malacca Strait.

The Transport Ministry, meanwhile, is expected to adjust its 10-billion-baht plan for the Pak Bara deep-sea port in Satun province to make it a multi-purpose port serving both goods transport and tourism.

Pak Bara's status as a gateway for shipping to India and the Middle East is expected to diminish after the Dawei project is created.

heavy industry - more capital intensive industries with big plants and factories, requiring greater and more expensive facilities and resources, examples are chemicals, oil refining iron production, car manufacturing, and ship building (See Wikipedia) อุตสาหกรรมหนัก เช่น ภาคการผลิตเหล็กกล้า อุตสาหกรรมการประกอบรถยนต์  การกลั่นน้ำมัน relocation - moving to a new place, changing location
suspended - stopped temporarily, stopped for a period of time but will reopen in the future
Administrative Court - the court which deals with disputes between the private sector and government agencies ศาลปกครอง
shut down - close, stop an activity or project
impasse - a problem that makes it difficult to move forward and make progress or advance in a project
emulate - try be like another person, try to follow their good example เลียนแบบ, พยายามเลียนแบบ, พยายามจะให้เท่าเทียม
environmental regulation - rules and laws that the government makes to protect the environment and punish those who pollute (See Wikipedia on environmental law)
ironed out - when a problem has been solved
anticipate - feel that something is going to happen in the future
option - one choice (among many possible choices)
appeal - liking something
the appeal of X to Y - the fact and reasons why Y likes X lose appeal - people do not like anymore, people stop liking it

shift - to transfer; to move from one place to another เคลื่อนย้าย
facilities - the buildings, equipment and services provided for a particular purpose สิ่งอำนวยความสะดวก
think-tank - an organisation that does  policy-related research, gives policy suggestions and advice (See Wikipedia)

massive - very large in size, amount or numberใหญ่โต,  มหาศาล
development - real estate development, improving and adding value to land by building homes, factories or some other buildings on the land

infrastructure - basic systems and services such as transportation, electricity, and water that are necessary for a country to run smoothly สาธารณูปโภค
link - to connect เชื่อม
Eastern Seaboard -  a heavily industrialized area of Thailand stretching from Bangkok south through Chonburi, Sri Racha, and Pattaya to Rayong
port - an area of water where ships stop, including the buildings around it ท่าเรือ

Italian-Thai Development - Thailand's largest construction company founded in 1954 (See website)
contractor - a person or company whose job is to do work for another person, organisation, company, etc. ผู้รับเหมา
contract - a written (or oral) agreement that is legally binding สัญญา
estimated - say what you think some amount is (by guessing or using available information to calculate it) โดยประมาณ

Laem Chabang port - port near Bangkok on Eastern Seaboard with facilities for container ships
container ships - cargo ships that carry all of their load in truck-size containers (See Wikipedia on container ship and containerization)
upstream - at an early stage in the process of producing a product for sale (early in the supply chain)
complex - a large facility with many parts
facility - a collection of buildings, machines and equipment for some special purpose, such as: manufacturing, science research, waste treatment, etc...
National Economic and Social Development Board (NESDB, Sa-pa-pat) - Thai government planning agency for economic development, creates five year plans with an agenda of: 1. Alleviation of Poverty and Income Distribution problems, 2. Enhancing Thailand’s Competitiveness, 3. Promoting Social Capital Development, 4. Promoting Sustainable Development (See Wikipedia)
issues - an important subect that people are discussing and debating about ประเด็น

clear - easy to understand
survey - gathering information about what people think about different subjects (public opinion) by asking large numbers of people questions and counting their answers, and then using statistics, graphs, and tables to present results (See Wikipedia) การสำรวจความเห็น
residents - people who live in an area ผู้อยู่อาศัย
refinery - a factory that makes pr purrifies some chemical (example: oil refinery)
petrochemical - chemicals made from oil ปิโตรเคมี
span - extend over, stretch over, covering a large stretch of land ยืดขยาย, แผ่ทั่วปริภูมิ
focus - the main thing it is concerned with ให้ความสำคัญ

support - help, by giving money, for example สนับสนุน
sidelines - outside of the main event (originally: on the side of a sports match, during a football match, for example)
on the sidelines of - something was discussed or done unofficially, outside of the normal meeting
G20 -  "...group of finance ministers and central bank governors from 20 economies: 19 countries plus the European Union, which is represented ...the G-20 economies comprise 85%[4] of global gross national product, 80% of world trade (including EU intra-trade) and two-thirds of the world population (See Wikipedia and list of countries)

Amata Corp - Thailand's leading developer and manager of industrial estates (See Google Finance, website and history )
provide - to give someone something that they want or need
route - the way that planes, buses, trains, or ships travel regularly เส้นทางของรถ เรือ เครื่องบิน,etc.
X predicted Y - X said that they believed Y would happen in the future
wide-ranging - will cover many different things, activities (here: will include many different commercial uses)
competitiveness - how well a business can do compared to other firms (does it have lower price or higher quality?) การแข่งขัน
access - the right or opportunity to have or use something ได้รับสิทธิ์หรือโอกาสในการใช้
ore - material from the ground that metal is made from (example: iron ore) แร่, สินแร่
raw - materials in their natural state before being processed or used in manufacturing
raw materials - materials such as metals and plastics that are used to produce goods in factories  วัตถุดิบ
natural gas - a fuel in the form of a gas used for heating, cooking, and to generate electricity (power) in gas and steam turbines (See Wikipedia)

transport - to move people or things from one place to another ขนส่ง
Malacca Strait - the narrow waterway past Singapore that ships from Thailand and Asia have to pass through to get to India, the Middle East, and Europe (See Wikipedia) ช่องแคบมะละกา
expected - believe will happen คาดว่า (จะเกิดขึ้น)
adjust - to change something slightly, especially to make it more correct, effective, or suitable ปรับ
deep sea port - a landing place for very large ships ท่าเรือน้ำลึก
multi-purpose - can be used for many different kinds of activities, has many different uses
status - the state of affairs at a particular time สถานะ
shipping - the transport of goods especially on ships
diminish - to gradually become less ลดลง, อ่อนแรง