Everyone now knows Granny Sombat's dark secret, but did she really do anything wrong? 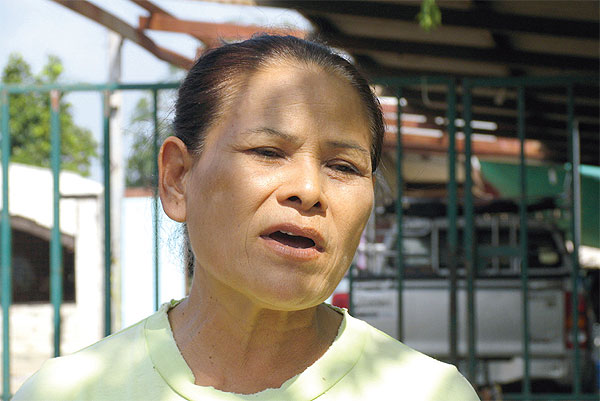 Sombat Sinothok: ‘‘If I didn’t collect these kids, then who would?’’ ARTHIT KHWANKHOM

The Bang Phra community in Nakhon Chaisi district is in shock after hearing of a dark and sinister secret surrounding one of the area's most respected families.

Sombat Sinothok, 61, has for years looked every bit a typical grandmother with many children by her side.

Community members understood she earned her living by buying unwanted low-quality coconuts from the local growers, breaking them into husks, shells and flesh before reselling them to different producers of coconut products.

That was until the arrest of her daughter, Lanchakorn Jantamanas, 33, made the headlines last week.

Police said Ms Lanchakorn confessed to being involved in events leading to the horrific discovery of more than 2,000 aborted foetuses hidden at Wat Phai Ngern Chotanaram in Bang Kholaem district.

Even more shocking was the revelation that four children, raised by Ms Sombat and thought to be her own biological grandchildren, have been identified as babies who Ms Lanchakorn claims survived illegal abortions and were brought home to her mother.

Police said both Ms Sombat and Ms Lanchakorn had conceded that they had bribed local government officials to falsify birth documents.

"I was totally shocked thinking this could not be true," said Wiphawan Pornphisarnsap, 54, a school teacher who supervised a 9-year-old, the oldest child, with Ms Sombat.

Thanit Saranetr, 50, another teacher who has been very close to the child, said she was stunned by the news.

Ms Thanit supervised the boy during the year he studied at Pathom1 level and said the boy struggled to overcome physical and learning problems.

But her shock had quickly been replaced with sympathy for both the child and his family. Ms Thanit said the family had always taken good care of him.

Ms Sombat's natural son, Chen, was always by the child's side even at school at the time when the boy suffered from an eating disorder and learning difficulties, the teacher said. The boy has become a talented student in the past three years, excelling at painting and Thai language skills.

Both his teachers said they could confirm that the child's family had brought him up well and made him a happy child.

"We can't agree with the idea to separate him and the other three kids from their present family," Ms Thanit said.

"If that really is to happen, we, his teachers, will have to do something."

Suphadet "Nong Keng" Chueachart,9, a Pathom 3 grader, the child's classmate, said: "Yeah, we all now know he could have been one of those thousands of carcasses in the news ... but no one teases him about that."

Prakhong Toboontha, a village headman in tambon Bang Phra, said: "Of course, we were very much shocked to know the truth, but beyond that we feel really, really sorry for them."

News about Ms Sombat's care for the four children – and a lot of negative rumours about it – spread like wildfire. The most common was that Ms Sombat relied on the "sin" money from her daughter who earned a living by transporting unborn foetuses dumped by illegal abortion clinics to the temple and occasionally herself performed an illegal abortion for customers.

Some villagers, after hearing about Ms Lanchakorn's job from media reports, could not help but wonder if a fire that completely destroyed a 5 million baht Thai pavilion-style wooden house belonging to the Sinothok family about two years ago was "karma".

Ms Sombat insisted she earned almost 100,000 baht a month from her coconut business which was enough to take care of the four children and hire four staff.

"It's no way to redeem their sins and I can assure you that I raise these kids because I love to," she said in response to cynical suggestions that she looked after the children out of guilt.

"Like the way I treat these unwanted coconuts, if I didn't collect these kids, then who would?" asked Ms Sombat who risks facing criminal charges and losing custody of the four adopted children.

expose – to make known; to uncover เปิดเผย
foetus –a young human being or animal before birth and after the organs have started to develop ทารกในครรภ์, ตัวอ่อนในครรภ์
community –  the people who live in an area ชุมชน
sinister – threatening to do harm or to do something evil เป็นลางร้าย,
surround – to be everywhere around something ล้อมรอบ
respected – admired by many people for your qualities or achievements   ที่เคารพ
typical – like most people or things of the same type  เป็นตัวอย่าง,เป็นแบบฉบับ
local – in or related to the area that you live, or to the particular area that you are talking about  ท้องถิ่น
husk – a dry outer covering แกลบ, เปลือก
flesh – the soft part of people’s, animals’  or plants' bodies that consists mostly of muscle and fat เนื้อ
arrest – (of the police) taking someone to a police station because they are believed to have committed a crime การจับกุม
headline – the title of a newspaper story that is printed in large letters ข่าวพาดหัว
confess – to admit that you have committed a crime  สารภาพผิด
horrific – so shocking that it upsets you น่าขนลุก
aborted – (of a developing baby) removed from a woman’s body, so that it is not born alive ทำแท้ง
revelation – a surprising piece of information การเปิดเผย
identify – to specify  ระบุ
survive – to continue to live มีชีวิตรอด
illegal – against the law  ผิดกฎหมาย
abortion – a medical operation in which a developing baby is removed from a woman’s body so that it is not born alive การทำแท้ง
concede – to admit that something is true ยอมรับว่าถูก
bribe – to give money or presents to someone so that they will help you by doing something dishonest or illegal ติดสินบน
falsify – to change something, such as a document, in order to deceive people ปลอมแปลง
document – a paper or set of papers with written or printed information, especially of an official type  เอกสาร
supervise – to be in charge of an activity and to check that everything is being done correctly  ดูแล ควบคุม
stunned – very shocked or surprised  มึน, ตกตะลึง, งงงัน
struggle – to try hard to do something that you find very difficult พยายาม
overcome – to succeed in controlling or dealing with something ต่อสู้อุปสรรคจนสำเร็จสำมารถดำเนินการต่อไปได้
replace – to put something new in place of something old  นำมาใช้แทน
sympathy – a natural feeling of kindness and understanding that you have for someone who is experiencing something very unpleasant ความเห็นอกเห็นใจ
suffer – to experience something very unpleasant or painful ประสบ
disorder – an illness or medical condition ความผิดปกติทางกายหรือใจ
talented – very good at something ความสามารถพิเศษ
excel – to do something extremely well ทำดีเยี่ยม
bring up – to raise; to take care of children while they are growing up  เลี้ยงดู
separate – to keep or put apart แยก
carcass – the body of a dead animal ซาก
tease –  to say something to someone in order to have fun by embarrassing or annoying them slightly in either a friendly or an unkind way หยอกล้อ,  ยั่วเย้า
negative – bad ที่เป็นด้านลบ
rumour – a piece of information, or a story, that people talk about, but that may not be true ข่าวลือ
spread – to (cause to) cover, reach or have an effect on a wider or increasing area or number of people กระจายไปทั่ว
spread like wildfire – to spread very quickly  กระจายไปทั่วอย่างรวดเร็ว
rely on – to need something in order to continue living, existing, or operating อาศัย, พึ่งพาอาศัย
sin – an action, thought, or way of behaving that is wrong according to religious laws บาป
occasionally – sometimes, but not frequently or regularly บางครั้งบางคราว
media – newspapers, television, radio, etc. สื่อ
wonder – to think about something because you want to know more facts or details about it สงสัย
karma – a belief in Hinduism and Buddhism that the way in which you behaved in past lives affects your present life, and the way in which you behave in this life will affect your future lives กรรม
insist – to keep saying very firmly that something is true ยืนกราน ยืนยัน
redeem – to do something good because you have behaved badly, so that people will think you are a good person again ไถ่บาป
assure – to tell something that something is true or will definitely happen ให้ความมั่นใจ, ยืนยัน
cynical – believing that people care only about themselves and are not sincere or honest ถากถาง,ดูถูก,เหยียดหยาม
suggestion – the possibility that something is true, or evidence showing that something may be true ข้อชวนคิด
guilt – a feeling of being ashamed and sorry because you have done something wrong ความรู้สึกผิด
risk – to cause someone or something to be in a dangerous situation เสี่ยงอันตราย
face – to (likely) have to deal with a problem เผชิญ, พบ, เจอ
charge – an official statement accusing someone of committing a crime ข้อหา
custody –  the legal right to look after a child สิทธิในการดูแลเด็ก
adopt – to take someone else’s child into your family and legally make him or her your own child รับเลี้ยงเป็นลูก