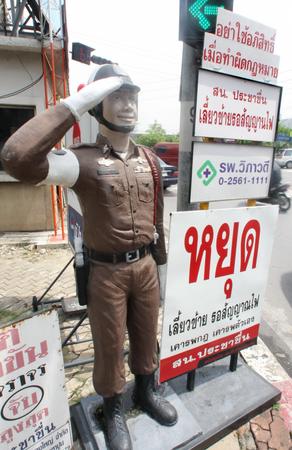 Many countries also have regional (or provincial) and local police forces accountable to elected local governments.

Community policing is another approach to making local law enforcement meet the needs of the community.

The photo above is of the police dummy described in the article.

Cooperation is key to success: A new policing policy will see officers integrated in communities by Wassayos Ngamkham

Money may help you build your dream home, but not a dream society where criminals are extinct. To achieve that, Thailand is trialling a new policing strategy.

The Central Investigation Bureau (CIB) is banking on a philosophy called "community policing" in an attempt to create crime-free communities nationwide.

CIB commander Pongpat Chayapan said working methods adopted from a policing theory called Police Community Relations (PCR), which has been conducted over many years, were wrong and could not reduce crime.

PCR calls for police to be sent to perform recreational activities, such as playing music, in a community suspected of harbouring drug dealers or other criminals in the hope of building trusting relationships and receiving help from community members.

But by doing only that, police did not really hear residents' concerns, Pol Lt Gen Pongpat said. When they left the community, the problems still existed.

Pol Lt Gen Pongpat said he had introduced the theory of community policing when he worked at Bangkok's Bang Khun Non station more than 10 years ago.

Police would live in a community, hear people's problems and urge people to share their thoughts and solve their problems themselves.

"I could say the results were successful because illegal drugs have been gone from the community [in Bang Khun Non] ever since," Pol Lt Gen Pongpat said of the success story he has dubbed "the Bang Khun Non Model."

The same model is now being used in the Crime Suppression Division (CSD), an agency under the CIB.

The CSD is rebuilding its reputation after it was shattered by a drug raid on the wrong house in Ayutthaya and the suspected involvement of officers in the disappearance of lawyer Somchai Neelaphaijit, Pol Lt Gen Pongpat said.

CSD commanders will select a community in each district of Bangkok and 10 others in each province in a strategy aimed at better integrating law enforcement officers in local areas.

Two police would be sent to a rented house in each community. They might not have to stay overnight but they must show up at the house every day.

"The officers who enter the community will appear standing at the same spot and at the same time every day," Pol Lt Gen Pongpat said. "They will have to try to make friends with the residents."

He said people might not dare to talk to the police during the first few days of their stay. However, after a while, the activities they do, such as hiring a local person to do their laundry, taking sick people to hospital or helping repair damaged infrastructure, would enable them to "sit at the heart" of the community.

Progress will be evaluated after three months. If the residents appear to trust the police who are staying in their neighbourhood, an assembly will be called to hear about the community's problems. At the meeting, residents will be urged to propose their own solutions to problems. Pol Lt Gen Pongpat said people who live with social problems are likely to provide better solutions than those who do not.

He also plans to place dummy police officers - all nicknamed Pol Sgt Choey - in neighbourhoods under his community policing scheme. He said the dummies could help indicate the effectiveness of law enforcement and how the public viewed the police. If a dummy was destroyed or defaced with insulting graffiti, it might indicate how many law-breakers were living in that area

He said the Pol Sgt Choey dummies were a perfect fit with his community policing policy.

(Source: Cooperation is key to success, A new policing policy will see officers integrated in communities, 22/11/2010, Wassayos Ngamkham, link)
police - the organization that checks whether people are obeying the law and tries to catch people who break laws (criminals) (See Wikipedia) police force - all the people (police officers) serving in the police for a given area (nation, province, town, city) nationwide - including the whole country ทั่วประเทศ
national - same as "nationwide" regional - in one large part of a country such as in one province
local - the small area that you live in ท้องถิ่น accountable - in a situation where people have the right to criticize your work if they feel it could be better and ask you why something happened ที่สามารถอธิบายได้ approach - one way of doing things, one way of trying to solve problems
enforcement - making sure a law is obeyed and punishing people if it is not obeyed บังคับใช้กฎหมาย
law enforcement officers - police
dummy - an object made to look like a real human, usually used in stores to display clothes ของที่ทำเลียนแบบของจริง

community - the people living in one local area ชุมชน
community policing - neighborhood policing, a policing strategy and philosophy based on the notion that community interaction and support can help control crime and reduce fear, with community members helping to identify suspects, detain vandals and bring problems to the attention of police" (See Wikipedia)
Police Community Relations (PCR) - the guiding philosophy of building strong relations of trust between a community and the police, not just relying on fear (See presentation)

dream home - your ideal house (the house you would like to have, if money was not a problem)
key to success - a important action that lead to success
policy - a plan of action to guide decisions and achieve outcomes (See Wikipedia) นโยบาย
officers -police officer (note: all police are called "officers" , not just high-ranking police)
integrated - when two things are combined and work together as a unified whole, combined so that they work well together, combined so that they operate as one unit, combining things of different types in one effective system ที่รวมเข้าด้วยกัน
extinct - all of a group is dead, does not exist anymore, vanished completely สูญพันธุ์,ไม่มีเหลืออยู่
trial - a test of something new to see if it works
strategy - a plan to achieve long term goals ('strategy' gives the big picture, 'tactics' the details)

banking on - relying on
X banking on Y to Z - X has chosen action Y in order to achieve goal (strategy Y may or may not work)
commander - a police offer of high rank ผู้บังคับบัญชา
working methods - ways of doing work tasks; the procedures, guidelines and rules that people follow when they are performing their work tasks
adopted  - start using something new (for the first time)
theory - one or more ideas that explain how or why something happens สมมติฐาน

recreation (noun) - leisure activities, things people do in their free time for amusement and entertainment สันทนาการ, การละเล่น
recreational activities - same as "recreation"
suspected - people believe that they might have done something wrong, but not yet proven เป็นที่สงสัย
harbouring - keeping a criminal or law breaker at your house and taking care of them
drug dealer - a person who sells illegal drugs
trust - believing in someone, believing that they will do as promised, having confidence in each other so you can work together effectively ความเชื่อมั่น
building trusting relationships - knowing people better so that have confidence in them and believe them
concerns - worries ความกังวล

station - (here: police station) in general: a place where some activity takes place (for example: power station, police station, fire station, space station, way station)
urge - to advise someone very strongly about what action or attitude they should take วิงวอน ย้ำเตือน
share their thoughts - when people talk together so that they know what other people are thinking
results - what is produced in the end by an activity or task
illegal - against the law ผิดกฎหมาย, นอกกฎหมาย
dubbed - given a name ตั้งฉายา, ตั้งชื่อเล่นให้

reputation - the opinion that people have about how good or bad someone or something is ความนับหน้าถือตา, ที่มีชื่อเสียง ที่เป็นที่รู้จัก
shattered - badly damaged or destroyed ที่เสียหายป่นปี้
raid - to use force to suddenly enter a place and arrest people or look for illegal drugs or other illegal items บุกเข้าจับ
show up - appear, be at a place
spot - to see or notice
residents - people who live in a particular place or area ชาวบ้านในบริเวณ ผู้อาศัยในบริเวณ ราษฎรในบริเวณนั้น

dare to Y - brave enough to do act Y กล้าที่จะ
after a while - after a periond of time has passed
hiring - giving a person a job การว่าจ้าง
laundry - a business which washes clothes, sheets, etc. for customers กิจกรรมซักรีดเสื้อผ้า
repair - to fix something that is broken or damaged ซ่อมบำรุง
infrastructure - the high-cost facilities that everyone in the economy shares (water, roads, electricity, trains) สาธารณูปโภค (See Google Definitions)
enable - to make someone able to do something, or to make something possible ทำให้เป็นไปได้
progress - improvement, when a situation improves or a project achieves its goals  ความก้าวหน้า, ความเจริญ evaluate progress - look closely at a situation (analyze) to see if the situation has improved

assembly - when a large number of people come together at one place for a special event
meeting - when a group of people come together to discuss issues and make decisions การประชุม
urged - encouraged people to do, tried to get them to do, advised someone very strongly about what action should be taken วิงวอน
provide - to give someone something that they want or need

nickname (noun) - the short name that a person is called by their friends ชื่อเล่น
scheme - a plan that is developed by a government or large organisation in order to provide a particular service for people แผนการ โครงการ
effectiveness - working well and producing the results intended
deface - damage, deform, disfigure ทำให้เสีย, ทำให้มีรอยตำหนิ, ทำให้เสียโฉม
insulting - rude or offensive อย่างดูถูกดูแคลน
graffiti -  words and pictures drawn on walls in public places การวาดภาพหรือเขียนบนกำแพงในที่สาธารณ
fit - suitable, appropriate, proper choice for a situation or person, the best match ที่เหมาะสม, ที่สมควร
perfect fit - the most suitable choice for a person or situation, the best fit