Powerful people, even former government officials, sometimes cheat small farmers, buying their rice but never paying for it. Legal reforms to expedite these cases are necessary. 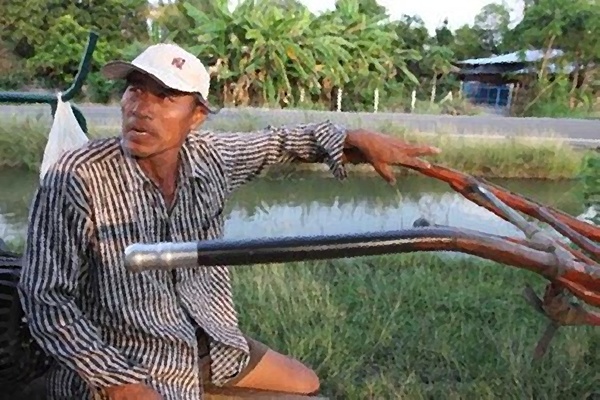 Unscrupulous business people, like a local government official in today's article, cheat other business people repeatedly because they feel they can get away with it with impunity.

Small claims courts are a common legal avenue chosen by small business people in the US when they get cheated or "ripped off" by people they trusted in their business transactions.

Small claims courts expedite small legal cases. They ensure that justice is done before the legal bill is greater than the loss suffered by the small business person in the first place.

As today's article shows, such a small, informal, speedy and inexpensive court is clearly needed for small powerless farmers and perhaps others who have been cheated.

The Justice Ministry is seeking to provide rice farmers with greater legal protection against cheating and bankruptcy suits.

Justice Minister Pirapan Salirathavibhaga said yesterday the move followed a large number of complaints from rice farmers who sought the assistance of the ministry's Department of Special Investigation (DSI).

The ministry has proposed several amendments to the Finance Ministry's laws on bankruptcy and farmland rental with the aim of placing farmers on a firmer footing in their business dealings.

Farmers who have been cheated are often unable to repay their debts and so are vulnerable to bankruptcy action.

Mr Pirapan said the case of 194 rice farmers who were together cheated of an estimated 40 million baht had sounded the alarm.

The farmers from Chai Nat, Ayutthaya and Phitsanulok said they sold their rice to buyers including Sanong Sukjai, a former chairman of a tambon administrative organisation in Chai Nat, but were never paid.

They decided to seek the help of the DSI which, along with the Justice Ministry's Rights and Liberty Protection Department, filed a lawsuit against the buyers. The provincial court in Chai Nat ruled last week in favour of the farmers but it will take months, if not years, before they see any money.

Defendants in similar cases have argued that they do not have the money to pay the farmers, resulting in further protracted wrangling.

Mr Pirapan said the Justice Ministry was working with other agencies such as the Agriculture and Agricultural Cooperatives Ministry to ease the burden on farmers.

He said there was not enough in the ministry's "justice fund" to help the farmers. The fund established to help troubled farmers has about 40 million baht in its kitty

Chamnong Ketyu, a disabled farmer based in Chai Nat, said he sold 380,000 baht worth of rice to a buyer in March but still had not received any payment.

Mr Chamnong said he had to borrow to cover his farming costs, including leasing his land and buying fertiliser and fuel.

His debts, including interest payments, had risen to 430,000 baht.

(Source: Bangkok Post, Justice Ministry comes to cheated farmers' aid, Law changes likely as complaints pile up, 23/11/2010, King-oua Laohong, link)
unscrupulous - willing to do things that are unfair, dishonest, or illegal get away with it - do something bad, but not get caught or punished impunity - freedom from any punishment for wrongdoing การไม่ต้องถูกลงโทษ, การได้รับยกเว้นจากการลงโทษ small claims courts - a special court to quickly handle and resolve legal cases seeking a small amount of money, below a certain limit (See Wikipedia) common - usual, happens often, happens everyday ที่เกิดขึ้นทุกวัน
avenue - one way or method of achieving some goal legal avenue - one way of using the law to achieve some goal ripped off - when a person has something stolen from them or when they are cheated and have money taken from them expedite - to make something happen faster and more easily, hasten, speed up  ทำให้เร็วขึ้น, จัดการให้เร็วขึ้น

cheat - tell a lie or act dishonestly to gain money, deceive โกง
aid - help; assistance given to someone ความช่วยเหลือ เงินช่วยเหลือ
complaints - when people say there is something wrong and they want it changed
provide - to give someone something that they want or need
bankruptcy - when a company has too much money and does not have enough money to pay their debts and continue in business, so the company stops doing business and its assets are sold off to pay of its debts to creditors (See Wikipedia)
suit - short form of "lawsuit"
lawsuit - a case that a court of law is asked to decide involving a disagreement between two people or organisations คดีที่อยู่ในระหว่างการฟ้องร้อง
complaint - when people say they are unhappy or angry about something (example: customer complaints about bad service)
assistance - help given to someone (same as "aid" above)

ministry - a government department dealing with an area of activity กระทรวง
proposed - suggested (but not yet chosen or decided upon)
amendments - changes to a law
aim - purpose; goal; the thing you hope to achieve by doing something เป้าหมาย,  จุดมุ่งหมาย place on a firmer footing - make their position safer and more secure (protected from being cheated)
dealings - the business or other activities that you do with a person or organisation
vulnerable - easily harmed or damaged by some event or action ซึ่งถูกทำลายได้ง่าย, ที่เปราะบาง ที่ล่อแหลมต่อการเกิดภัยภิบัติ
alarm - to cause worry or fear that something unpleasant or dangerous might happen or is happening ทำให้กลัว
sounded the alarm - showed the public that there was a bad problem

Tambon Administration Organization (TAO) - a unit of government in rural provincial Thailand (Read academic paper and Wikipedia)
filed - to take official action, e.g., to make a formal complaint ยื่นฟ้องร้อง
file a lawsuit - to formally start a legal case against someone in a court of law (to get compensation for damage they caused you) court ruling - a decision that ends a legal case and legal dispute rule in favour of Y - when the decision of a court in a court case favours side Y (either the defendant or the plaintiff)
defendant - the person against whom a legal case is brought, a person accused of wrongdoing or causing harm and damage to another จำเลย
plaintiff - someone who brings a legal case against someone else in a court of law โจทก์
protracted - lasting for a long time ที่ยืดเยื้อเป็นเวลานาน
wrangling - fighting and arguing about something
ease - to make or become less severe, difficult, unpleasant, painful, etc ทำให้ง่าย, บรรเทา
burden - a responsibility, a difficult thing that must be done, a heavy load to carry ภาระ (See glossary)

justice - when people are treated fairly and equally (See Wikipedia) ความยุติธรรม
fund - to provide money for something เงินทุน กองทุน
established - created
troubled - have problems
leasing - renting, allowing the use of something for regular payments of money
fertiliser - a natural or chemical substance which is spread on the land or given to plants, to make plants grow well ปุ๋ย (See Wikipedia)
interest payments - payments made for the use of another's money for a period of time