Savings quickly used up on entertainment and women, lacking health insurance, hospitals end up paying for their chronic illnesses. 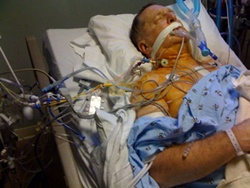 PHUKET : State hospitals in the southern province are shouldering a heavy burden for treating elderly foreigners who cannot afford to pay their medical bills.

Many retired foreigners who came to Thailand with the hope of settling down here are now struggling after spending their pensions wastefully and marrying Thai women, some of whom left them after their money ran out.

Lots of foreigners have fallen ill and been admitted to local hospitals. Their relatives back home refuse to pay for their treatment on being contacted by the embassy, Vachira Phuket Hospital's public relations centre said.

The embassies regard the matter as personal. They will provide help to their nationals only in cases of emergency or disaster.

"So we've treated these patients based on professional ethics until the last moments of their lives. Funeral rites and merit-making ceremonies are held for them," a source at the centre said.

There were also cases of foreigners who died outside of the hospital but were brought in for autopsies. They died of causes ranging from road accidents to drowning and suicide.

The hospital last year spent 1.3 million baht treating 17 penniless foreigners. It was the third consecutive year that the hospital had logged unpaid bills.

"These patients are mostly European men," the source said. "They didn't take out health insurance. They renew their visas every year and have no savings."

Some of them produced fake financial statements to have their visas renewed. Each foreign national seeking the renewal of his or her retirement visa must have at least 800,000 baht in their bank account or show they have earnings of at least 65,000 baht a month.

The source said foreigners' savings often were quickly used up on entertainment and women.

Some who wanted to build families in Phuket married Thai women who later took off with their money.

In a lot of cases, the patients require long-term treatment for chronic illnesses such as alcoholism and liver and heart diseases.

The source said the government should review its policy and focus on quality tourism.

Stricter screening of visa applications was needed. Foreign residents must be required to have health insurance.

The government should even set up a fund to help foreign patients with some of their financial costs, the source said.

bills - money owed to others that must be paid quickly
elderly - older people, over 65 สูงวัย, อาวุโส, อายุมาก
treatment - the process of providing medical care การรักษา
burden - a serious or difficult responsibility that you have to deal with ภาระ (See glossary)
shouldering a heavy burden - having to deal with or carry out some difficult task and responsibility
afford - to have enough money to be able to pay for something มีเงินพอจับจ่าย ซื้อหา, มีเงิน/ทุนพอ

retired - no longer working because you have reached the age where you are officially too old to work เกษียณอายุ
settling down - starting to live in a place for a long period of time, as your permanent home
struggling - having serious difficulties มีความยุ่งยาก
pension - a saving system for retirement and old age, "arrangement to provide people with an income when they are no longer earning a regular income from employment" (See Wikipedia)

local - in the area that you live
relatives -  a member of your larger (extended) family, family who does not live with you such as grandparents, uncles, aunts and cousins ญาติพี่น้อง, หมู่ญาติ, เครือญาติ
relatives back home - relatives who live in the country that the foreigner comes from (is a citizen of)
refuse - say they will not do it
embassy - a group of officials who represent their government in a foreign country สถานทูต
Public Relations (PR) - the activity of communication and creating news releases that create a favorable public image (See Wikipedia)

regard - to consider or have an opinion about something or someone เห็นว่า,ถือว่า
matter - a situation or subject which is being dealt with or considered เรื่อง, ภารกิจ, งาน
provide - to give someone something that they want or need
emergency - an unexpected situation involving danger in which immediate action is necessary เหตุฉุกเฉิน
disaster - something very bad that happens and causes a lot of damage or kills a lot of people ความหายนะ ภัยพิบัติ

ethics - a set of principles people use to decide what is right and what is wrong จริยธรรม
professional ethics - the rules that guide professionals such as doctors, nurses, architects, etc in making decisions about what is right and wrong (or moral)
rites - a traditional ceremony, especially a religious one พิธี
funeral rites - the ceremony (usually religious) for burying or burning (cremating) a dead person
merit-making - in Buddhism performing specific acts and ceremonies to build up kamma and improve one's rebirth in the next life (See Wikipedia)

ceremony -  a formal traditional or religious event, with a fixed set of meaningful formal actions พิธี
source - someone who gives information แหล่งข่าว
state - government รัฐ
record - list down, the official count made the organization

spent - used ใช้ไป
autopsy - the examination of a dead body (corpse) to "determine the cause and manner of death and to evaluate any disease or injury that may be present," performed by a specialist (See Wikipedia)
drown - when a person who dies by going under the water and not being able to breath
suicide - when a person killing him or herself การฆ่าตัวเอง
penniless - have no money
consecutive - happening one after another อย่างต่อเนื่อง
bore costs - paid the costs
health insurance - when you make regular payments to a company, who will make large payments to help you if you have a problem in the future such as an accident or are sick การประกันภัย (See Wikipedia)
renew - extend the period that something is valid and can be used (when it is about to expire and end) ต่อ

fake - made to look like something real in order to trick people  ปลอม ที่ทำปลอม, ปลอมแปลง
financial statements - formal records or reports that show the financial activities of a business, person, or other entity, as well as their wealth (assets, liabilities, and net worth), as well as income  งบการเงิน (See Wikipedia)
foreign national - a citizen of a particular country ประชาชน
renewal - increasing or extending the life of some official document or permission (driver's license, visa, passport, etc) การต่ออายุ
retirement - the time when you stop working, especially because of old age เกษียณอายุ
bank account - an arrangement with a bank to keep money at the bank

chronic - (of a disease or pain) serious and lasting for a long time เป็นประจำ
alcoholism - continued consumption of alcoholic beverages despite health problems and negative social consequences; prolonged and excessive intake of alcoholic drinks leading to a breakdown in health and an addiction to alcohol such that abrupt deprivation leads to severe withdrawal symptoms, habitual intoxication, problem drinking โรคพิษสุราเรื้อรัง, การติดสุรา, การติดเหล้า (See Wikipedia)

policy - a plan of action to guide decisions and achieve outcomes (See Wikipedia)
focus - think about and work on one thing (rather than waste time on many), concentrate time and attention on one thing ให้ความสำคัญ

Mask rule to end in June