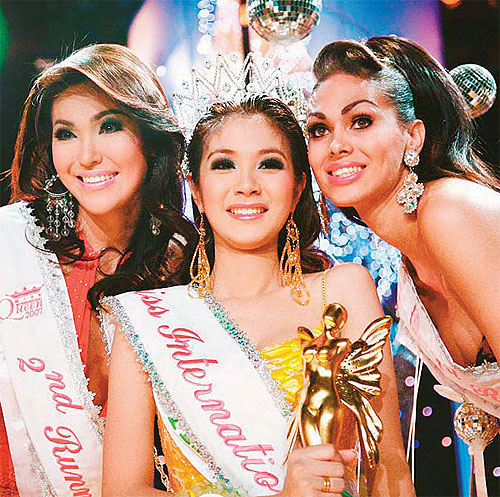 Almost every single newspaper in Thailand carried the same front page highlight last week: an image of Thanyarat "Film" Jiraphatpakorn, former Miss Tiffany 2007, Thailand's famous transgender beauty pageant, who landed a job as a flight attendant for the newly opened PC Air, which claimed to be the first in the industry to offer opportunities for third-gender people. It was not just the local media, this story got much attention from international news agencies as well.

There is something about Thailand and its tolerance of homosexuality and transgenderism that puts our Kingdom in the spotlight.

I remember last year when I visited World Expo 2010, I had a chance to talk with the organisers who were commissioned to create the Thai Pavilion. They told me that, before they came up with the whole idea of the pavilion, staff were sent to Shanghai to research what Chinese people's impressions of Thailand were.

The top three reasons unveiled were Thai hospitality, Thai food and Thai ladyboys, in that order.

Our lovely katoeys not only play a major role in highlighting queer culture in our society. Many of you may not agree, but I would say that our city itself exudes queer vibes. Think Bangkok's pink taxis, ultra-tight police uniforms or Lady Gaga's parody, Lady Plara,

All these gender-bending titbits are nonetheless what make Thailand unique. Queer or not, they are out there for us all to discuss.

Since the glorious days of our former feature section Outlook, features on gender diversity have always been among our readers' favourites. Now it's been reborn as Life, there are still fascinating stories about the rainbow society and its subculture that are waiting for us to unveil.

There were many times, however, that issues of gender diversity have been portrayed in the media only as "social issues", an attitude that fails to take into account the fun of their lifestyle - the attitude that ignores the fact that queer culture is also part of culture.

Therefore, this page will return once a month to serve you with one-of-a-kind stories about local and international lesbian, gay, bisexual and transgender scenes, and how they turn this world around like their favourite disco ball.

It was around four years ago when I had to answer an interesting question from a reader who introduced himself as a French documentary filmmaker. He asked me whether the Bangkok Post could introduce a non-celebrity transgender who did not work as a make-up artist, a beauty queen or a cabaret showgirl. And, as a writer who usually covers gender issues, the buck was passed to me.

Back then I could not think of anyone really, but today we have beautiful transsexual flight attendants who will be up in the air with the world-renowned Thai smile.

The perception of gender equality has been better recognised nowadays. And here, we hope to provide another channel to celebrate this movement of forward thinking in society.

every single newspaper - all newspapers
highlight - the best or most exciting, entertaining or interesting part of something จุดสำคัญ เรียกทับศัพท์ว่า ไฮไลท์
image - any picture, especially one formed by a mirror or a lens
Miss Tiffany - a beauty pageant for transgender people (See Wikipedia)

transgender - a person who changes the gender assigned to them at birth which includes transvestites, transsexuals, cross-dressers and others; A person whose gender may be different than that assigned at birth (See Wikipedia)
beauty pageant - beauty contest, a competition in which women (female contestants) compete by displaying their beauty as well as their personality, talent, and answers to judges' questions (See Wikipedia)
landed a job - get a job (success after searching for a job)

flight attendant - an airline worker who ensure the safety and comfort of passengers aboard commercial flights, also known as stewardess and hostess (See Wikipedia)
opportunities - situations in which it is possible to do what you want or need to do
gender - the fact of being either male or female or trangender เพศ (See Wikipedia)
third-gender people - Same as "transgender"
media - the radio, television, newspaper, the Internet, considered as a group สื่อ
local media - the media within one country (here: Thailand)
international - ระหว่างประเทศ between countries
international news agencies - companies like AP and Reuters which write and sell stories about events all over the world

spotlight - the centre of public attention เป็นที่สนใจ
World Expo - a large public outdoor show (exhibition, fair, expo) bringing together people from around the world, held in different cities around the world in which countries around the world show the rest of the world about their country in a "pavillion", the first Expo was held in London in 1851 (See Wikipedia)
World Expo 2010 - held in Shanghai, China (See Wikipedia)
chance - an opportunity
commissioned - hired to do work (usually art or music)
pavilion - a building or tent at a special ceremony, exhibition or show พลับพลา, ปะรำ, ศาลา
staff - workers, employees พนักงาน
impression -  an opinion or feeling about something you have seen or experienced a little (but do not know very well)
unveiled - announced something officially that was previously a secret เปิดเผย
hospitality - being friendly and generous with guests and visitors to make them feel welcome
ladyboy - another word for "transgendered person" (informal)

katoeys - another word for "transgendered person" (informal)
role - function or position in a situation, organisation, society or relationship บทบาท
queer - homosexual or LBGT (gay, lesbian, bisexual, transgender) people (See Wikipedia)
exude - 1. show that you have some quality, 2. coming out slowly, leaking ไหลซึมออก
vibes - feelings or an emotional experience about a person or place ความรู้สึก
exudes queer vibes - someone whose actions and behaviour shows that they are gay
tight - close against the body, sqeezing the body  แน่น, ฟิทแน่น,
ultra-tight - very tight
parody - copying a serious piece of writing or drama in a humorous way, that makes people laugh (See Wikipedia)
gender-bending titbits - little things where gender is changed (from what we normally expect it to be)
nonetheless - is true, even though what was just written seems to say it is false
unique - very special, unusual or good ที่มีลักษณะพิเศษ เป็นเอกลักษณ์

glorious - deserving great admiration, praise and honor รุ่งเรือง
feature -  a feature article, a newspaper or magazine article "written to entertain and inform the reader. It does contain some elements of the short story and is written with a lead to get the reader's attention and then uses conversational tone to present the reader with information to evoke an emotional response," a broad or in-depth newspaper, magazine, Internet, radio or TV article that discusses, analyzes or interprets an issue, subject or trend. A feature generally takes longer to research and produce than a news story" (See Wikipedia)
diversity - variety, including many different types of things or people ความหลากหลาย
fascinating - extremely interesting น่าหลงใหล, มีเสน่ห์

rainbow society - the rainbow is a symbol of LBGT society, as seen in its rainbow flag (See Wikipedia)
subculture - a group of people whose beliefs and behaviour make them different from others in society
unveil - to announce something that was not known before เปิดเผยข้อมูล

issues - subjects that need to be considered, an important subect that people are discussing and debating about  ประเด็น
portrayed - represented or described someone or something พรรณา
attitude - the way you think and feel about something, as shown in behaviour
take into account - does not address, use or touch on this issue or aspect of the subject

lifestyle - the living conditions and things people do everyday (fashion, home decoration, pets, cooking, music, tv, movies, garden, etc) รูปแบบการดำเนินชีวิต
attitude - a person's opinion and feelings about something as shown by their behaviour  ทัศนคติ, ความคิดเห็น
one-of-a-kind - the only one like it, unique

scene - a particular activity or lifestyle that people are involved with at some place (examples: the art scene in Chiang Rai, the rock music scene in Bangkok)
transgender scene - all the transgender activities and lifestyles at a place
favourite - a person who is expected to win a competition, such as an election
disco ball - a ball covered with small mirrors that reflects light sending small rays of light in many directions (See Wikipedia and photos)

documentary - a film or television programme that deals with real people and events สารคดี
make-up artist - a person skilled at putting makeup on the face of performers (for theatre, TV, movie, stage show, etc)
cabaret - "a form of entertainment featuring comedy, song, dance, and theatre" on a stage in a restaurant or nightclub with the "audience sitting at tables (often dining or drinking) watching the performance" (See Wikipedia)

perception - the way you see and think about something การรับรู้
equality - the state of being equal, especially in having the same rights, status and opportunities ความเสมอภาค
recognised - accepted as true or right
channel - a way of communicating with people or getting something done ช่องทาง
celebrate - praise, show admiration, show how special something is
movement - a group of people who share the same aim and work together to achieve it การเคลื่อนไหวเพื่อวัตถุประสงค์ทางการเมือง
forward thinking - thinking about the future and how it could change for the better (rather conservatively remain as it is)