African drug gangs offer riches and comfort to young Thai woman who then are used to transport drugs internationally.

The above map shows common routes for international drug trafficking.

As the article "13 Young Thai Women Condemned to Death in China" makes clear, the consequences of making this wrong marriage decision can be death (Read article). 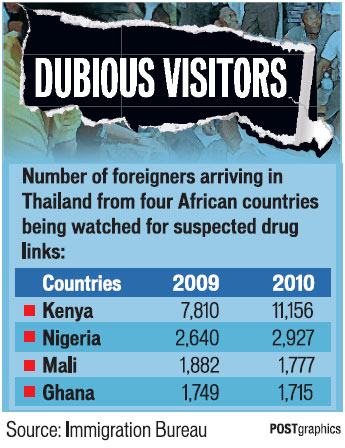 Thai women are being lured into marriage to Africans so they can work as drug mules for African drug gangs, the Narcotics Suppression Bureau says.

It has issued the warning after three Thai women who had recently married African men were found with drugs at the airport, which their husbands had asked them to bring into the country.

They were found with heroin, cocaine and methamphetamines, which they brought in suitcases from West African countries into Thailand.

The gangs, which had applied similar tactics in other Southeast Asian countries such as Malaysia, Laos and Cambodia, use these countries as Asian distribution points for their drugs, NSB chief Atithep. Panjamanond said.

African drug gangs encourage their members to marry local women in these countries, he said, citing a report by the United Nations Office on Drugs and Crime (UNODC).

Here, men who belong to African drug gangs base themselves in the provinces, often opening bars or restaurants. They meet Thai women, marry and take them home.

After making a fuss of them in their home country - usually holding out the promise of riches and a comfortable life - they encourage their Thai wives to pay a return visit to Thailand, always travelling alone.

When they send their wives back here for a visit, they give them extra bags to carry and tell them that someone will pick up the bags when they arrive.

The African men would travel to meet their Thai wives here if the bags are delivered; if not, they never see them again.

Some of the newlyweds are aware they are bringing drugs here, while others appear to have been duped, Pol Lt Col Atithep said.

"Of course we're not saying that all African men [coming here] break the law, but we do keep a close watch on people from Kenya, Nigeria, Mali and Ghana," he said.

A total of 51 Africans have been arrested at Suvarnabhumi airport in the past 12 months on suspicion of being members of drug trafficking gangs, Pol Lt Gen Atithep said.

The arrests prompted the gangs to change tactics such as adding several extra destinations to their wives' itineraries.

They hoped to conceal their real travel plans, from Africa to Thailand, which might draw authorities' attention.

The three Thai women arrested at the airport said they did not even realise they were carrying drugs, Pol Lt Gen Atithep said.

Others, however, were well aware of what they were carrying.

But they still helped to traffick the drugs into the country out of a sense of desperation.

One Thai woman who had swallowed a large pack of cocaine tried to get through immigration recently but was caught, he said.

"The Foreign Ministry issues warnings to Thai women, especially those from poor families who might fall victim to African drug gangs," he said.

"Some poor women agree to marry foreigners and follow them overseas, in this case Africa," he said.

It is only because they wanted to help their families.

drug trafficking - the buying and selling of illegal drugs inside countries and across international borders, illegal international drug trade (See Wikipedia)
drug mules - a person "who smuggles something with him or her (as opposed to sending by mail, etc.) across a national border, including smuggling into and out of an international plane, especially a small amount, transported for a smuggling organization. The organizers employ mules to reduce the risk of getting caught themselves, while often profiting most. The mule typically gets paid an amount which is small compared with the profit, but large for somebody with little money, so that it seems to him or her an easy way to make money. Sometimes the goods are hidden in e.g. the bag or vehicle of an innocent person, who does not know about this, for the purpose of retrieving the goods elsewhere" (See Wikipedia)

encourage - cause someone to gain enthusiasm, motivation, and energy in what they are doing, make people interested in and excited about doing an activity ปลุกใจ
local - women in this country (here: Thailand)
citing - mentioning as a reason ให้ อ้างอิงเหตุผล
base - a place from where an activity can be planned ฐานที่มั่น

aware - knowing that something exists, or having knowledge or experience of a particular thing ทราบ
dupe - trick a person into doing something illegal or stupid ใช้เล่ห์เหลี่ยม

suspicion - a feeling that something bad is probably true or likely to happen ความสงสัย
prompted - caused
itineraries - the list of places you going to during a trip (with dates)
conceal - hide (put in a place so it cannot be seen)
draw attention - 1. when something happens that makes people look at something, 2. make people look at something
draw authorities' attention - make government officials see some problem (realize and understand that the problem exists, so that action can be taken)
realise - to know about ตระหนัก รู้
well aware of - knew that some fact was true
traffick - to obtain and sell things illegally, especially illegal drugs ค้าขายยาเสพย์ติดหรือมนุษย์
desperation - the worry and anger felt in a difficult situation, almost impossible to solve ความสิ้นหวัง, ความหมดหวัง do X out of desperation - take action X to solve a a difficult problem (extreme action because problem seems impossible to solve)
out of a sense of desperation - out of a feeling of desperation, same as "out of desperation"
immigration - the process in which people enter a country in order to live there permanently การย้ายถิ่นฐาน
immigration - 1. people coming into a country to travel, live, and work there, 2. the controls that governments place on flows of people into the country