Closing some streets to bicycles-only can reduce traffic congestion and both air and noise pollution. 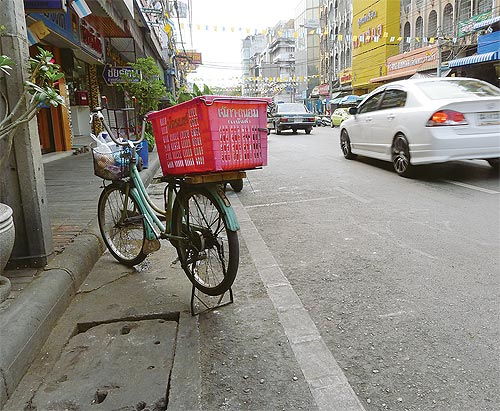 Photo above of bicycle parked in the bike lane blocking traffic.

Photo below of crowded sidewalk marked as a bike lane which clearly could cause problems with pedestrians.

This is a short part of a longer article with many photos which you can read here.

Life in the bike lane: WITH THE RIGHT APPROACH, BANGKOK CAN BECOME A CYCLING-FRIENDLY CITY by Sirinya Wattanasukchai 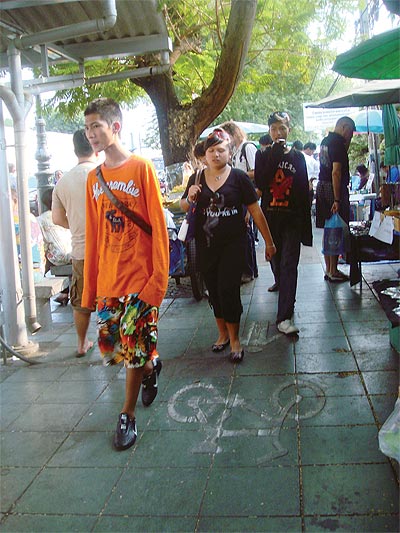 Good news for Bangkok cyclists! Thanks to its geography, the capital has the potential to be turned into a cycling-friendly city. What is needed is better understanding by the public and the government as well as a strong effort from the cyclists themselves.

...Berlin, with its wide streets similar to Bangkok's, started to encourage bicycle riding only 15 years ago and now outnumbers London in terms of cyclists; not to mention Copenhagen where cyclists are not only given space but priority on the roads...

...Thompson and the LCC have made politicians realise the fact that bicycles are a solution to help ease the strain of the tremendous growth of population and transportation of London. Unless cycling is encouraged in London, the buses, trains and tube will become overcrowded, the roads will become congested...

..."Free Wheel", a project launched on a Sunday in London, gave people the chance to experience traffic-free streets in the most congested areas of the city.

Bogota, Colombia, is very similar to Bangkok in terms of climate, but the city has successfully implemented strategies to encourage cycling. A 1.5km road now closes on Sundays to allow people to enjoy cycling, roller blading and walking on the car-free street.

Thomson prefers a separate space for bicycles even though many modern cyclists have no problem riding amid traffic.

Most importantly, cycling must be made into a chic activity accessible to everyone. Rather than associating biking with daggy reflective vests and helmets, said Thomson, it should be linked with chic things such as fixies (fixed-gear bicycles).

...We need to make people say, 'I want to belong to that club' when they see a bicycle group passing by," said Thomson. But it needs to be communicated to the public the right way...

...Thomson suggests the most comfortable distance for a cycling trip should about 5km. The best-fit model for city people is a folding bicycle that can be conveniently carried on public transportation when required...

bicycle - รถจักรยานสองล้อ, รถถีบสองล้อ bike - short form of "bicycle" bike lane - a narrow area along the side of roads that is for bicycles only to ride in  ทางจักรยาน
cycle (verb) - ขี่รถจักรยาน, ถีบรถจักรยาน cycling (noun) - the activity of riding a bicycle cyclist (noun) - a person who rides a bicycle

Life in the fast lane - meaning: a fast life, with high risk and high possible reward...or failure... Life in the bike lane - a play on words with "life in the fast lane"
capital - the city where the central government of a government is located เมืองหลวง
potential - what is possible, what could possibly happen ความเป็นไปได
effort - the energy and enthusiasm that people put into an activity, an attempt to do something ความพยายาม

London Cycling Campaign (LCC) - "an independent membership charity lobbying for better conditions for cyclists in London. Its vision is to make London "a world-class cycling city". It is the largest urban cycling organisation in the world, with 11,000 members" (See website and Wikipedia)

encouraged - act to make other people have more confidence or hope about something มีกำลังใจ
fellow - people who are similar to you (like you), in the same situation or doing the same activity เพื่อนร่วมชะตากรรม
fellow cyclists - people just like you who like to bicycle (enthusiasts)
initial - early, first, happening at the beginning of a process ในเบื้องต้น
initial planning stages - just beginning to make plans for a project (so it will be a long time before the project starts)

encourage - give energy to continue doing activity, motivate, make people interested in and excited about doing an activity ปลุกใจ
X outnumbers Y - group X contains more people than group Y
in terms of - measured by
X not to mention Y - X is an example to prove a point and Y is an example that even further proves the point
priority - something important that must be done first สี่งที่สำคัญเป็นลำดับแรก

climate - the general weather conditions usually found in a particular place สภาพอากาศ
implemented - when a plan is put into action, actually doing the things in a plan
strategies - long-term plans to achieve goals, long-term plans for success in competition, for how to succeed in the future กลยุทธ, นโยบาย
roller blading - inline skating, "inline skates usually have 2 to 5 Polyurethane Wheels, arranged in a single line. The in-line design allows for greater speed than Rollerskates and better maneuverability," roller blades are actually one brand of "inline skates" (See Wikipedia on inline skating and inline skates)

chic - fashionable and sophisticated
accessible - can be used by
daggy - not fahsionable (messy, dirty, unpleasant)

reflective vests - clothing that can easily be seen in every environment, including low light night situations (See Wikipedia and also bicycle lights)
helmets - bicycle helmets, "a helmet intended to be worn while riding a bicycle. They are designed to attenuate impacts to the skull of a cyclist in falls while minimizing side effects such as interference with peripheral vision. There is an active scientific debate, with no consensus, on whether helmets are useful for cyclists, and on whether any benefits are outweighed by their disadvantages" (See Wikipedia)

fit - being the right size and shape (to be used for some use or purpose)
best-fit - the thing that has the best size and shape (for some use)
model - one type of a kind of vehicle or machine (being sold)
best-fit model - the vehicle or machine that is best size and shape for some use
folding bicycle - a bicycle designed to fold into a small and compact form for easy transport and storage, can be more easily carried "into buildings and workplaces or onto public transportation (facilitating mixed-mode commuting) — or more easily stored in compact living quarters or aboard a car, boat or plane" (See Wikipedia)
convenient (adjective) - easy to do or use (without problems or difficulties)
conveniently (adverb)
public transportation - ways of getting between places used by large numbers of people, such as buses, trains, planes, ferry boats, etc