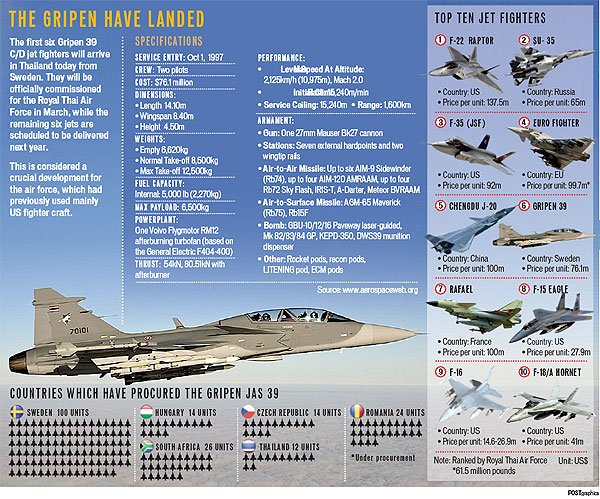 The new computer system on the Gripen fighters [pronunciation] would provide them with flight information linked to the other fighters on a screen before them.

The jets would also link with the systems of US-made F16 fighters as well as hooking up with navy ships. The frigate HTMS Naresuan would be the first to be linked with the fighters.

A Saab 340 Erieye airborne early warning aircraft that the air force also bought from the Swedish government would be connected to all the Gripen fighters.

In the photo on the right: Gripen fighter jet pilots are given a warm welcome after the Swedish-made aircraft landed at Wing 7 base in Surat Thani. The air force is buying 12 fighters worth nearly 40billion baht to replace ageing F-5A/B aircraft. The first six jets arrived yesterday. SURAPOL PROMSAKANA

Six Gripen jet fighters have landed in Surat Thani where they will wait to be officially handed over by the Swedish manufacturer.

The fighters, flown by Swedish pilots, made a smooth touchdown on the runway of the Wing 7 air force base about 7.30pm yesterday after leaving Sweden on Feb 18 and stopping over in Hungary, Greece, Egypt and India en route to Thailand.

They are the first batch of 12 Gripen 39 C/D jet fighters that will replace the ageing F-5A/B jets. They will become the pride of the air force which was allocated almost 40 billion baht to acquire the state-of-the-art planes.

Two air force pilots who have undergone training on the Gripens in Sweden flew with the six jets. However, they took the back seat in the planes commanded by Swedish pilots because the jets technically still belong to Sweden.

The jets will be inspected and officially handed over to the air force next month.

He said his experience with the fighter was unforgettable.

"The Gripen is very cool indeed. For me, it's the number one fighter," he said.

It's different from the F5 jet I've flown before. It's like a sedan and a sports car. Thailand is the only country in Asean to operate the Gripen

The jet can also be fitted with weapons which are now used on the US-made F16 jets, Gp Capt Putthipong said.

The air force is sending 10 more pilots to train on the aircraft as the other six jets are due to arrive in Thailand next year. Gp Capt Putthipong said F5 and F16 pilots were extremely keen to become Gripen pilots.

F5 jet - a light jet fighter "designed and built by Northrop in the United States, beginning in the 1960s. Hundreds remain in service in air forces around the world in the early 21st Century, and the type has also been the basis for a number of other aircraft. The F-5 started life as a privately funded light fighter program by Northrop in the 1950s. The first generation F-5A Freedom Fighter entered service in the 1960s. Over 800 were produced through 1972 for U.S. allies during the Cold War" (See Wikipedia)

F16  - a jet first developed for the US air force, "over 4,400 of this jet aircraft have been built since production was approved in 1976...the aircraft is used by the USAF aerial demonstration team, the U.S. Air Force Thunderbirds, and as an adversary/aggressor aircraft by the United States Navy. The F-16 has also been selected to serve in the air forces of 25 other nations" (See Wikipedia)

airborne early warning aircraft - "an airborne radar system designed to detect aircraft. Used at a high altitude, the radars allow the operators to distinguish between friendly and hostile aircraft hundreds of miles away. AEW&C aircraft are used for defensive and offensive air operations. The system is used offensively to direct fighters to their target locations, and defensively to counter attacks. It can also be used to carry out surveillance, and C2BM (command and control, battle management) functions" (See Wikipedia)
airborne - in an airplane in the air above the earth

Saab 340 Erieye airborne early warning aircraft - "an Airborne Early Warning and Control System (AEW&C) developed by Saab..The radar provides 300 degree coverage and has an instrumental range of 450km and detection range of 350 km in a dense hostile electronic warfare environment—in heavy radar clutter and at low target altitudes. In addition to this, the radar is also capable of identifying friends or foes, and has a sea surveillance mode. The Erieye system has full interoperability with NATO air defence command and control systems" (See Wikipedia)

frigate - a smaller, lighter warship used for reconnaissance more than heavy fighting, larger than a destroyer and smaller than a cruiser (See Wikipedia and Google Definitions)
reconnaissance - the use of soldiers or aircraft to go into an area and get information about an enemy การลาดตระเวน (See Wikipedia)
frigate HTMS Naresuan - "(Thai: นเรศวร) hull number 621, commissioned in 1995, is a modified version of the Chinese-made Type 053 frigate, designed and built by the China State Shipbuilding Corporation in Shanghai. Her sister ship, HTMS Taksin was delivered in November 1995. The ships came at 2,000 million baht each, much less than the 8,000 million baht price tag for Western-built frigates" (See Wikipedia)

official - approved by the government or some authority ที่เป็นทางการ
handover (noun) - the formal process of giving the responsibility for something to someone else การส่งคืน, การส่งมอบ
handover X to Y (verb) - formally and officially give X to Y (ownership and responsibility for looking after)  ส่งคืน, ให้, คืนให้, ยื่นให้
fighter - a high speed airplane used in war to destroy enemy aricraft in the air (See Wikipedia)

touchdown - the arrival of an airplane to the place it is going (also called a "landing") การลงสู่พื้นของเครื่องบิน
smooth touchdown - when the plane does not jump up and down during landing due to wind and rough weather
runway - the long strip where a plane takes off and lands ทางขึ้นลงของเครื่องบิน
route - the way that planes, buses, trains, or ships travel regularly เส้นทางของรถ เรือ เครื่องบิน,etc.
stop over - stopping in a place for a period of time while travelling on a journey
en route to - during the time that you are travelling to, while travelling to

batch - a group of things or people dealt with at the same time or considered similar in type ชุด, กลุ่ม
Gripen 39 C/D jet fighters
replace - to get rid of something old and put something new in their place หาคนมาแทน  เลิกให้และนำสิ่งใหม่มาใช้แทน

pride (noun) - a feeling of pleasure and satisfaction that you get when you, or someone connected with you, have achieved something special ความภาคภูมิใจ
proud (adjective)
take pride in - to have feeling of pride about
the pride of Y - something that every member of group Y is proud of
allocated - given for a special purpose or use
acquire - to get; to obtain ได้มาซึ่ง
state - condition or state สภาพ
state-of-the-art - using the newest and most advanced features and ideas

commander - a military or police offer of high rank ผู้บังคับบัญชา
conduct - to do something in an organised way; to carry out
executives - a high level manager in a company (making plans and ensuring they executed successfully) ผู้บริหาร
training - to teach people how to do an activity or job การฝึกฝน
technically - according to an exact understanding of rules, facts, etc.
cool - impressive ดีเลิศ (คำสแลง)

sedan - a closed car with a front and back seat for passengers รถยนต์ส่วนบุคคลสี่ประตู
sports car - a small low car with a high-powered engine; usually seats two persons; an automobile designed for high speed and power, tight handling, and flashy looks  (See Wikipedia)