Small health clinics in remote areas can catch some diseases like cervical cancer early before they are life-threatening. 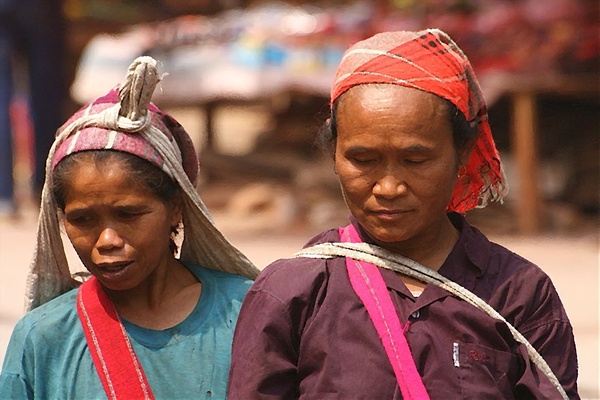 Photo above of women of the Lua ethnic group.

'Pap smear month' is the latest initiative in a disease prevention drive improving the lives of communities in remote areas.

Dozens of ethnic Lua women in Mae Chaem district have converged at the tambon Najorn health promotion clinic this month for pap smears.

This is "pap smear month" for women aged 30 or over in this mountain tambon wanting to test for cervical cancer.

Wang Kulsawasdimongkol, 44, is among the residents who took a day off from work on the farm to have a pap smear at the clinic, which provides an annual cancer test for Najorn residents each February.

At first, she was afraid of the test, but after going for checkups every year for the past three years, she no longer is. She now realises that frequent cervical and breast cancer checkups are vital.

I have a cousin who died from cervical cancer a few months ago. I don't want to be like her," she said.

In a remote district like Mae Chaem, providing health prevention services, including pap smear tests for women at risk of cervical cancer, is not only good for patients but also community hospitals.

They can earn extra money from the National Health Security Office (NHSO), which pays them to run the scheme. That extra money can help offset the budget shortfalls they normally struggle with.

The tambon Najorn health promotion clinic, where Mrs Wang received her pap smear, is one of 12 primary healthcare units under Mae Chaem community hospital, which receives state funding to run the prevention scheme.

The hospital tried to overcome the problem by reviewing budget management efforts and training staff to work on disease-prevention campaigns.

The hospital also developed a patient database for both itself and the network of 12 primary care units in its jurisdiction, including the tambon Najorn health promotion clinic.

The database shows that lung cancer caused by smoking is a major cause of death among the highlanders, while cervical and breast cancers have also increased in recent years

The hospital launched a cervical and breast cancer prevention campaign in 2009. Pap smear tests are provided every year, with a target of reaching 20% of the 10,000 women aged 30 or above in the district.

The NHSO has allocated about 700,000 baht from its prevention and health promotion fund to support Mae Chaem hospital's health prevention campaigns.

Public health staff pitched in to conduct screening tests and promote the campaign to reach the target population, even though it increased their workload.

Winai Sawasdiworn, NHSO secretary-general, said Mae Chaem Hospital could be a model for small-scale hospitals and health promotion hospitals in remote areas looking for ways to strengthen their financial status and health services.

Over 200 state hospitals were running a combined deficit of more than four billion baht earlier this year, prompting the Public Health Ministry to ask the NHSO to help cover the deficit out of concern that budget constraints could impinge on medical services.

(Source: Bangkok Post, Health, Highland healthcare boost, 27/02/2011, Apiradee Treerutkuarkul, link)
cancer - "any malignant growth or tumor caused by abnormal and uncontrolled cell division; it may spread to other parts of the body through the lymphatic system or the blood stream" (See Wikipedia and Google Definitions)
malignant - "the tendency of a medical condition, especially tumors, to become progressively worse and to potentially result in death" (See Wikipedia) tumour - "a swelling or enlargement caused by overgrowth of cells within the body or any organ of the body" (See Wikipedia and Google Definitions)

cervix - "the lower, narrow portion of the uterus where it joins with the top end of the vagina" (See Wikipedia)
uterus - an organ of the female reproductive system in which the young are conceived and develop until birth; the womb (See Wikipedia) cervical cancer - a cancer in the cervix area of women, "Human papillomavirus (HPV) infection is a necessary factor in the development of almost all cases of cervical cancer." (See Wikipedia)

Human papillomavirus (HPV) - a virus that transmitted from one person to another during sex, can cause warts and certain kinds of cancers (See Wikipedia)
Human papillomavirus vaccine - a vaccine that "may prevent infection with certain species of human papillomavirus associated with the development of cervical cancer, genital warts, and some less common cancers" (See Wikipedia)
vaccine - an injection that helps a body fight and resist a disease, "a biological preparation that improves immunity to a particular disease. A vaccine typically contains an agent that resembles a disease-causing microorganism, and is often made from weakened or killed forms of the microbe or its toxins. The agent stimulates the body's immune system to recognize the agent as foreign, destroy it, and "remember" it, so that the immune system can more easily recognize and destroy any of these microorganisms that it later encounters" (See Wikipedia)
smear - to spread a soft of liquid substance over a surface in an untidy way รอยเปื้อน
pap smear - a test used to find out if a person has cervical cancer (See Wikipedia)

highland - areas of a country located in the mountains boost - increase
initiative - a new plan for dealing with a problem or achieving some goal ความคิดริเริ่ม
prevention - the act of preventing something, or things that people do in order to prevent something
drive - a planned effort to achieve something การผลักดัน,ความพยายาม
disease prevention drive - a government program aimed at reducing the number of people who suffer or die from a disease
remote - far away, distant ไกล, far away from cities, difficult to get to ที่ห่างไกลจากความเจริญ (ของเมือง)

residents - people who live in a particular place or area ชาวบ้านในบริเวณ ผู้อาศัยในบริเวณ
day off - a day when you don't work (a non-work day)
take a day-off - when a person chooses not to work one some day, take a one-day vacation
annual - happening once a year ประจำปี

frequent - happening often เกิดขึ้นบ่อย
vital - very important, extremely important; necessary for the success or continued existence of something จำเป็นสำหรับชีวิต; สำคัญมาก, ที่จำเป็นยิ่ง
risk - the possibility that something dangerous or unpleasant might happen ความเสี่ยง
community - the people living in one particular area ชุมชน

National Health Security Office (NHSO) - the government agency repsonsible for running the universal "30 baht" healthcare program
scheme - a plan that is developed by a government or large organisation in order to provide a particular service for people แผนการ โครงการ
offset - move in the opposite direction, reduce by moving in the opposite direction, counter-balance, compensate in the opposite direction ("x offsets y" means "x reduces the effect of y"), make up for (profits from the manufacturing business offset losses from the retail business) (See glossary)
budget - the amounts of money that an organisation has available to spend on different things during a period งบประมาณ (See Wikipedia)
shortfall - not enough, a scarcity
struggle - a very difficult task that you can do only by making a great effort ความพยายาม

overcome - solve a problem or put and end to a difficulty ต่อสู้อุปสรรคจนสำเร็จสำมารถดำเนินการต่อไปได้
overcome a problem - solve a problem
reviewing - looking closely at some activity to decide whether it is working well (working correctly, working effciently)
budget - the plan for spending money within an organization over a future period (home to be spent in each department, on different projects and programmes)
budget management - the managing of how money is spent inside an organization or company
efforts - the hard work done towards achieving some goal ความพยายาม
training - to teach people how to do an activity or job การฝึกฝน
staff - workers, employees พนักงาน
campaigns - a long series of events staged to achieve a goal or to promote something (for example, an "anti-smoking campaign")
disease-prevention campaigns
patient - someone who is receiving medical treatment คนป่วย, คนไข้
database - a large amount of information stored in a computer in an organised way ฐานข้อมูล
network - a large system of connected parts, organisations, people, etc. เครือข่าย
primary care units - the first place (clinic) where people who are sick go to meet a doctor and get help and treatment
jurisdiction - the power and authority within an area to enforce laws

launched - started เริ่มต้นดำเนินการ
campaign - a series of actions intended to produce political or social change การรณรงค์, การกระทำการหรือวางแผนเพื่อให้บรรลุตามเป้าหมาย
target - a goal
allocated - given money or resources for a special purpose or use
fund - money provided for some special use or purpose เงินทุน กองทุน
support - help, by giving money, for example สนับสนุน
improve - to make better ทำให้ดีขึ้น
role - what a person typically does in an organisation or activity; function, position or purpose in a situation, organisation, society or relationship บทบาท

public health - "the science and art of preventing disease, prolonging life and promoting health through the organized efforts and informed choices of society, organizations, public and private, communities and individuals" (See Wikipedia)
pitched in - helped (when a group of people all volunteer and join together to help another group that is having a problem)
conduct - to do something in an organised way; to carry out
screening - checking for problems, safety, or suitability
population - all the people living in a country, city or other area or region
workload - the amount of work that a worker must do each day ปริมาณงานที่คนหรือเครื่องจักรทำได้ระยะเวลาหนึ่ง
dental fund - money to pay for the dental treatment of some group of people
extend - to include something more ยืดออกไป ขยายออกไป
essential - necessary and important ที่จำเป็น ที่สำคัญ
remote highland communities - villages located in the mountains far away from any city

scale - size (relative size)
small-scale hospitals - hospitals that are smaller in size
status - the state, condition or situation at a particular time สถานะ
deficit - when you spend more than you receive, not enough income to cover expenses, when money spent (going out) is greater than revenues (taxes coming in)
cover the deficit - providing the money equal to a deficit (so the organization does not have to borrow it)
prompting - causing
concern - a worry ความกังวล
X out of concern that Y - do X because worrying about Y
constraints - things that limit possible action and solutions to problems
budget constraints - when you don't have enough money to do what you want to do
impinge on - have negative effect on